So, last night Heatwave's bashment concert "Showtime". I anticipated this will be the greatest one night show I've been to in a long while. An incredible line-up. In fact, it's an inconceivable line-up mainly due to the sly headliner and inspiration for the event - Wiley. For those unfamiliar with him, you may know him as the Godfather of Grime, but he is also the self-proclaimed "The Elusive" for his consistency at performing no-shows. The guy doesn't turn up for his own or featured videos, promo or performances. To help avoid this, the DJs/Promoters kept in contact with him and he assured them every time he'll be there. Hope they don't mind me telling you, but Wiley was unreachable for days leading up to the event causing a bit of "Ahhh man, not again Wiley". [cue intentional cliffhanger music]

You see all those names, yeah? Legends in Jungle, grime, garage, UK dancehall next to both current and hot upcoming. Past, present and future all representing on the night. I've never seen a line-up with such diversity.

I got there from 8.30pm to an empty venue. To be expected really, doors opened at 7. DJ's were running through some early warming selection with throwback 80's dancehall tunes by the likes of Frankie Paul, Tenor Saw and Supercat. My favourite of them had to be when @DanBean "Peeny Peeny" by Shabba Ranks. Hadn't heard it in a while, plus the system pumped the bass nicely. Reminded me that digital age dancehall is way ahead of its time. Let's take a second to re-live (or get acquainted with) that tune.

I sat on the stage chatting up... sorry chatting it up with Tim & Barry's titty Tuesday's winner Eleni about the cake I didn't get to eat. The place filled up nicely, people began to buss a dance to the sweet sounds of reggae musc while Serocee & Rubi Dan held down the mic as people entered.

Before introducing the first acts to the stage, horns were handed out. Dancehall/carnival atmosphere in full effect. Sero and Rubi called for Mr Williamz, Stylo G and Lady Chann but ended up getting more than we asked for. I thought, "This will be sick" but it was sicker than that. Mr Williamz was the only one of three to touch stage. Gabriel dropped Stalag riddim to open Heatwave Showtime (I think it was that anyway). Missa Williamz is one of my fave from the new UK bashment scene. His style is reminiscent of Supercat (he looks Apache too) complete with cool and deadly delivery like the Wild Apache. He's then joined on stage by General Levy who causes absolute mayhem with the fast chat style many know from Jungle but actually goes back to Saxon Sound. YT appears from out of nowhere to help shell the Come Down riddim.

Supercat performing Come Down in Japan 2007

Lady Chann is the first lady to touch mike (childhood humour in me chuckled) on the night. Punanny is the riddim. Reloads are what happens. Stu$h joins her, they embrace with a big hug, touches mike, crowd erupts again. Hear what, I'm kinda pissed I never took a pic of them. What a way their outfits TUN UP!!! I won't be unprofessional, I'll post the pics when they are up. But, yeah, believe me, actually I'll quote Bounty Killer "Gal dem have di face and dem have di figure" from Benz and Bimma

Next up, mid-90s UK dancehall king Glamma Kid dropped his famous Moschino lyrics and received 3 forwards (DJ rewinds the track from beginning) for his troubles. Fast-rising dancehall artist made his entrance with Stylo one of his many current heaters "Call Me A Yardie" lyrics. Mr Williamz returned with a tour of London, then General Levy ran up with Jungle chat to crazy forwards again. YT joined in too.

That ended the first part. DJs ran through some songs including Baby Cham "Ghetto Story", Mavado "So Special" etc.

[Wiley Watch/Where's Wiley: Are you still reading, wondering if the elusive Wiley shows up to Showtime? If not, the time is now 11:30 and the show finishes at 1am. Help build it up? Good]

The second and final half begins with a tribute to UK music legend from the dancehall scene, Smiley Culture, who died in police custody under suspicious circumstances currently under further investigation. Fellow Saxon Sound member Asher Senator blesses the place after we dance a dance to Smiley's "Police Officer". Together with an apprentice, Asher performed "Character Reference".

At this point of the review, I realise I haven't quoted many of the lyrics from the night. Partially because I was in awe of the occasion, too busy buss gun finger and there were too many.

At this point, I climbed on stage to take pics 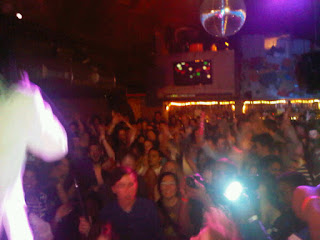 See the gun fingers? Says it a quarter of it. The noise reached deafening levels with all the shouting, braap'ing and horns. Wait until the video drops.

Wiley Watch/Where's Wiley: At this point the host informs us Wiley is backstage. These times I saw him walking through the crowd to exit the immediate dancefloor space. I wondered if he went outside or exited because he didn't touch microphone straight away. I dunno, doesn't sound logical but since when did Wiley do things by logic. It's pure emotion and impulse.

Smiley's brother Merlin Emmanuel gave a brief speech about deaths in police custody and urged people to support the cause. In the meantime, I went to the smoking area to get reception.

Them time there I see Wiley. He never went home. At this point, you may be thinking "'Llow watching man, man." BUT this is my blog so I'll tell the story as I please. Yeah? Alright then, we'll continue.

Wiley is intro'd on stage, and walks up with Riko - another who was on the missing list prior to the event. DJ Gabriel broke the bashment rules, dropping the Wiley's classic Ice Rink . Riko set pace with Wiley shouting "Boom!" repeatedly. Wiley's first bar "It's Wiley and I'm gettin' 'em hyper" *wheel* 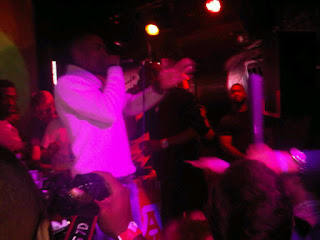 OMG moment: Fellow Roll Deep member Flowdan turned it into a three-way when he announced "It's the big Flowdan". Somewhere along the lines Pow 2011 mixes in, Wiley "bududuadadada" *Wheel* Flowdan threw it back to the original Pow "Fi start bun a MC" out comes Stylo G with old skool "My Yout'" bars, General Levy jumps in, Stu$h does "Dollar Sign" bars - complete and utter pandemonium! Another jungle legend Skibadee is introduced "Deal with the matter, deal with it proper". Curtains for every other event I've been to this year. Possibly ever on that scale (non-arena event).

The event didn't finish there. Serocee, Seani T, Mr Williamz, YT and Riko killed Sleng Teng and couple other riddms during a pass the mic segment. Riko is so sick on dancehall.

Lady Leshurr made a late appearance but managed to buss up Touch A Button next to General Levy, Skibadee and Stylo G.

So, basically if you missed it, don't blame me. It really was one of those once in a lifetime occasions. Watch when the video drops. Legends past and present with hot upcoming artists = Murderer