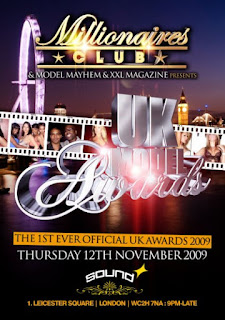 Contrary to what some may believe, I am not a guy to belittle people's aims and dreams or business ventures. Where people get it twisted is because I'm the guy who tells you "Nah blud that's some heeedeyat ting!" I'm no Rev Run, my advice is: If you're gonna do something, do it properly! Ask anyone who I've had meetings with, I will always be the one shutting down foolishness. Not in a big head way.

From the flyer, you may think "Why you hating?" but who holds an awards show in Sound nightclub? The clubs called Sound but the PA sound in their is atrocious. And I swear there's only 4 speakers in the whole club? Looks hmm alright, but its some any West End club. Along with Rainforest, back in the days, Sound was the last resort club after you weren't let in the decent ones for rolling with too many man & wearing trainers. You can get in there with scuffed trainers! I would feel over-dressed wearing a pressed shirt and my nice jeans (come on, everyone has their nice jeans), so it hasn't got the glitziest of reps. How are the seating arrangements gonna be? Or is it a stand-up ting where winners push their way through to the stage after the award presenter repeats "Is she here?" That's the first problem.

Second are the categories:

Best Portfolio? We know majority of "UK Models" in the urban scene are Facebook based who find out about jobs via Facebook messages sent by agencies. They receive them on their BlackBerry's which hold the pins of many Facebook rave promoters, Funky MCs and a few comedians so they believe they are certified. Taking all that into consideration, are they accepting Facebook albums? I know a couple girls who have nice "Random" pics taken on aforementioned BlackBerry's, forearm all up in the shot whilst looking in the opposite direction so they appear to be striking a natural pose/candid pic (even though we see you're pouting). How about "Model Portfolio" albums? The ones in them photoshoot places in West End where females get make up done, bring your raving clothes and leave with your best photoshopped pics on a CD-R?

Most Improved? This is the 1st Awards so what are we comparing with? Split before and after pics? Pics of girls from them photobooths at tube stations with their hair gelled down on their forehead? Or we gonna take it to MySpace albums?

Best Glamour Model, Best Fashion Model, Best Lingerie Model. Sounds alright. Problem is whether it be here or America the only avenue I've seen for urban models are glamour and lingerie. I'm genuinely interested in seeing these Fashion models. That sounds like a good thing.

Best Submitted Picture, Facebook? Is that gonna be like a Best Newcomer or Star Search type award?

International Model of the Year? Why? It's the UK Models award. Why even embarrass yourself by adding this award? We know the international model won't turn up. Should have kept it UK. And what are the boundaries? Can Tyra enter? Melissa Ford? Or will it go to Amber Rose?

Uk buffie the body. I like the sound of this award. Basically the biggest batty award yeah? That Grace Addai girl should get that without a doubt. Her back-off was hand-crafted by Jah-Allah, no word of a lie. I'm man enough to say I probably couldn't handle her, but I'd give it 1000% in effort.

Excuse my ignorance with the above, maybe it's exclusive to those who are signed to an agency *shrugs*. All these questions arose because modelling is some free-for-all. We know the power of Facebook, everyone has equal measure in something like "modelling". Could have quashed all of that by naming the nominees or wrote "All nominees are provided by X, Y, Z agency". Here's to hoping it isn't like that and everything's good on the night *raises glass of Apfelsaft*. We know how females get all catty at the best of times, these are models. Haven't watched it since Eva won but Amercia's Next Top Model is a prime example. These ambiguous award nominations could lead to a couple Kanye-worthy moments. Can't complain too much 'cos it's promoting models, and we all love models!

This is what turned my innoncent chuckles to SMH as the suspicions of Facebook promoters trying a ting became apparent:

THIS SHOW WILL BE HOSTED BY Choice FMs “KAT”

DRESS CODE: SMART|SEXY & STYLISH! STRICTLY NO HOODS, HATS, TRACKSUITS OR ANY STREET WEAR! (Ladies, no denim!!) Remember you will be entering on the red carpet, so look sharp!!

Kat is a sick host, one of the best I've seen, so good look on that. Show starts at 11.30pm? 2330 hours? Are you serious? On a Thursday? Ok. We know these things are never on time so could be anytime. 1st 300 ladies free "b4" 11? You've made an effort with the dress-code but personally as mentioned before I'd feel overdressed in Sound. I would have suggested 8.30/2030. This just reeks a normal club with the added extra of picking up some sexy girls in attendance. If you want to be taken, give the impression you are serious, otherwise support from external people won't really come in. Everyone starts somewhere but it was more serious than that.

Mandem, forget rent/mum's rent, buy some big bottles of champers, come up with a catchy punchline then pretend you are an aspiring funky MC with your tune "Got Bare Dough/Drink Some Champs/Whine Down Low" getting nuff hits on YouTube and at the very least you'll get an add on Facebook, maybe a pin. If you execute your facade properly, you've bagged a model chick. Oh yeah, you must have a BlackBerry Bold or Curve.

p.s. Don't take this as me cussin, take it as PR! Send me couple tickets, supply me a few models to choose from (you know like Rush Hour 2?) and we'll say I've done you a good deed ;)

p.p.p.p.s. If UK Stunner's January, Pia Brown doesn't win something I will not be happy. She does this ting on so many levels. With clothes on as well as bikini. And she's smart too

That is a natural pic. Stunner!!!