May 01, 2015
Now let me set this off right, I've felt away about the reaction to this for a while but I didn't have the right words to say at the time. Now I've formulated all my thoughts, I present this post to you. I'm not late, I'm on Marvin's time. And there's no time like Marvin's time.

So if you aren't familiar with the story, Chronixx posted this the day everybody got a boner 'cos Obama said "Greeting's massive. Wah gwaan, Jamaica?" The picture was deleted not long after. 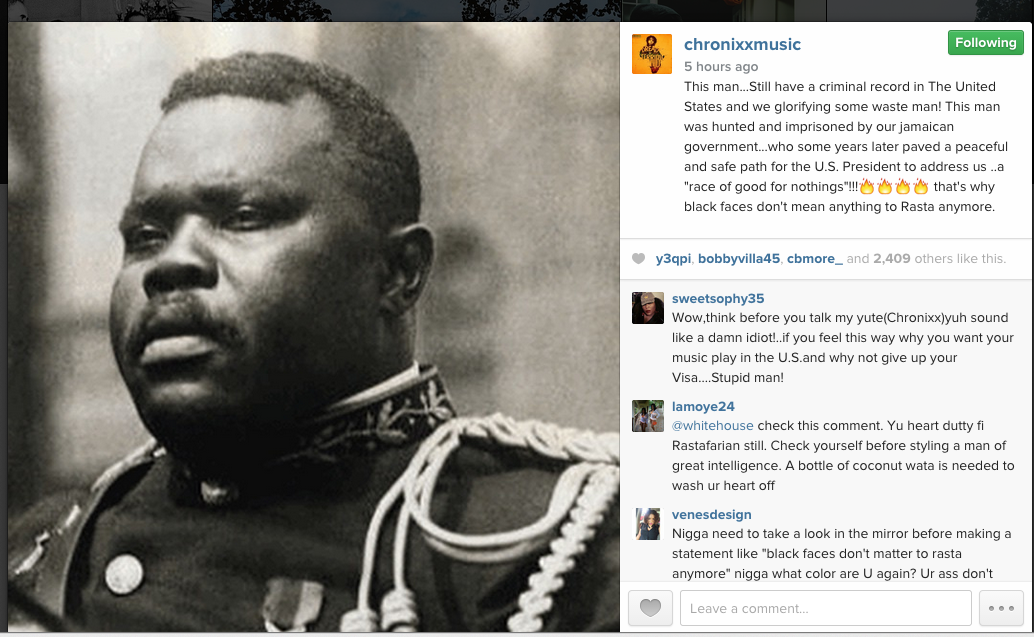 Loads of people got really upset by this. And I mean, REALLY UPSET. Like, ABSO LIVID, MATE! The young artists page was inundated with comments ranging from "How dare you call Obama a waste man" to "Your VISA should be revoked".  Woah, woah mate, slow down innit. Funniest comment was in response to said "revoke visa" comment, which said "Revoke yu madda…" Mi laugh so til.

(Basically, Jamaican artists require a visa to perform in America.)

The worst thing is said was missed by everyone. What did he mean by "race of good for nothings". That's only bit I thought was potentially a bad decision.

But anyway onto the real stuff...


One thing I've learnt in these social media times is there are two sides of people in any controversial situation; people with sense and the fassies. Today I wanna talk about the fassies. Everyone has the right to an opinion they say. Fair enough. But, NO! Some of these people are basically wanting reggae artists to be sell-outs. Reggae artist have always put the fire on anything they deem wrong. Many have made a living off it.

But now its against the rules and out of order? Why's that? Oh, because he's (half) black and says "Wah gwaan?" when really, the main reason he went to Jamaica is to stop them getting too friendly with the Chinese and the region away from Venezuelan oil [insert "allegedly"?]?

Outside of that, I understand his opinion is something that divides. However, the derogatory talk about Rasta and calling Chronixx a fake dread is totally unnecessary. Chronixx is a man before he is of any faith or livity. To bring that in is disrespectful and shows people's true colours. Things like "That's the problem with you Rasta's, you think you're too good".

Evolution time now. After all the talk...judge and you shall be judged my elders say. I don't mind the judgement of my Human family. I expect to be judged and told when I'm wrong...that's actually a very healthy thing for me. Now for you....remember the words of the Likkle one from Spanish town said. The media will take it from here, twist it in the best interest of their "story". And the struggle continues. Let jah be praised in all things. I read all the comments and now I see who is who! Love. May the teachings of our beloved Marcus Garvey forever take root in our hearts. May the leaders of today take counsel in his divine teachings. May the leaders of tomorrow reap the fruits of his timeless works.
A photo posted by SteamMinistah (@chronixxmusic) on Apr 10, 2015 at 1:10am PDT


He replaced the controversial post with the one above. Check the comments on the mobile app 'cos most don't appear on the web version.

So we've spoken about what they said. Now's time to talk about why I believe they said it. A) a lot of people don't love themselves. Yeah, its true. And mi nah tek back nuh chat. B) people believe Obama is immune to cussing. Imagine America had a white president right now, would all these police killings happen without the president facing serious criticism? Asking 'cos my sister asked me.

But most importantly C) nuff people think the whole reggae revival is fake and a fad. A lot of people ride the Chronixx wagon because it's cool. Jamaican media talk of this whole movement like its something to be proud of, but that's mainly due to his appearance on Jimmy Fallon.

Bob Marley wouldn't do it? People don't understand how rebellious and revolutionary he was. They think this accepted and sanitised version of Bob Marley is how it was back then. You think it was cool to say "Cause I feel like bombing a church, now/ Now that you know that the preacher is lying" or "Some people think great God will come from the sky/ Take away everything and make every everybody feel high/ But if you know what life is worth/ You will look for yours on Earth" in a Christian country like Jamaica? You think it was alright to be a Rastafarian in those times?

Same people saying "Bob Marley wouldn't do that" don't know how against the tide Bob actually was. Don't be fooled by his appreciation now. And then there's the other side who say if you've got anything to say, put it in a song. We live in multimedia time. There are many ways to get your point across. An interview, Twitter, Insta whatever. It's a new day. Wake up!

People need to understand Chronixx is a man before he is a Rasta and a musician. If you want to judge him, judge him as the man he is. Don't come with these big fantasy ideas of how he's supposed to act because the expectation and standard you expect him to live at. And on the same foot, don't think your insecurities and colonised mind make you right. Cos you aren't.

And with that we dash a quick lava.

By the way, he named his US tour "Capture Land" and UK tour "Reparation". Rate that absolute goon move please. Thanks in advance.