February 17, 2015
So I went to the Reggae Valentine's show on Sunday night (15th February). First thing's first; big up the organisers - solid line up and nice change of venue. Too often these shows are just heritage acts at the Brixton Academy. The Academy is a big venue so it seems like promotors are limited with artists. Well, giving them benefit of the doubt. 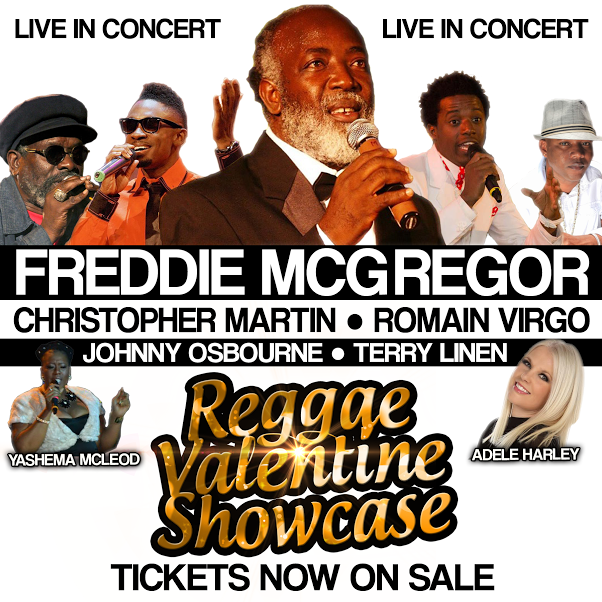 Show started promptly at 7:30. Anybody that's been to a reggae show in the past will know how much of a big deal this is. Too often, Sunday night shows don't really pay attention to the fact tube finishes early, meaning a long journey back for people, who in some cases either miss the last half hour of the show or go across London on a mission. Leave's a bad vibe and people will eventually say they aren't going to Sunday shows as a result. Thankfully, this ended at 11pm on the dot!

Back to the show now, first lady, Yeshma McLeod sang a couple covers - Sam Cooke "Change Is Gonna Come" (strange one for me considering its a lovers event) and Joss Stone "Super Duper Love". Decent. Adele Harley from Leeds sang an original song then covered Ed Sheeran's "Thinking Out Loud" on the riddim for Louisa Marks's classic "Sixth Street" (I know her from the Louisa cover) - really strong performance and good reception from the crowd.

Those two were only on for about half an hour (good thing) and the venue filled up pretty quickly from being 3/4 empty to half full (always look on the bright side of life *whistles*). Bobo El Numero Uno introduced the first (known) act of the night, Terry Linen. Been a fan of this guy for a while so it was a pleasure to see him finally at his first London performance (well, first show of that magnitude anyway. He may have done clubs).

Set it off with the popular cover of Whitney Houston "My Love is Your Love" in a cover-filled set. R. Kelly "Storm is Over" and "The World's Greatest", plus a Garnett Silk tribute medley including "Splashing Dashing" and "Mama Africa". I'd never realised how much he sounded like Garnett until seeing him live. Then the host said he's Garnett's first cousin - learn something everyday! Only downer was "No Time To Linger" as part of a medley (the band reacted quickly to put the correct riddim under him) and "Couldn't Be The Girl For Me" reduced to a single line. That's my favourite song of his! Solid performance otherwise.

I expected the host to introduce Christopher Martin next, but they thought they'd spring a surprise on us and present Romain Virgo. Big mistake! He was my tip for performance of the night. Not only does Romain Virgo have the more suitable catalogue (much closer to traditional lovers reggae), he's a better performer than many of his peers. Future legend in the making.

(Downstairs is packed now, by the way.)

Opening with "I Want To Go Home" followed up by "Taking You Home", "Love Doctor" and "Rich In Love" without time to take in the moment. Straight lovings for the ladies from early. He definitely paid attention to the romantic script. Women like putty in his palms right now. Guess what he did next? His them with the powerful cover of Sam Smith's future classic "Stay With Me". First forward of his set. "Everlasting Love" on Chimney's Tropical Escape riddim got the medley treatment as Virgo dropped a bit of Chronixx "Ain't No Giving In" and Tarrus Riley's "Gimme Likkle One Drop". Medley's were a big thing last night, by the way. Tributes and covers too.

Speaking of tributes, Romain's tribute to Buju via "Love Sponge" and Sanchez went down extremely well, but the soul classic bit had the women going absolutely mental! I'm not gonna say which songs he does cos it'll spoil it should you ever see him live but we'll say R. Kelly, Marvin Gaye and others sung with passion to perfection. Ending was a bit of  downer, "Can't Sleep" should've closed not "Who Feels It Knows It". Performance of the night for me.

(Please continue to read. It's still worth it.)

So yeah, Christopher Martin, really difficult for him for reasons I mentioned before. His songs aren't that big over here. When that's the issue, his tender voiced, quick delivery singjay style makes his lyrics slightly harder to appreciate if they're unfamiliar. "Cheaters Prayer" drew biggest cheers, disappointingly moderate response to "Paper Loving" and Passenger "Let Her Go" cover (big songs!) and "If I Were A Carpenter" could've done with an introduction in form of tribute to John Holt.

Bizzarre moment when he mistakenly credited Bob Marley's "Hypocrites" to Dennis Brown, pulled it out the bag when he did Bushman's "Fire Pon A Weak Heart". Sam Cooke and Marvin Gaye covers were impressive and well-received. Finishing with "Mama" and "Just Like You (Daddy A Mi General)" were a bit of an anti-climax. Solid vocal performance ultimately hindered by placing on the bill.

Dancehall general, Johnny Osbourne (read "Junny Uzbern" in Jamaican), gave us the penultimate performance of the night. Highly anticipated due to lack of appearances since forever - except last year at Studio One vs Treasure Isle. Highs: "Ice Cream Love", "Truth and Rights", "Jah Promise" and obviously "Buddy Bye". No "Water Pumping" though (as my dad pointed out). His outfit was immaculate - bright red suit, jazzy shirt, black tam, chunky chains and rings. Looked exactly how a '80s dancehall star should. I took notes for when I appear on red carpet in the future.

I'd never seen Freddie McGregor perform until this year - don't ask why 'cos I don't know. Now, I've seen him four times. This was probably the best performance I've seen. Longer time slot obviously means more time to go through the repertoire. "Push Come To Shove" got the biggest forward. I will love that song forever and ever. It's the perfect song.

I dont recall a dull moment. Whether it was roots songs ("Africa Here I Come" and "To Be Poor Is A Crime"), lovers ("Let Him Try", I Was Born A Winner" and "Just Don't Wanna Be Lonely") or covers (Dennis Brown "Here I Come", Heatwave "Always & Forever" or a John Holt song I didn't recognise), crowd went mental. We all caught the spirit when he ended with Justin Hinds & The Dominoes "Carry Go Bring Come" topped with church chorus "Wings of a Dove".

Freddie called out all the performers to sing Bob Marley's "One Love" for the encore and we all went home feeling irie. Top, top concert. Thank you to the promoters for mixing up the line-up. Big up all the crew inside. Concert finished bang on 11pm. That's how you do a Sunday night concert.