February 14, 2015
So, as you should know 6th February is the day both Bunny Rugs from Third World and Bob Marley were born. Neither are with us in physical, however they're both strong in the world of music.

Bob Marley's birthday was celebrated with events across the island. I was fortunate to go to two. Maddest thing is I didn't even plan to be there for his 70th, I noticed the week before. Great coincidence. Must've been a blessing from the above.

February is reggae month in Jamaica, it begins with Dennis Brown celebrations as its his birthday on the 1st (I went down to Dubwise Wednesday for a tribute session. Big up Yardcoore) and there's loads of other events (including wicked ones for free) going on.

However, we're here to talk about Bob Marley's birthday celebrations. On the day itself, I went down to the Bob Marley museum at 56 Hope Road for the 'Legacy Continues' show. Very surreal experience. Like, I'm really at Bob Marley's house on what would've been his 70th birthday. And we were all there for the same reason, so it was a big community - Rasta's and baldhead's alike. Bob's a prophet. In years to come, there could be a religion after him. I mean, Rasta globally is more down to a love and raspect for Bob Marley than anything else if we're totally honest.

I walked in as percussionist Bongo Herman was on stage playing some songs - mainly covers and that of songs such as Sugar Minott "Oh Mr DC" and others. He was followed by the Uprising Roots band. Both delivered good enough performances for the slots.

Bob's famous blue Land Rover had been taken off display in the museum for a couple years as it was being restored. I know it's at least a couple of years because they mentioned it when I was there in 2013. I didn't even realise they would be unveiling the restored version on the day. It was only when I was told to get off a platform I stood on, I looked to my right and saw the Land Rover sign and they announced they'd be revealing it.

Quite a few Marley's (namely Julian, Rohan, Kymani and Cedella, plus grandchildren Donisha and others) pulled a cream sheet off the car following a short video about the car's importance to the family, times they went to school in it and farming they did. The mechanics from ATL gave accounts on the car's bad condition and why they felt it should be cleaned up because its a valuable asset from Bob's life. 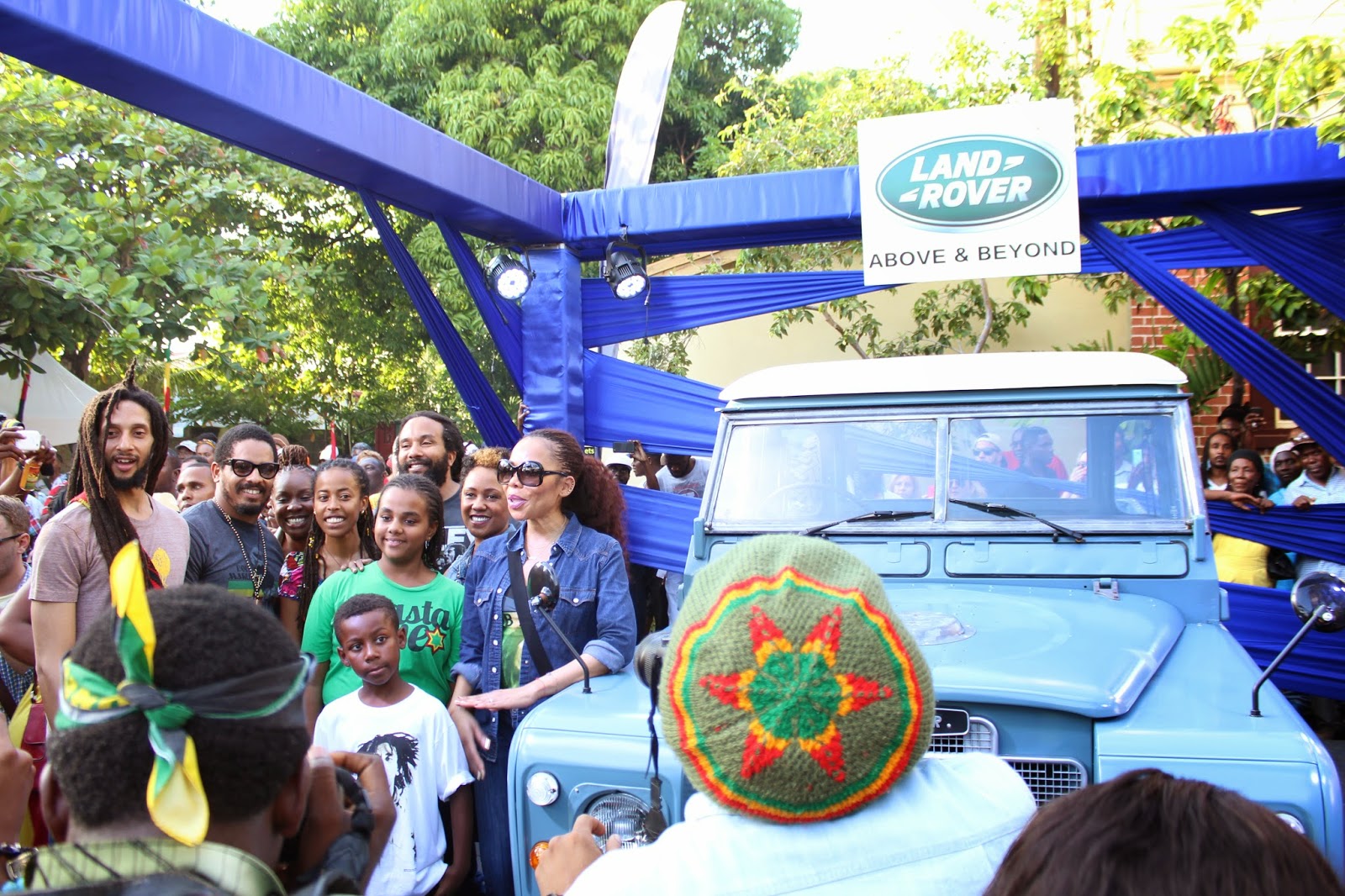 First of the Bob Marley ambassadors, Iba Mahr, stepped up after some celebratory balloons were let off into the sky. 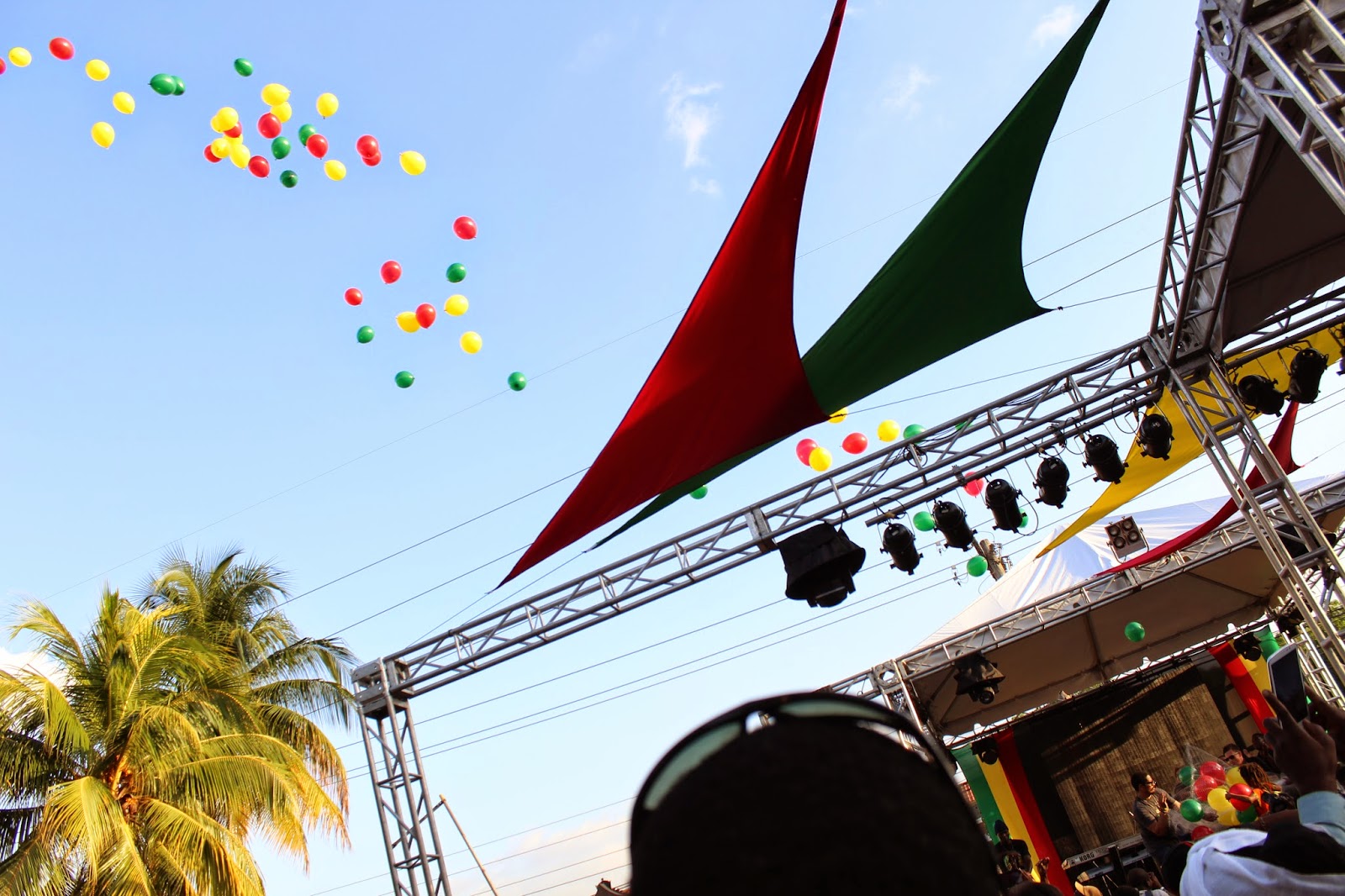 Moderate response for songs such as "Let Jah Lead The Way" and "Will I Wait In Vain" into a cover of "Waiting In Vain" (see what he did there?). I felt he deserved a better reception to be fair. Maybe his stuttering delivery was slightly harder to understand than usual, but still, we were there to celebrate. 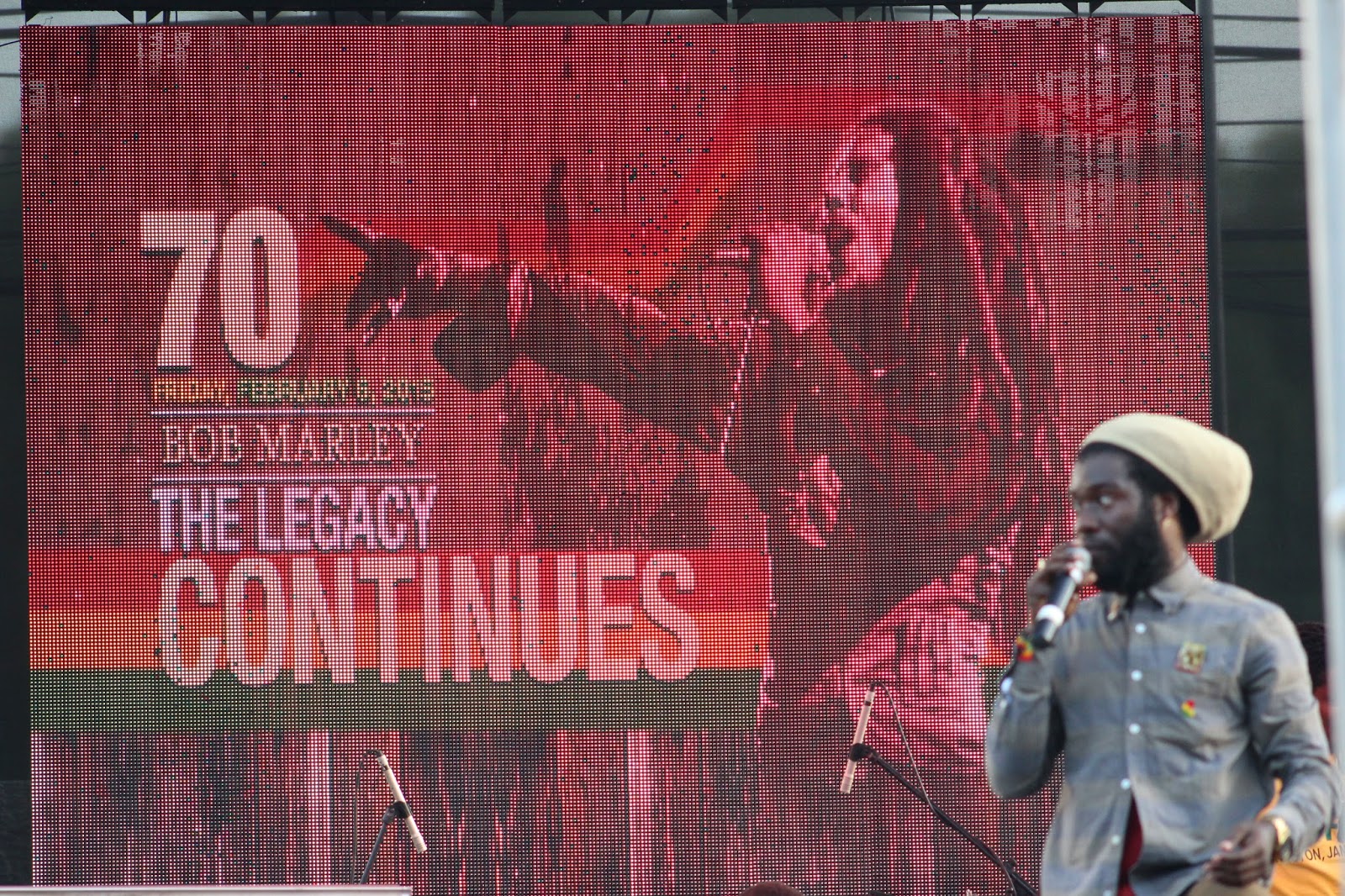 Anyway, big reaction when he brought out one of the best Jamaican entertainers right now - Tarrus Riley. The two performed their remix of Iba's "Diamond Sox". 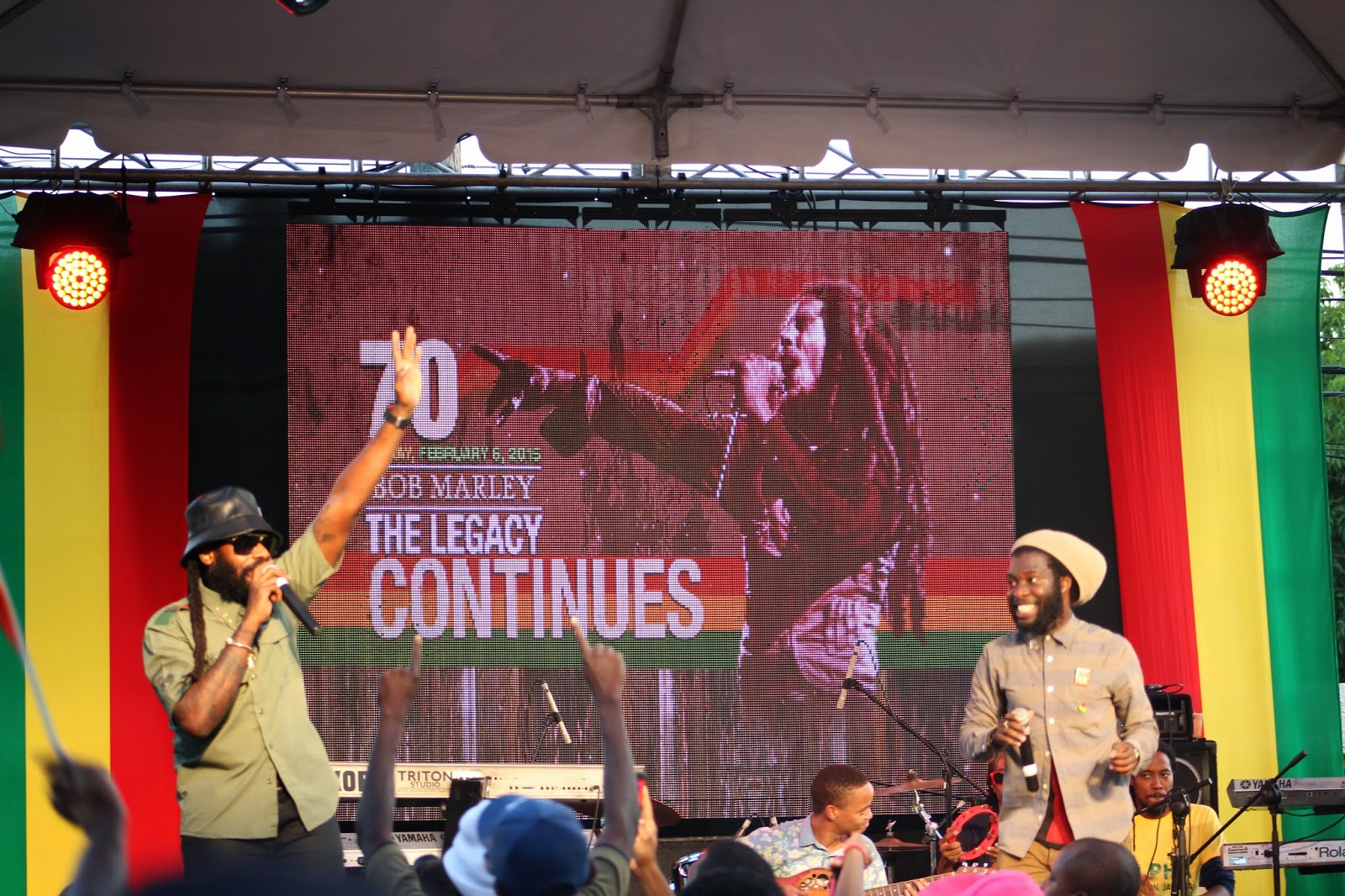 Prolific lyricist Kabaka Pyramid stepped up next, bringing his brand of rebel music to our ears. By the way, the whole thing was an unplugged session. Real rootsy and stripped back. The Chronixx-featured "Mi Alright" drew the best response, other songs performed included two personal faves "Well Done" and "Waiting For You". He found a way to intertwine Bob's songs based on Haile Selassie's UN speech "War" into "Never Gonna Be A Slave". He's gonna take on the road hard this year. 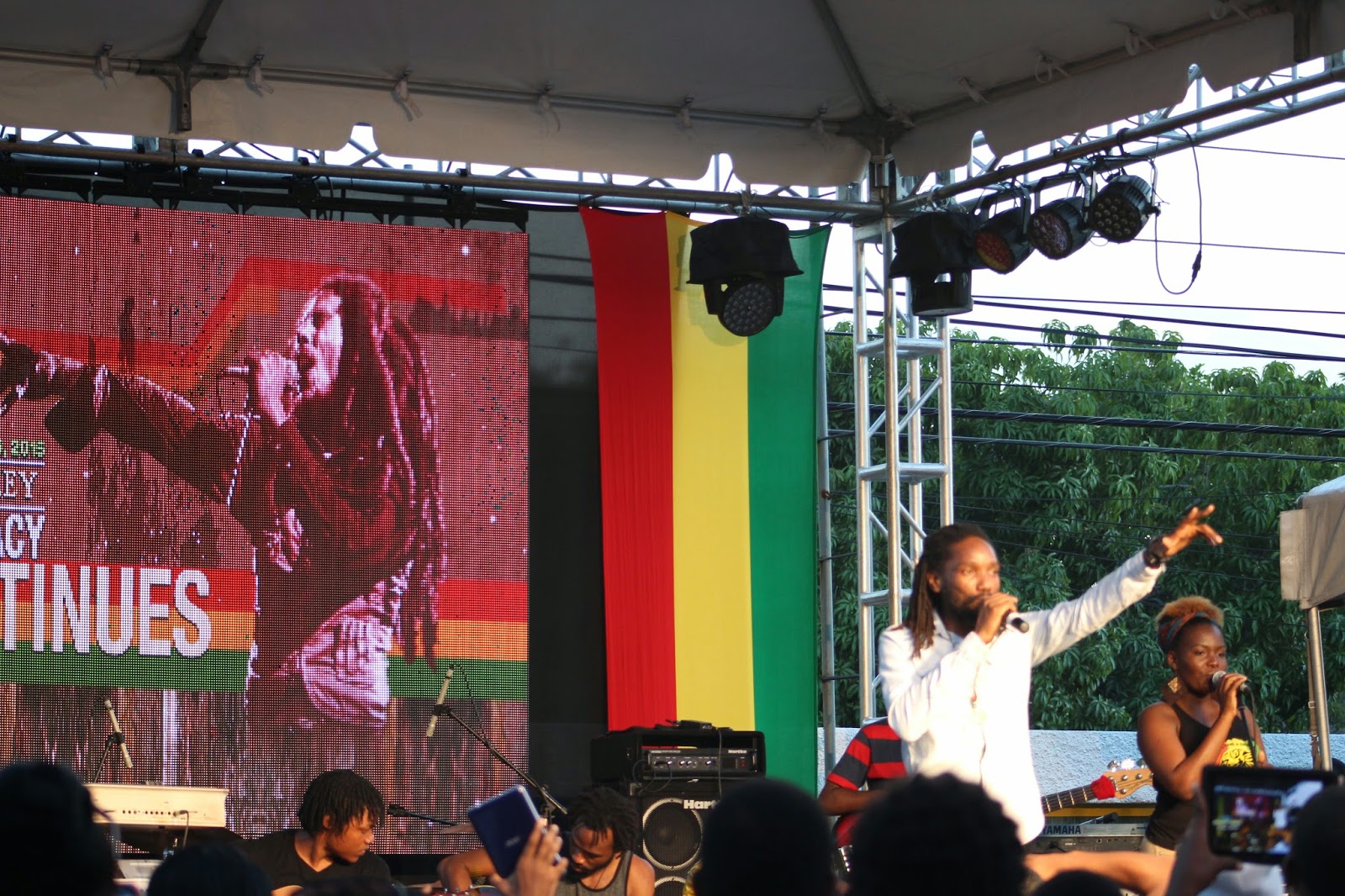 Never really appreciated the No-Maddz before. Like many others, I couldn't get into them as serious musicians. All seemed a bit north coast hotel tourist-friendly to me. However, having seen them live a couple of times and feeling their new stuff, I'm a fan. Really impressive live band, good interaction and really strong vocally. Their signature song "Rise Above Profanity (Poo Pukku Poo)" alongside newer songs "Romance" and my favourite "Shotta" from the Sly & Robbie presents project. Their Bob covers were "Time Will Tell" (big forward!) and "I Shot The Sheriff". 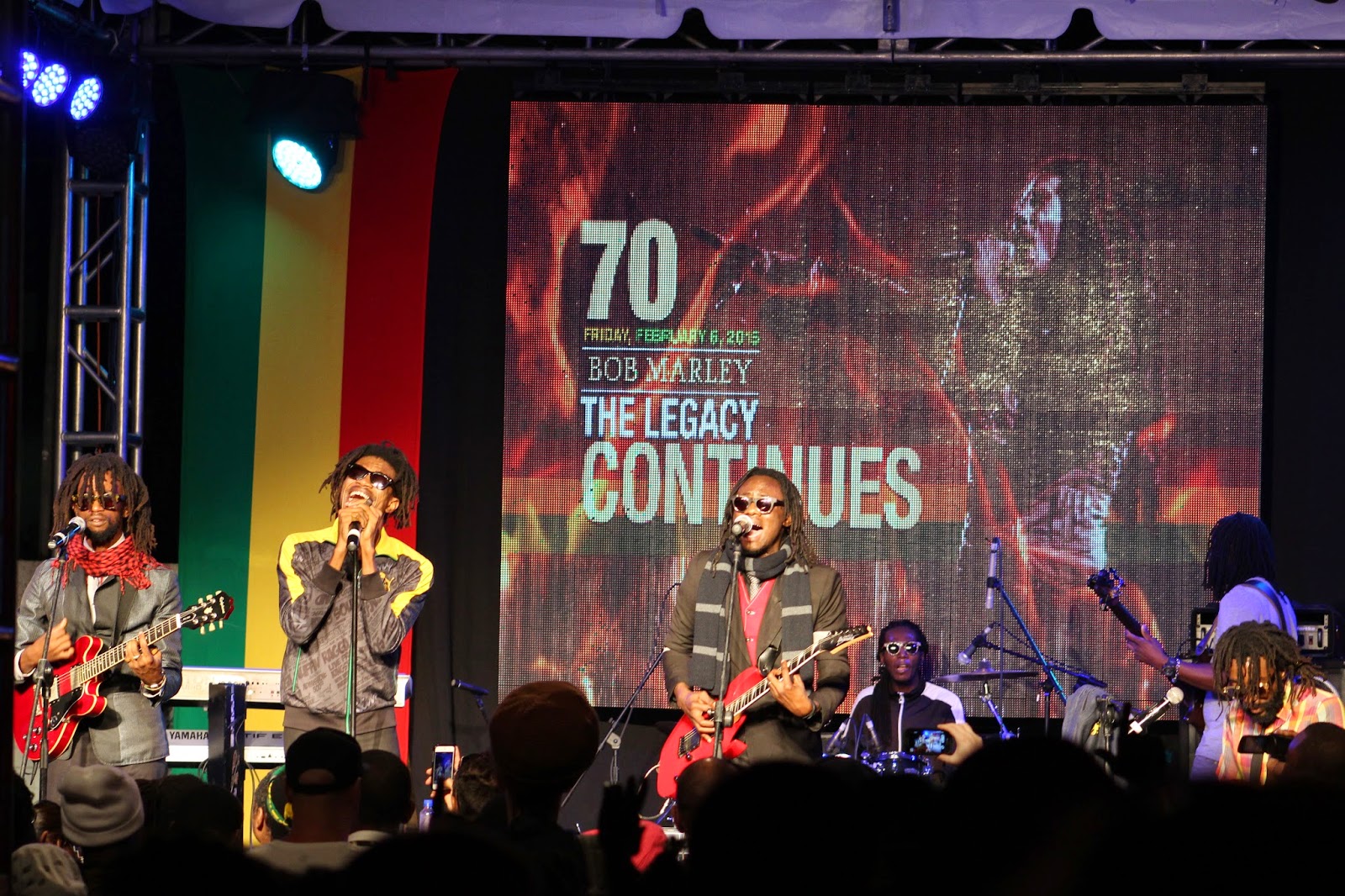 Headliner Chronixx did as Chronixx does. Deliver. Taking the causal setting to the best of his ability, he spent majority of the set sat on a chair surrounded by his band, admitted he hadn't rehearsed but stated he was prepared to perform anything. Hearing "Smile Jamaica" and "Capture Land" in Jamaica was special for me. He interpolated "Slave Driver" into the latter. "Like A Whistle" is his current hit in Jamaica, one the crowd were fully involved in holding lighters and flashing light on phones in the air.

Before he left the stage, he addressed why he rarely appears at big Jamaican festivals, saying they never wanted to book him years ago and he doesn't believe in charging people in Jamaica to see him. Oh and he threw some thinly-veiled words on the Jamaica Jazz and Blues festival who spend big money on foreign acts who don't sing (aka Mariah Carey) instead of helping homegrown performers. He announced his first tour of Jamaica, which will it won't be free of charge (crown chuckled), it'll be as close to free as possible. 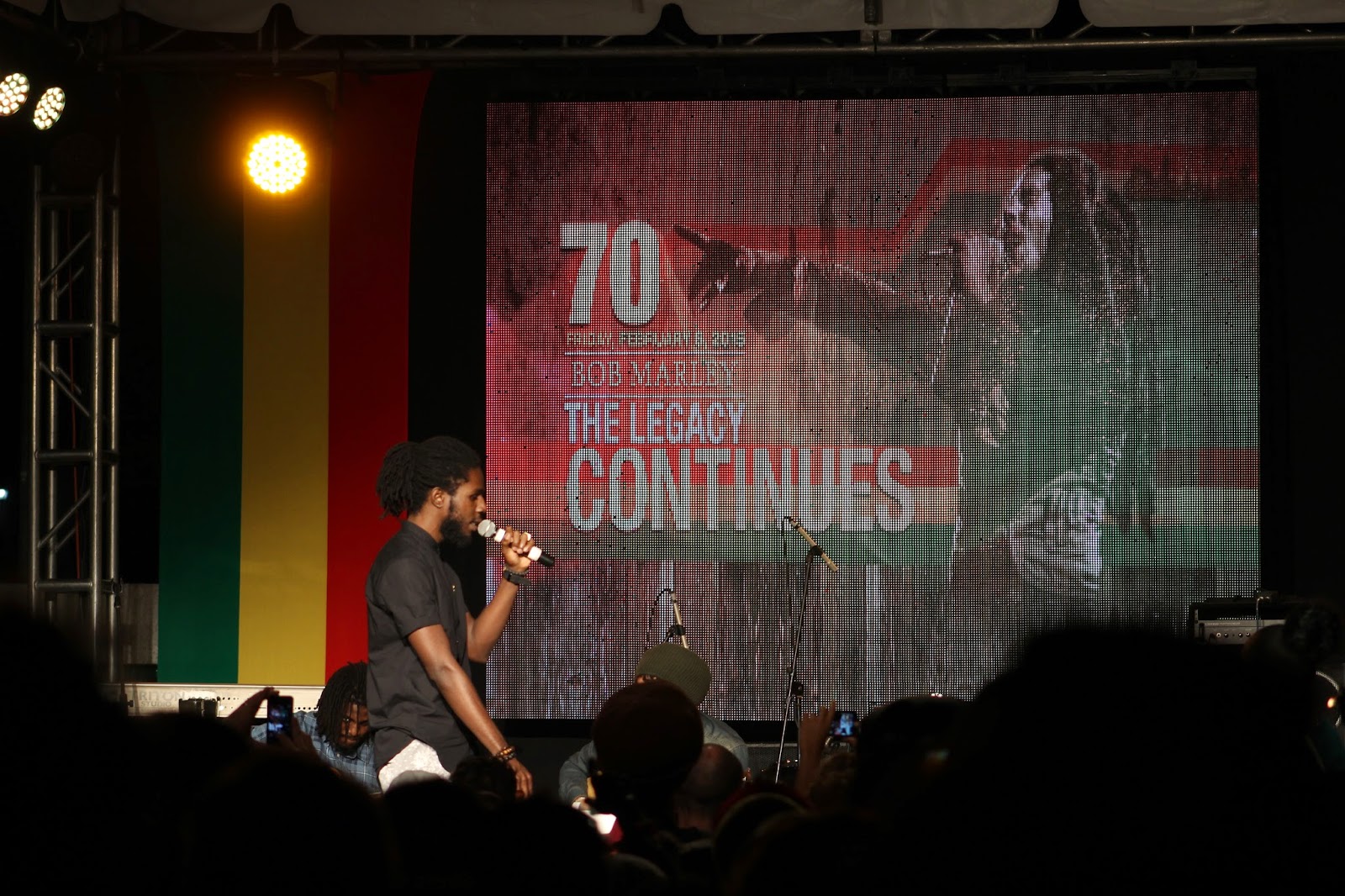 (Funnily enough, I closed the night watching Gully Bop. That was a moment I'll remember.)

Second night of celebrations was in form of another free concert, this time in downtown Kingston, down by The Waterfront. Walked into the place at approx 7:30pm as Tarrus Riley was finishing. Proper annoying. Since when did Jamaican shows a) start on time and b) bring out big artists so early. Show only began at 6pm. Gutted. Heard he shelled down, brought out Iba Mahr and Chronixx too. Trusss me, that isn't what you want to hear when you arrive. 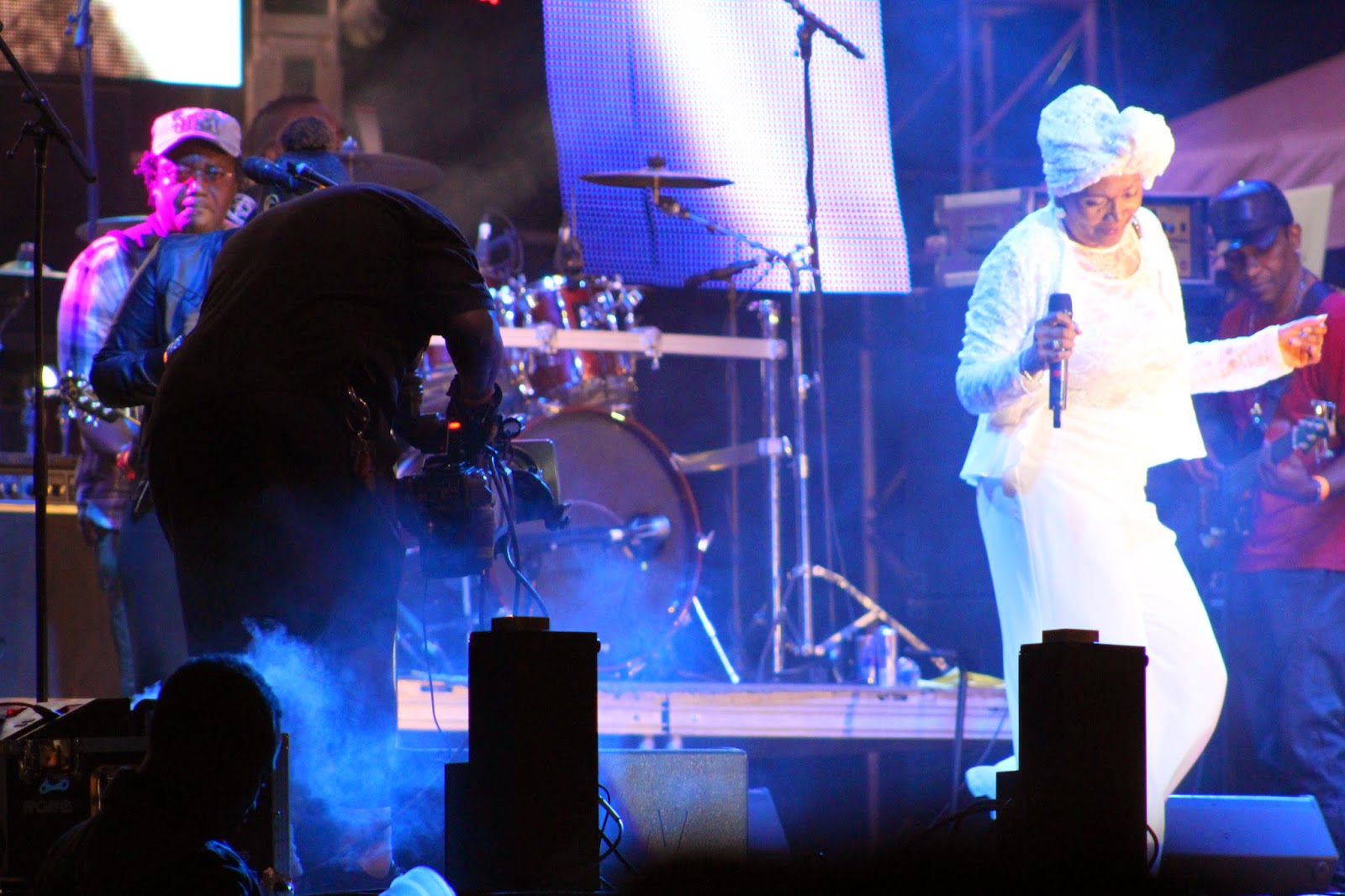 1/3 of the I-Threes Judy Mowatt sang a few gospel-infused reggae hits and covered one of my fave Bob songs, "Thank You Lord". 2/3 of the I-Threes, Marcia Griffiths, had the crowd rocking with classics "Dreamland", "Feel Like Jumping" and "Fire Burning" including Cutty Ranks's deejay part before bringing out fellow I-Threes member, Judy Mowatt, to perform a medley of Marley classics ("Put It On", "Mr. Brown", "Small Axe", "Keep It Moving" and "Trenchtown Rock"). 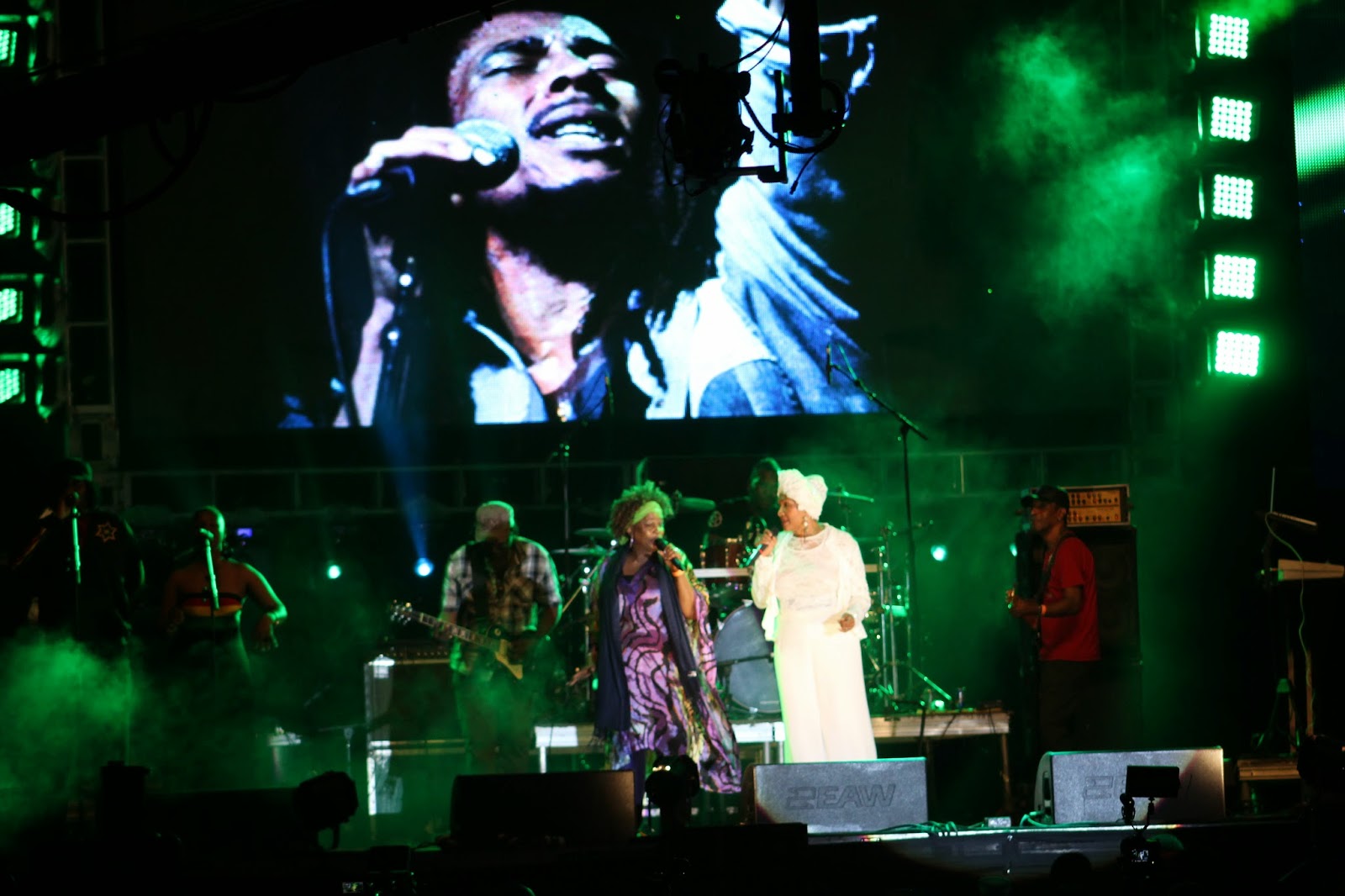 Cocoa Tea is a man who never, ever fails to be contender for performance of the night. Seriously, this guy is ever on point. Selection, interaction, catalogue and delivery are top notch. Bob Marley cover "Zimbabwe". "Every man got a right to decide his own destiny" = first reload of the night. I'd never heard that song in that kinda space before. 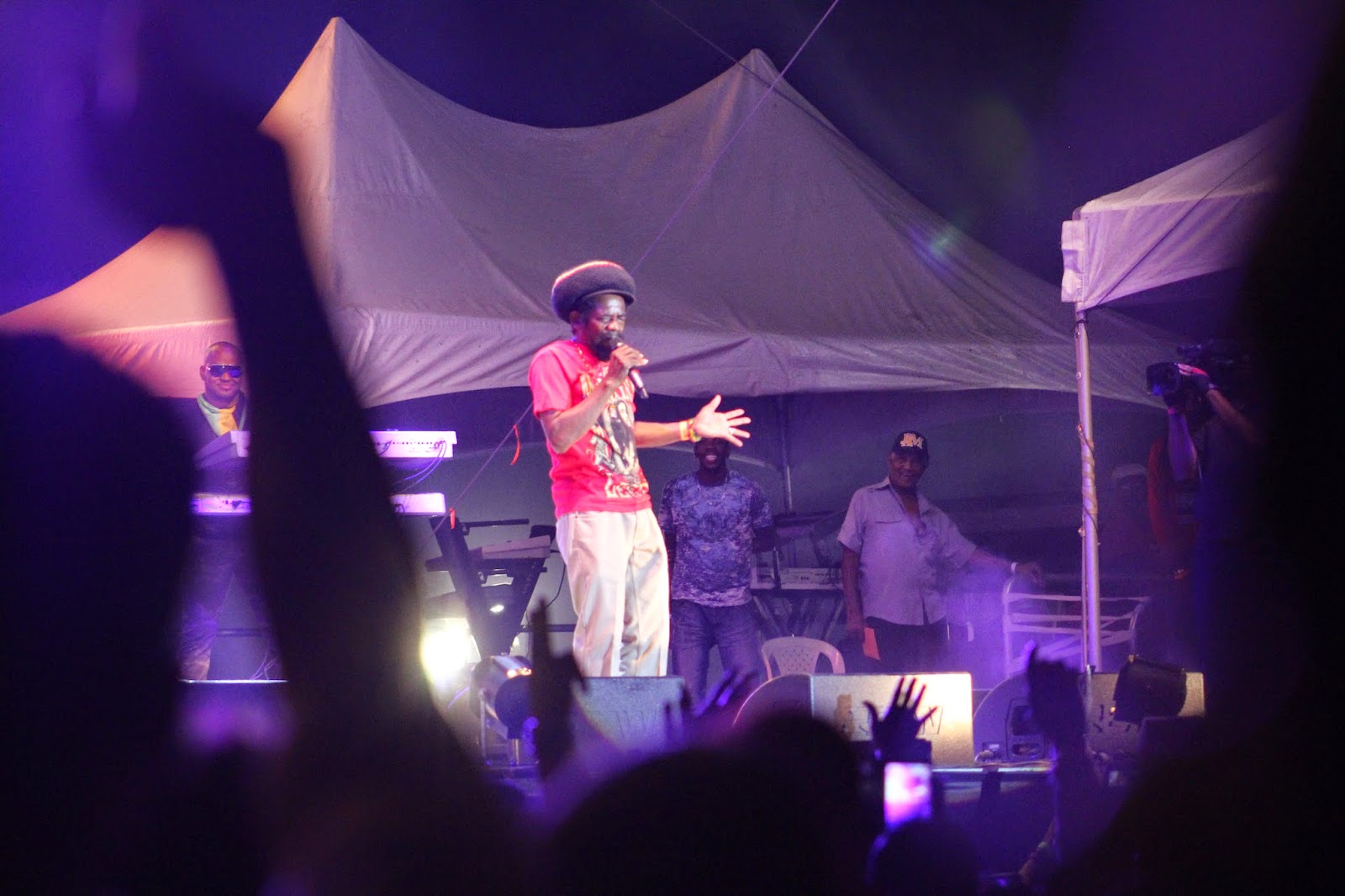 Richie Spice and Freddie McGrogor delivered as per normal. I've written about them before at Rebel Salute night 1 and night 2. First time seeing I-Octane rock a crowd. He's the quintessential Jamaican artist. Hear him and you know Jamaica. Don't know what I mean, then you don't know Jamaica. 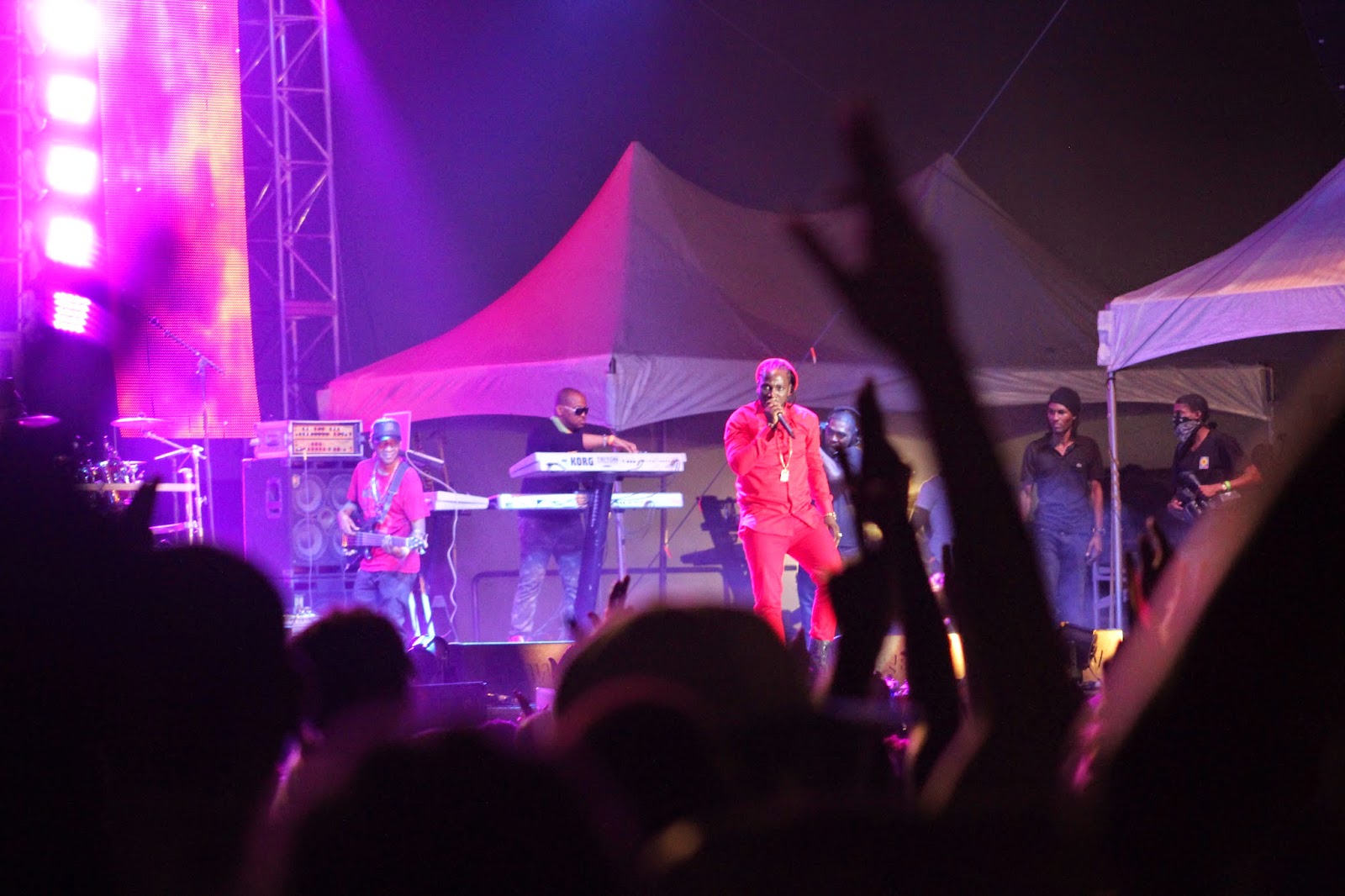 Had the crowd responding to every command, and even brought out Gaza Slim to sing "Cya Do It". She sounds pretty good live. Octane's cover = "Who The Cap Fit" aka one of Jamaica's unofficial national anthems. If I had to guess Octane's cover, it'd've been that. 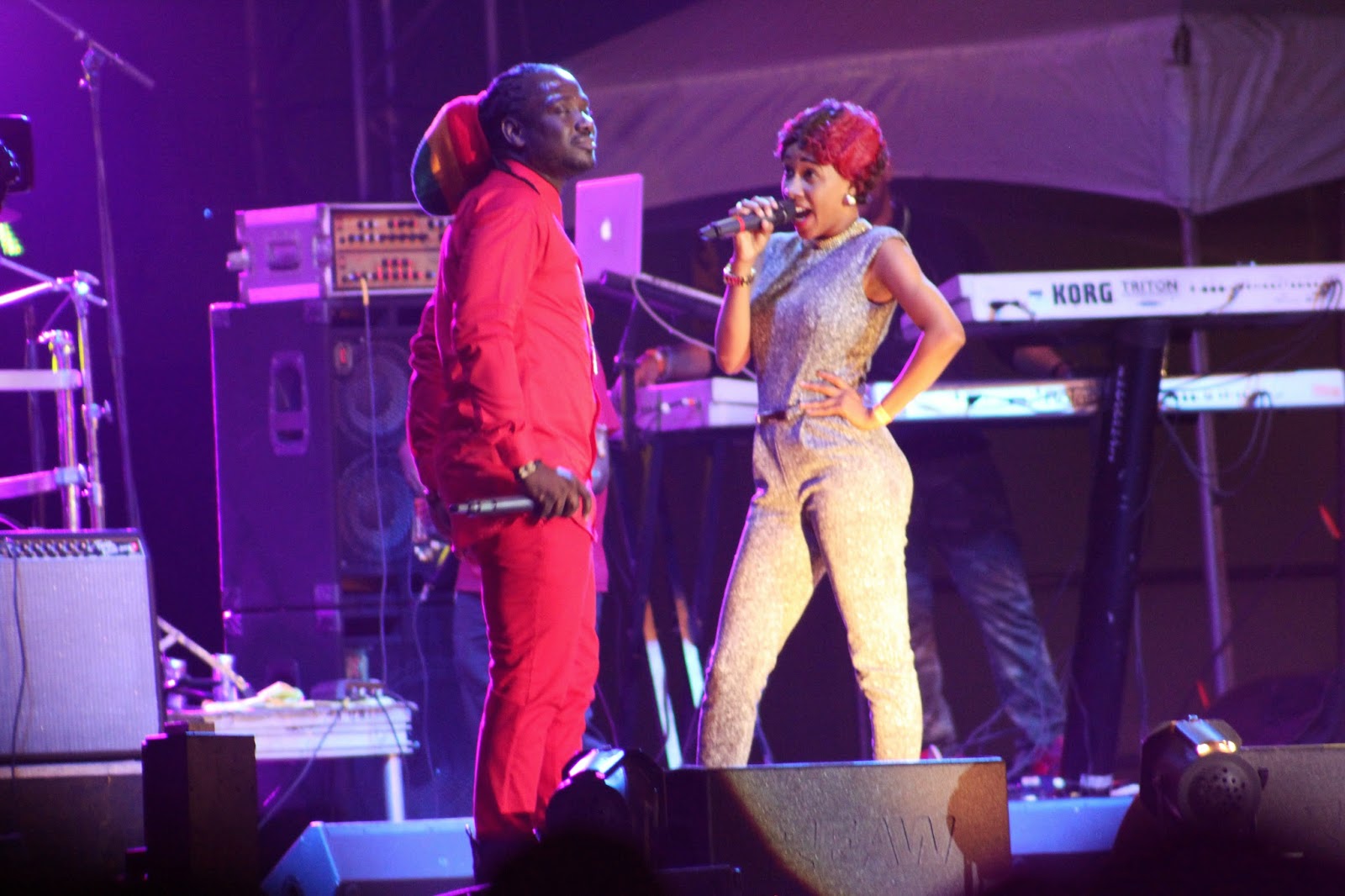 Capleton tore the place down with incredible energy - but you already knew that. His choice to sing Bob's "Three Little Birds" surprised me. Big sing along ensued obviously, but still, would've expected the Fireman to choose something less commercial. Tessanne performed a few songs, including "Redemption Song" which she performed on The Voice. Also brought out Agent Sasco to do his verse on "Everything Reminds Me of You" remix. 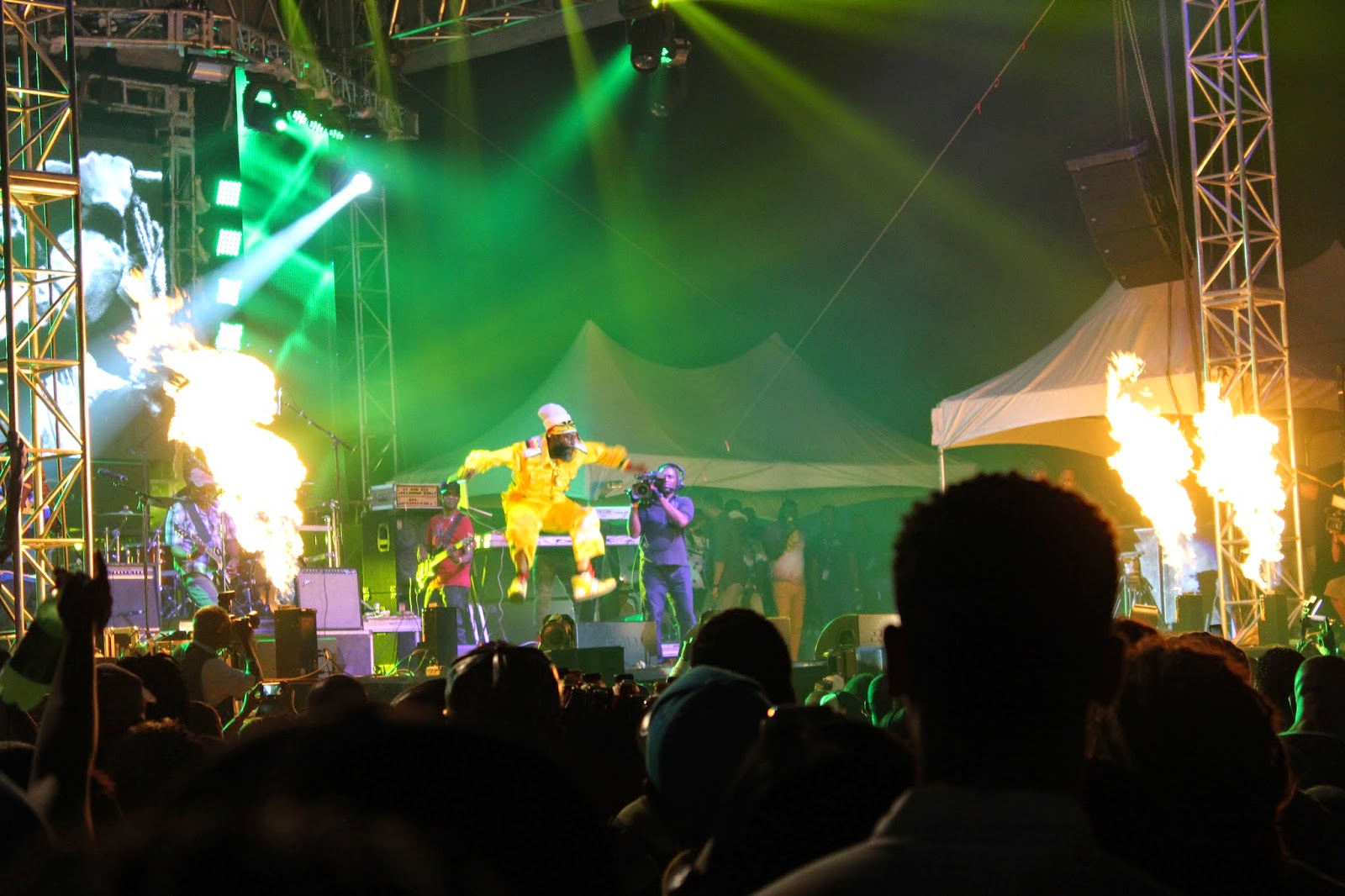 Now we get to the Sons of Marley bit. Now we know Bob has a lot of sons, some way more popular than others. Ky-Mani's the first one to appear. Couple people around me guessed it'll be him and Julian then they'll send us on our way. Decent performance, sang couple Bob songs ("Iron, Lion, Zion", "Trenchtown Rock") before being joined by Protoje to sing "Rasta Love". Julian Marley stepped up next, drew for an original song, "Boom Draw" plus cover "Burnin' and Lootin'". 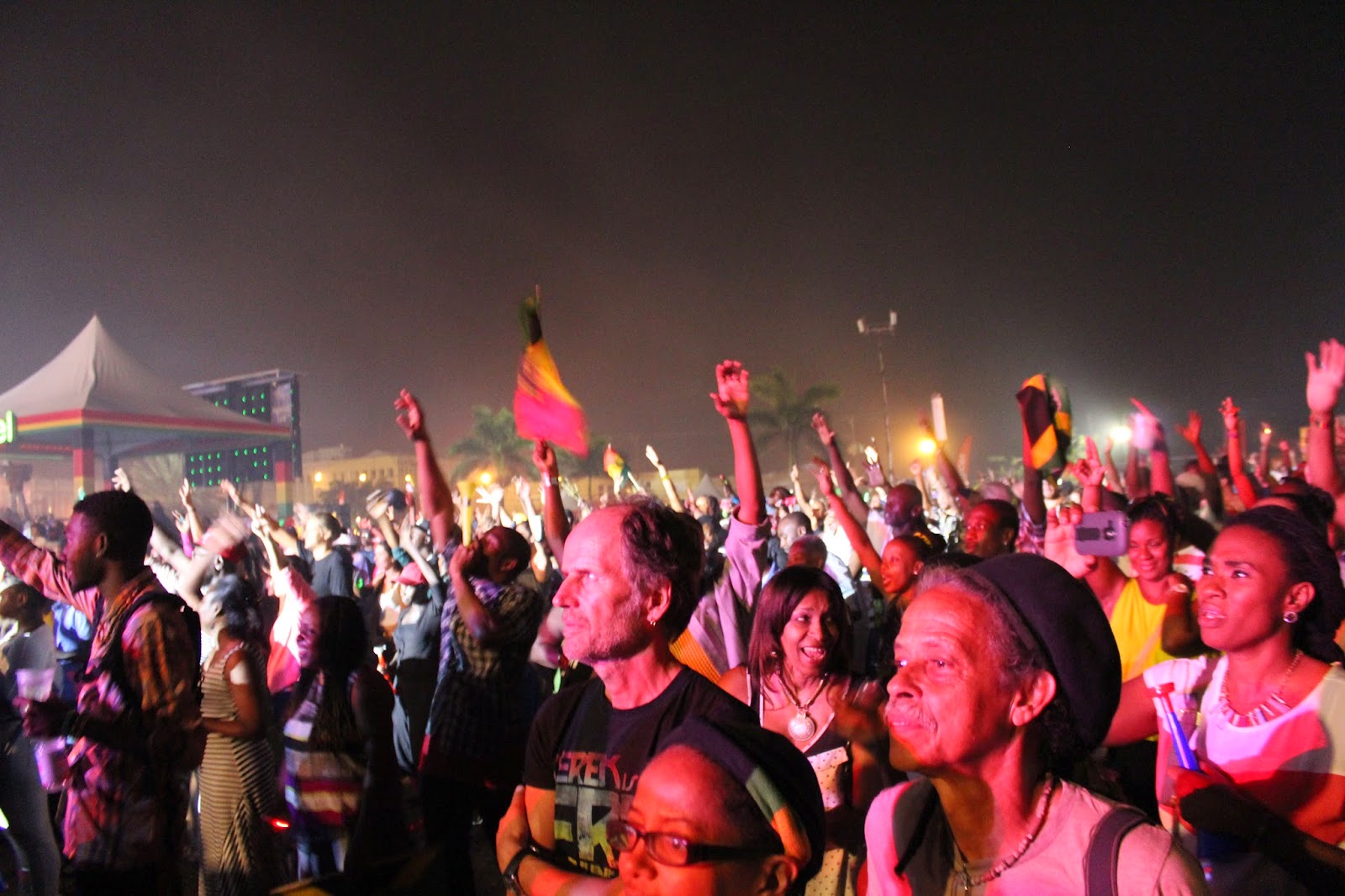 Popped to the toilet, as I locked the door I heard a familiar voice and screams. It was only the best Marley since Bob died - Damian. The way I made sure I washed my hands before I left 'cause the excitement was too much. Jr. Gong treated us to "Mek It Bun Dem", "Set Up Shop" and "Is It Worth It? (Gunman's World)", Bob covers "War / No More Trouble" topped with "Welcome To Jamrock" obviously. 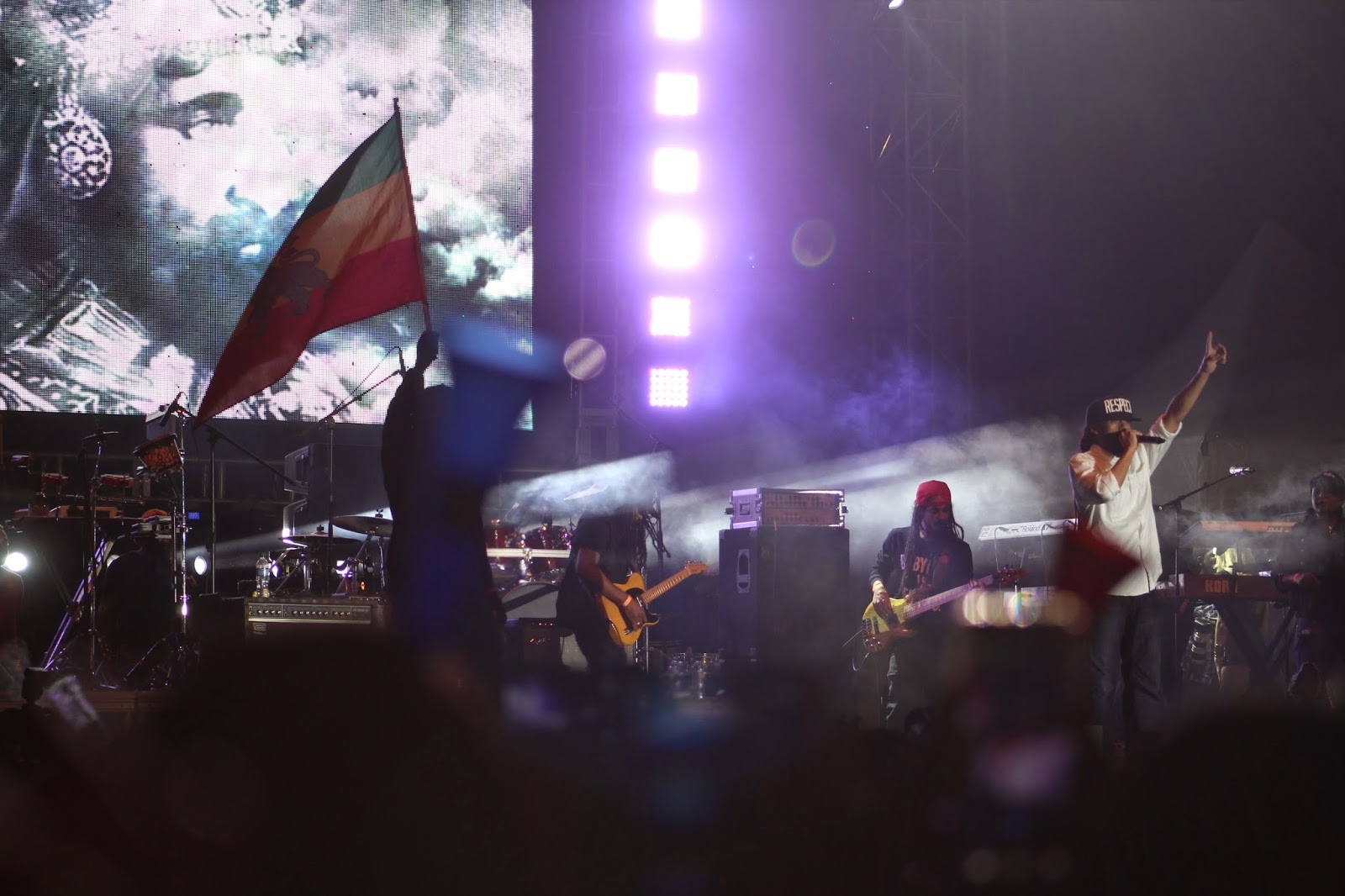 Show closed with him joined by his brothers for a rendition of "Get Up, Stand Up". All-in-all, an incredible celebration of the greatest man to make music in the history of life. To think he left the earth almost as long ago as he walked it. 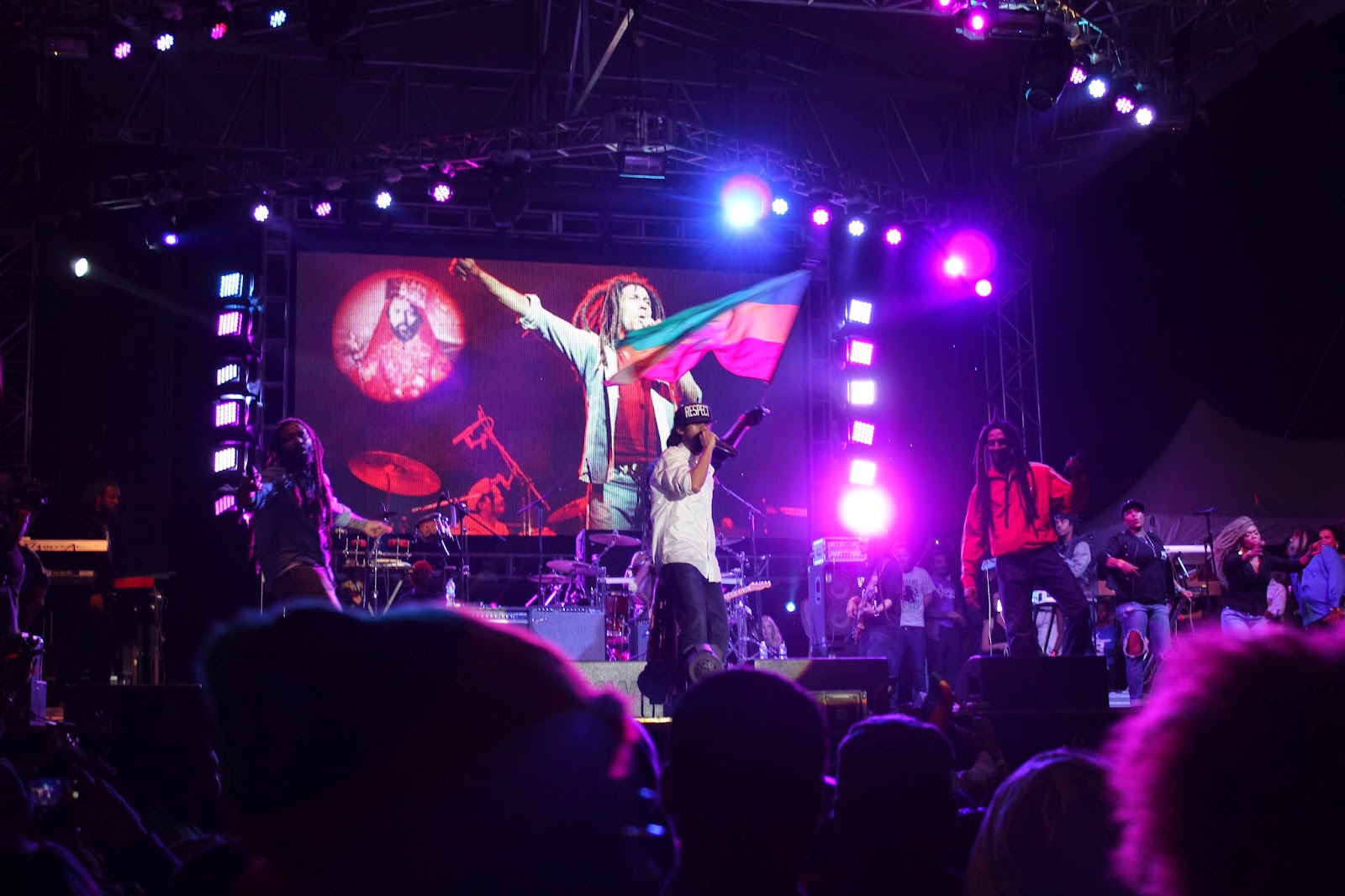