January 27, 2015
So yeah, I said I'd give you second date review in the first night review post. I realised reaching so early the previous night was a mistake, so went at 1am, fully sleeped up after a long nap. Smartest move possible. I wanted to see Exco Levi and Cali P but so it go more time.

If the first sight was about intriguing performances, second night was about the artists I'm a fan of but UK reggae promoters don't see fit to bring them over. It's better seeing them in their natural habitat anyway.

Walked in as the legendary vocal group, Mighty Diamonds were singing "Right Time". If that isn't a sign that I made the right decision in getting there late, what is? Shame I missed "I Need A Roof" but I caught "Pass The Kouchie" even with a touch of awkward deejaying from Bunny. Saw them last year at Clapham Grand without Tabby which is like seeing Dru Hill without Sisqo - it doesn't count. So basically, my first time seeing them.

Man with the rucksack, Fantan Mojah stepped up next. (Ever wondered what's in his backpack? He says its poor people problems.) You already know the big tunes were "Thanks & Praise", "Hail The King", "Nuh Build Great Man" and such. First time seeing him, an artist I've rated for a long time. 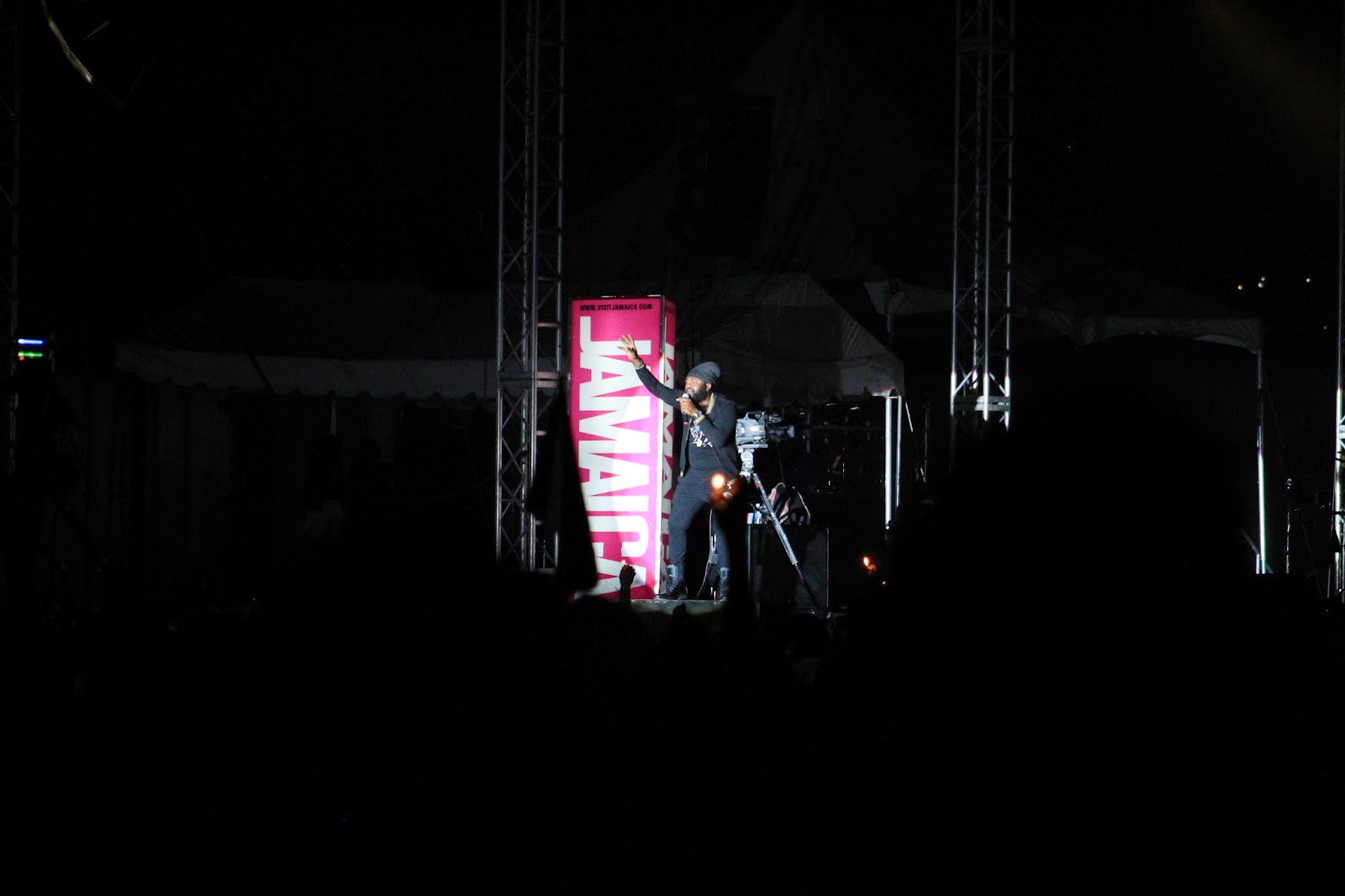 Another man I'm a big fan of but never had the pleasure of seeing live up next, Richie Spice. (He wasn't at City Splash in Camden as scheduled last year.) I've heard people say he can be a bit boring, however I didn't get that impression at all. Maybe its because he doesn't interact with the crowd and intro songs like reggae crowds are accustomed too. 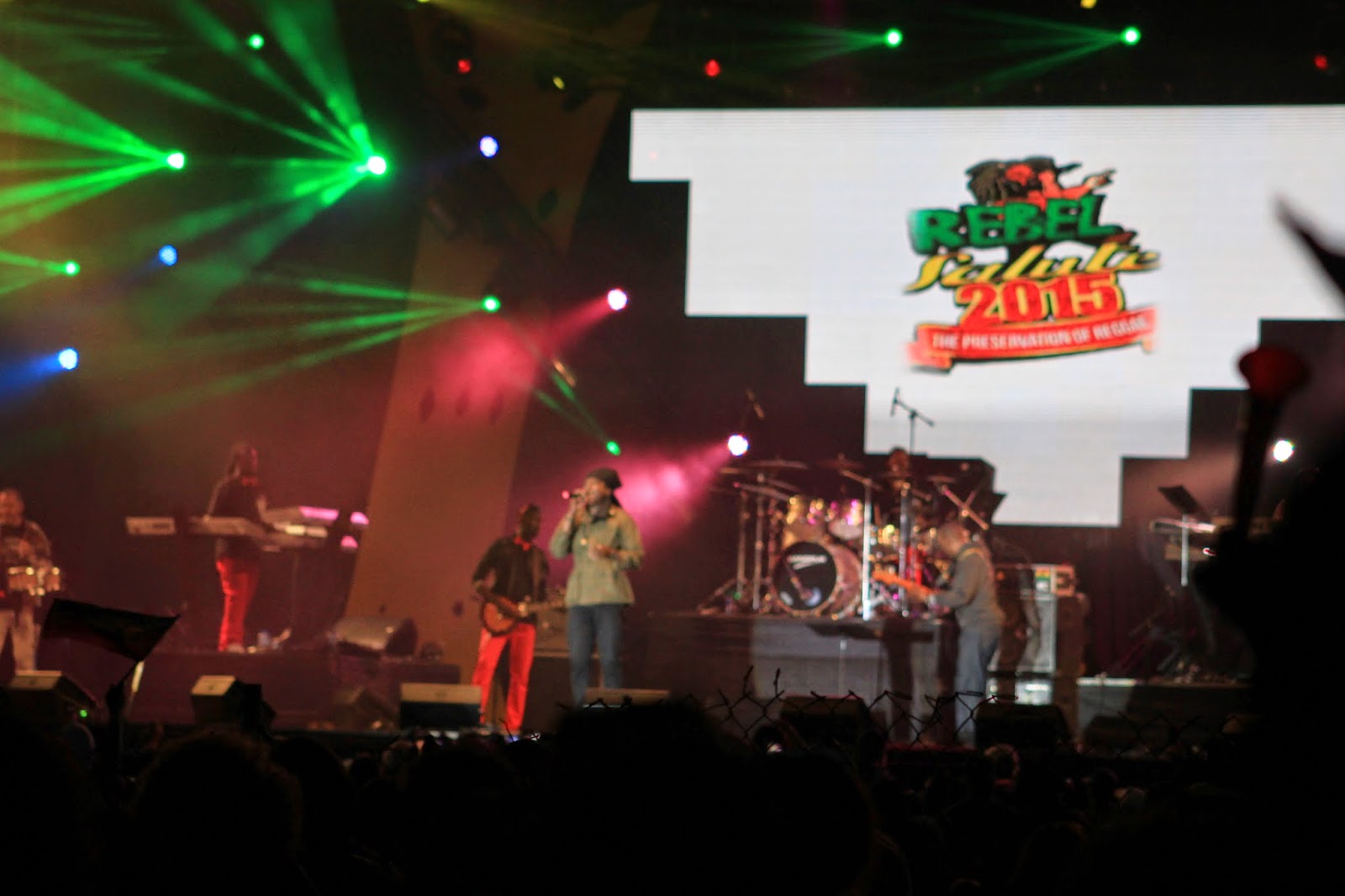 Pro-marijuana talk was big this whole weekend as Jamaican government were about to relax the laws against it. Host Mutabaruka also spoke about it. He's too funny and smart. I wanna be like him when I grow up. Great host. Had the crowd laughing even when he called us heathens because he knew we weren't going to church in the morning.

Queen Ifrica started off a bit slowly but picked up every so often with anti-bleachers "Mi Nah Rub", breakout song "Below The Waist" and fireworks during "Keep It To Yourself". Only song I was surprised didn't have a bigger response was "Tired Ah Da Supm Ya". Wicked song. Possibly on a bit longer than most wanted. 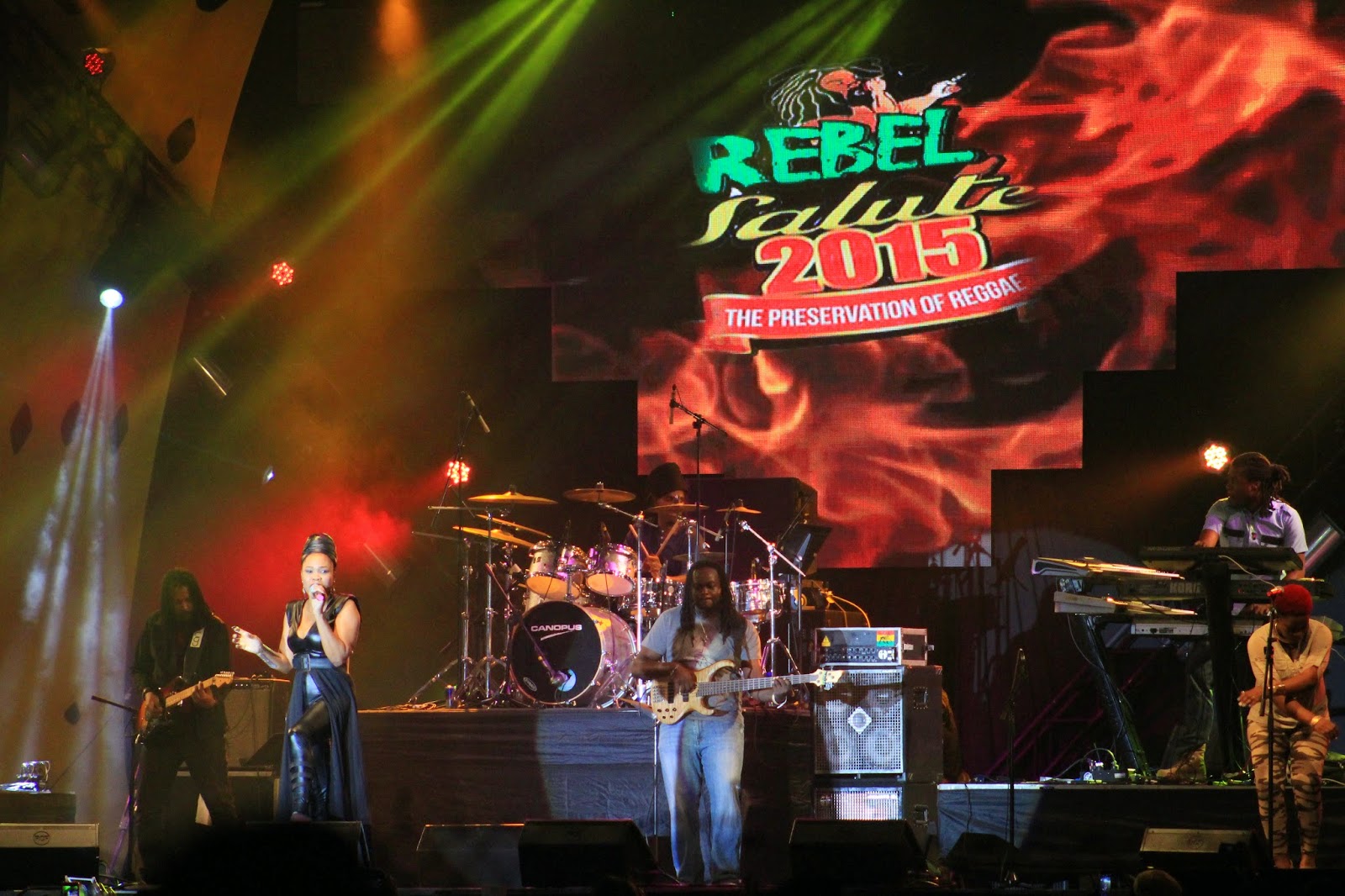 She brought out one of my favourite UK-based reggae acts, Mr Williamz who delivered a one song, "Ganja Palace". 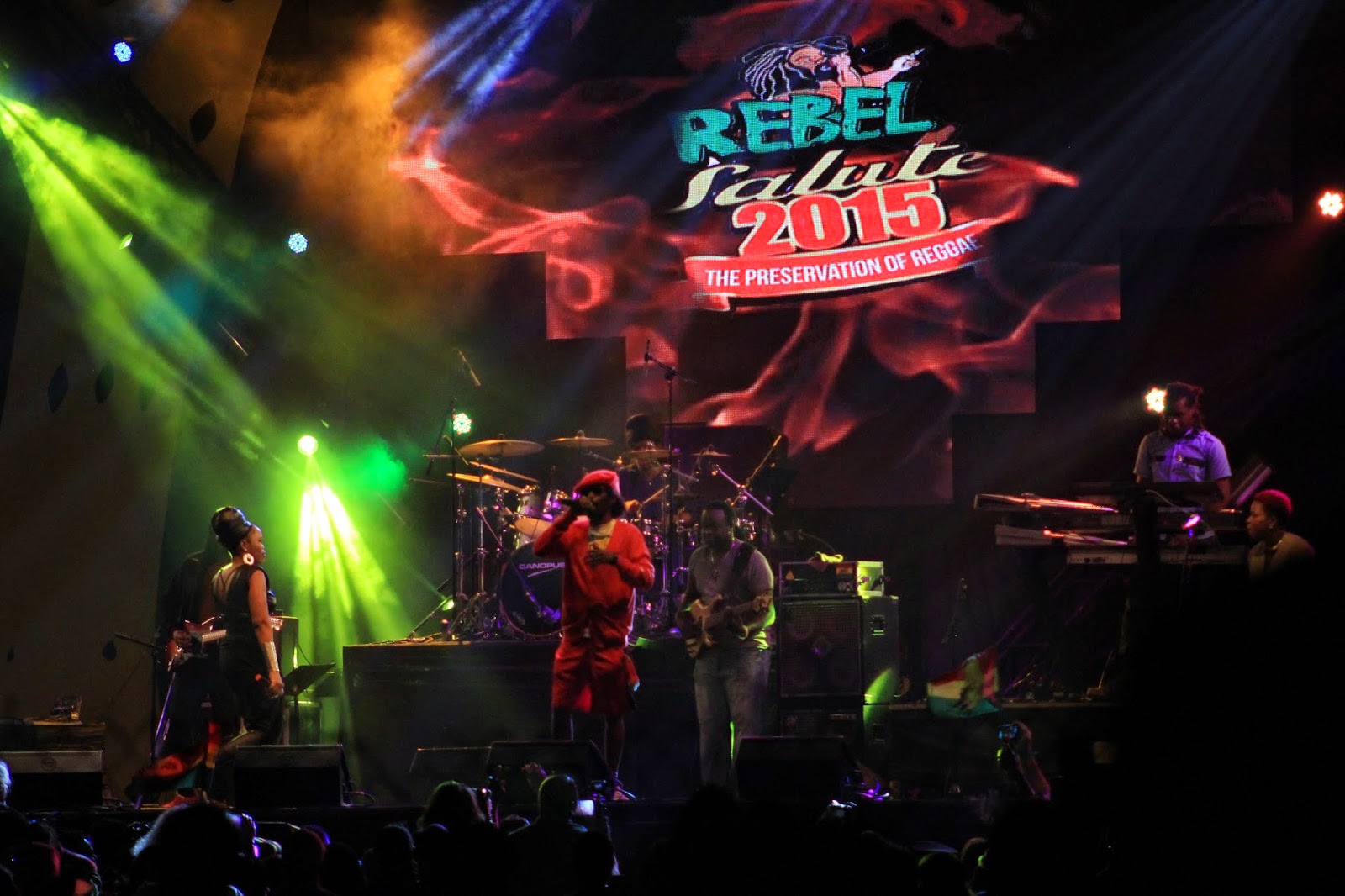 The announcement that Raging Fyah were next to perform brought cheers from the VIP section and people hitting their chairs in the people's section (don't think they knew them). "Brave" and "Far Away" were the most received songs, can't remember if they did "Nah Look Back", but they probably weren't in the best timing. Queen Ifrica was just about good enough for her slot, Raging Fyah performing a selection of patient songs after 3am probably wasn't the best time.

Now to the controversial performance of the night. If you know anything about what happened at Rebel Salute, you'll have already heard about Leroy Smart getting booed. So my first thought when he started was "His voice has joined Lauryn Hill and Mariah Carey's on a trip to never never (returning) land". (For the record, his voice was never as good as theirs, its just an example of other singers whose voices have gone. Don't miss the point.) 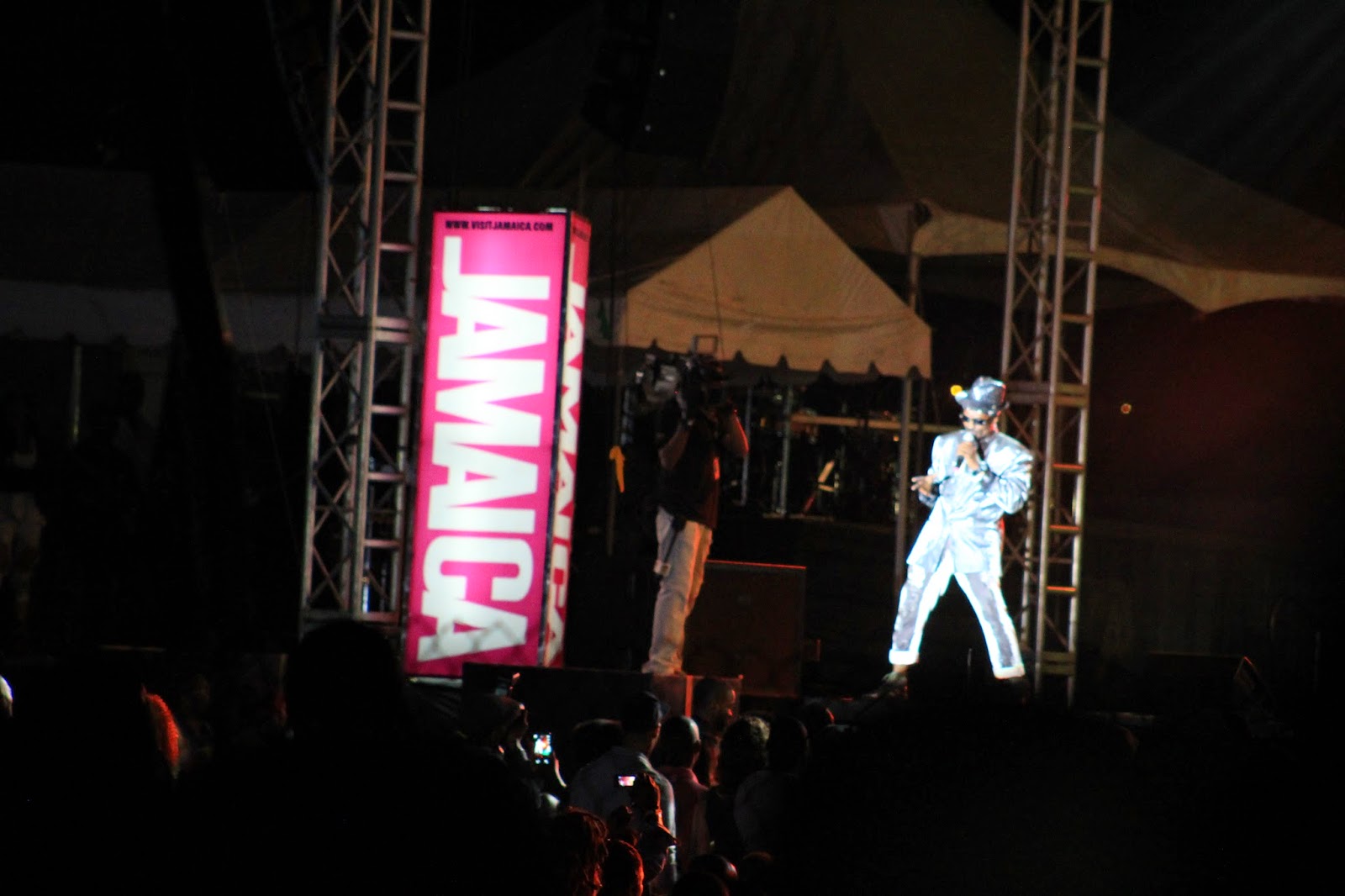 Now when he told the band off for missing out the organ melody bit in "Without Love", it was quite funny. Then he cussed the band during the next song. And the song after that. And the song following that. Not forgetting he told us he hadn't rehearsed with them. Then the drummer walked off after he informed us his songs are too big for them so he try friend up the band, 'cos obviously nothing can't run without a drummer.

Anyway, he asked for a round of applause for the band, finished his performance (probably with "Ballistic Affair") but before exiting he said "You see those seven songs there, hold them until I come back with a better band". We all oooh'd. The host was then interrupted by a returning Smart to kinda apologise for his antics, but the crowd weren't having any of it and for the first time in 22 years of the show, an artist was booed. He was entertaining though.

Freddie McGregor - not much to say. Legend and proved it. Stellar performance. Hits on hits with a voice in tip top condition where others from his era have faded. First time seeing him perform too. Really cool touch when he sang "From Mawning" chorus by his son Chino. One of my fave Chino songs. But my fave bit was "Push Comes To Shove" obviously. One of the greatest songs ever.

Inner Circle were decent. Nice to hear them sing "Sweat (La La Long)" which soundtracked the summer it came out in England, and "Bad Boys". The singer covered a couple Jacob Miller x Inner Circle songs ("Tired Fi Lick Weed In a Bush" and "Tenement Yard") that I don't think he had the voice to do. Not sure on his name but he has a nice lovers/cabaret voice not really Jacob Miller. Chronixx came out though, and got the biggest reaction of any reggae artist to emerge within the last ten years. Horns were blowing like crazy throughout the whole performance. Unbelievable! He definitely has the people on his side. Performed "News Carrying Dread (Tenement Yard)"

Luciano was solid. Sometimes in his own zone, but overall the songs were fit for the moment. Righteous and uplifting. Think "Sweep Over My Soul", "Ulterior Motive" and "Your World and Mine" on a Sunday morning as the suns rising. Bliss mate, bliss. A little tribute to Garnet Silk too. Oh, and in Jamaica. Hilarious moment when the sole of his boot broke, forcing him to change the left one. Went barefoot momentarily saying "You see what I mean about vanity?" before saluting Mutabaruka on the barefoot flex. Tek bad ting mek joke. 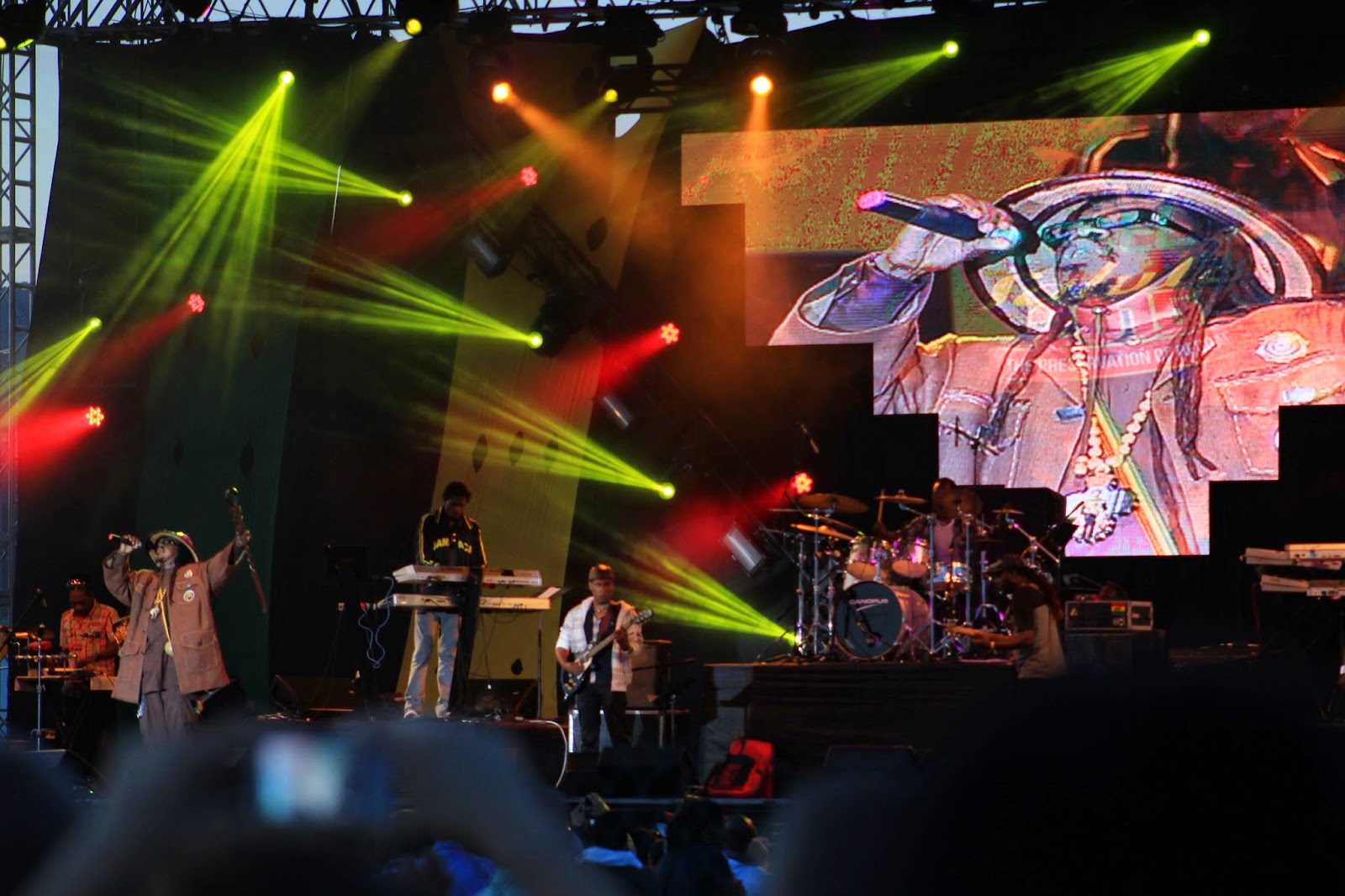 Daylight now and two men left. Penultimate performance handled by sweet Cocoa Tea. Cocoa Tea is a man who you see on the line-up and don't really clock the catalogue until you witness the catalogue. When I say he shell down the place. Real entertainer. Voice, songs and interaction. Had the crowd bawling for more. Resounding no when asked if he should leave. Only artist to do an encore. True professional performance. 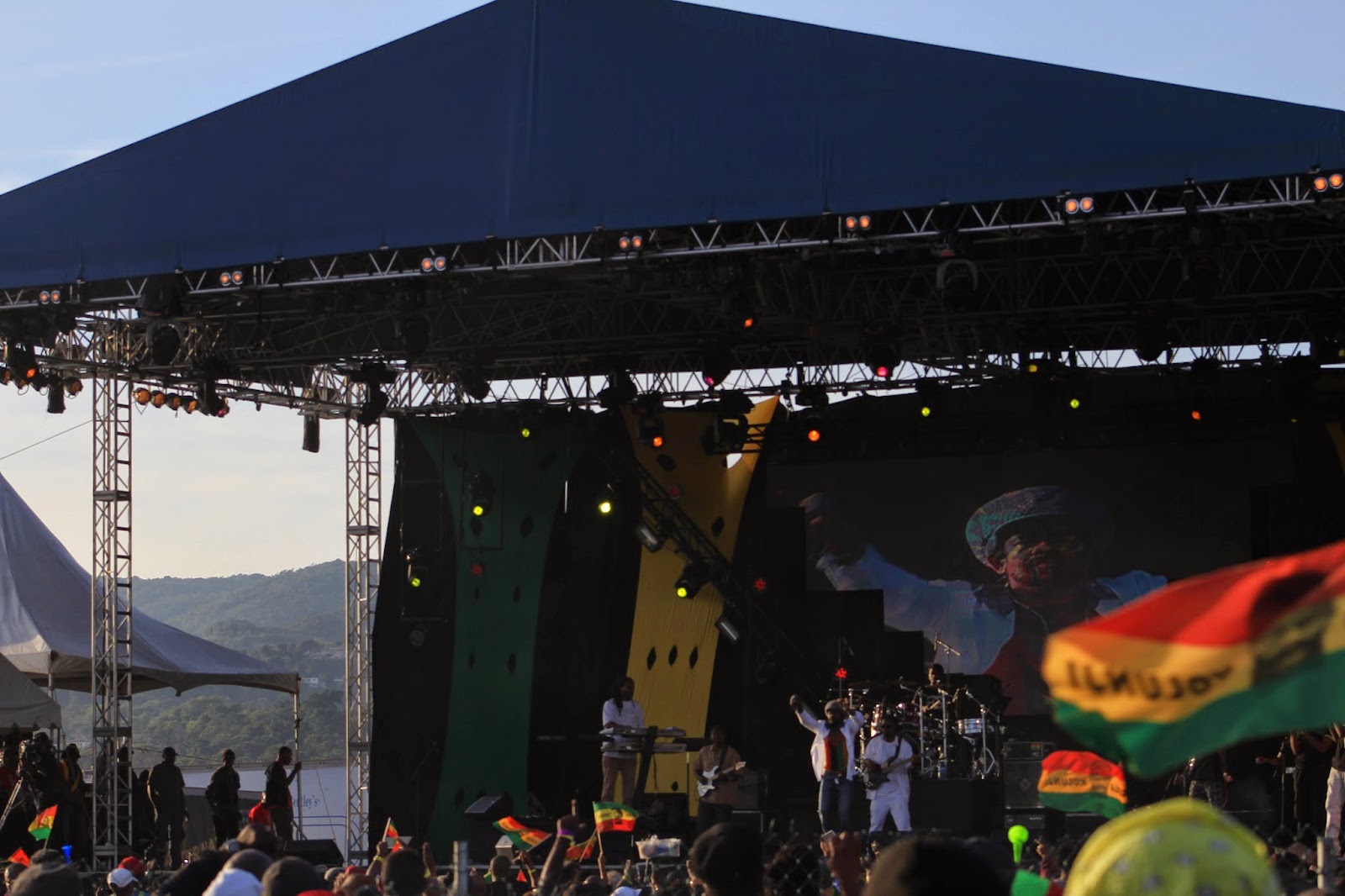 Entered with some Bob Marley covers (Rastaman Chant, The Heathen and couple others) before hitting with his lovers dancehall classics like "I've Lost My Sonia", "Good Life", "Come Again" and "She Loves Me Now" with a Beres cover in fashion as a reply. (Beres was backstage.) Rastaman chant again with "Hurry Up and Come". I think the encore was "Young Lover". And they say Rasta, lovers and dancehall doesn't shell down a righteous Rastafari place. Best performance of the entire two days for me.

Show closer time now. Suns beating down now. Sizzla stepped out and made the place a lot hotter. A LOT HOTTER! Burnt down the place and set a blaze on everything moving - including the promotor for not letting his crew in easily enough. Pure hits. Hit on top of hits on top of hits. So much hits he probably tried to get through too many so didn't really sink into them. Only my second time seeing him. Loved hearing "Just One of Those Days", "Praise Ye Jah", "Solid as a Rock", "Holding Firm" (my fave) and them signature hits but ones like "Taking Over" and "Guide Over Us" were unexpected. Once again, people were burning old bits and bobs. 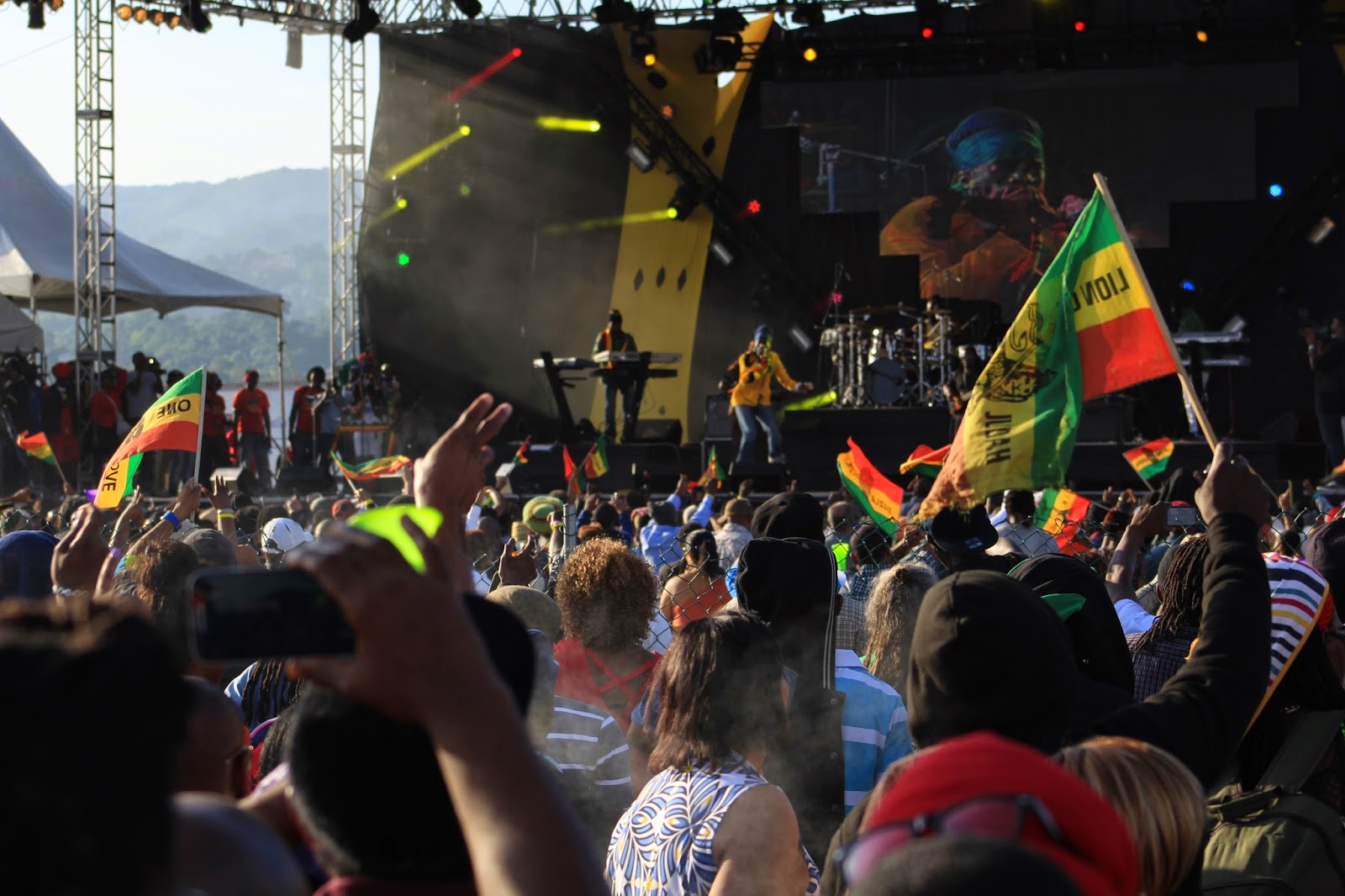 Overall thoughts on the whole two-day festival? One of the best things you could ever go to. I recommend it even if you aren't the biggest reggae fan but you love culture. Reggae is all about the people, so seeing it performed directly to and received by the people it's meant for is a beautiful thing. And Jamaicans are expressive people so you know when they love something.

Despite the late finishes, its well organised. The late thing is just how all Jamaican shows work. Morning performances are a thing of legends. If you can hold people until and entertain them in the morning, you are a legend. It's as simple as that. To see all of those acts for just over £17 is something you'd have to be a knob to complain about. There were many you couldn't see for less than £20 on the line up.