That time I experienced a Protoje/reggae show in France

December 16, 2014
As much as I'd love to tell you all the stories and things I witnessed on my travels to a reggae show in Europe (except UK obviously) for the first time, please remember I have a biography to sell in a few decades. I hope you understand my rights to withhold certain aspects of my life until then. If not, tough innit. You won't know now.

So anyway, went to Boulogne for the first time in my life apart from those times I got dragged along on coach trips to stock up the alcohol in time for Christmas. And I'd like to add, none of the alcohol was bought for or by me nor consumed by me. My sole purpose was extra hand to carry bags. Some might call this child slavery, I just know it as "You ah di bwoy, ih!" as another carrier bag is shoved into my hands. Bearing in mind, I'm short and slight, I'm definitely not a contender for "People you can depend on when you need bag carriers" lists.

But we digress. So yeah, Boulogne. I don't recall meeting anybody that spoke English for starters - apart from security in the venue (not even the guest list person) - so for someone who learnt Spanish and says "gracias" before correcting himself to say "merci", this was a slight issue. Like, when asking for directions to the venue! Found it eventually, after walking around for about 45 mins. These times, it was about a 10mins walk from the train station. 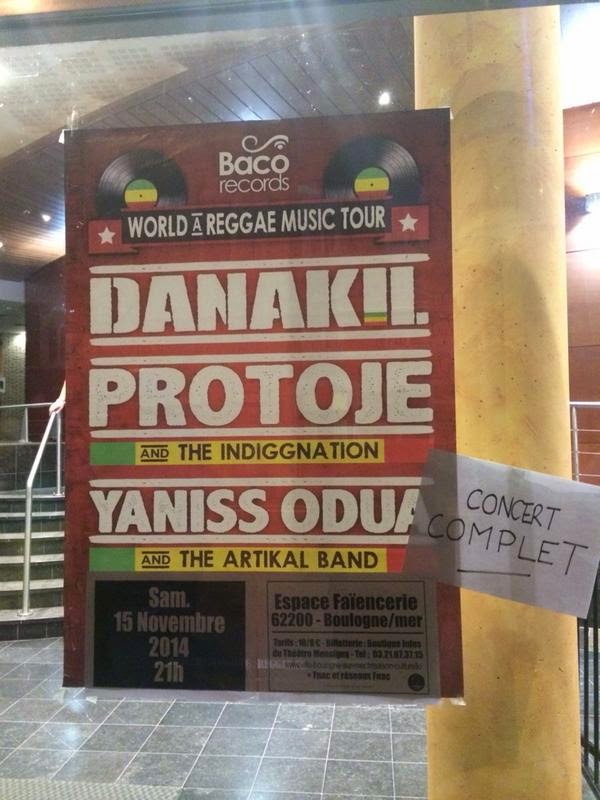 So the sold-out show featured Protoje sandwiched between two French-speaking acts, Yaniss Odua - who's from Martinique (and everything else you can make out on this French wikipedia page) - and Parisian band, Danakil, who closed the show. It was proper interesting because I couldn't understand the artists either side, so it mainly the feeling of the songs, style of riddims and crowd reaction. I'm sure there were people in the building who didn't understand Protoje, so we were all together as one on that.

If I had to guess, I'd say the crowd was predominantly college to university ages (16-21 years old) at the front with the elders (say 24+) mid to back of the venue. Walked in during Yaniss Odua performance and had my view slightly blocked by the amount of waving flags. Red, gold and green, naturally. Not sure where they got them from (artist or brought along with them), but wave them they did. Place was going mental! Whole heap of jumping and waving. Was like a soca rave, minus the water, scantily glad women pelting waist and soca music. So it wasn't like a soca rave, it was just people jumping and "ah get orn baad" - that's the only similarity.

Big up the drunk guy in a Jamaica World Cup '98 football kit(!!! (the way I was hating)) asked me if I'm feeling the vibes. Told him yeah then he introduced me to his girlfriend. I know ménage à trois is a French word but that wasn't an invite, was it? Surely it's more formal than that. Like, doesn't she have to buy me a pint and peanuts? I would've declined anyway so minor.

Weirdest thing I've seen in my life happened next. As I mentioned before, I walked in during Yaniss' set, so when he finished, about three quarters of the venue leave the building. I was so confused. "Did the whole thing just miss me? I'm pretty sure the poster said the show starts at 10pm, it's something to 11pm... Did I misunderstand?"

This song below is one I remember getting a big reaction.

Anyway, some other fella came up to me asking "Ah zo you like zeh reggae music?" Nah boss man, I''m waiting for the jazz. Asked him who he'd come to see, he replied "No one [in particular], I'm just here for the music." Big up yourself, cos you wore a Jamaica top too. In fact, there were loads of people sporting various red, gold and green tops, Jamaica and tour merch which was sold at the back of the venue. Hold tight the French crew dem.

I walked outside to see where everybody went. Security guard (the guy who spoke English) told me they've gone out to smoke. When I say the pavement was packed! Never seen anything like it in my life. And it wasn't even the ganja. Pure tobacco dem did ah deal wid.

Back to the show, Protoje up next. This was the first time I'd ever seen him do a full set even though I've been a fan since 2011/12 (you may remember I told Guardian readers he's one to listen to). The Indiggnation band set up running some instrumental versions in a dub style and fashion. Protoje kicked off with "I&I" and "Rub-a-Dub Soldier" from second album, The 8 Year Affair. These times now I smell the sweet aroma of the plant found on King Solomon's grave aka high grade aka 'erb aka di collie aka marijuana.

He hit through the big songs them, including (but not restricted to) "Dread", "Who Dem A Program" (when my don in the Jamaica '98 top started vibing on stage with Proto lol), "Not A Marijuana Song", reggae song of the year "Who Knows", follow-up "Stylin'" (with demonstration of vocoder by keyboardist), "Resist Not Evil" (where he slowed the chorus down for those who couldn't understand English), unreleased Ancient Future cut "Criminal", and a personal favourite "Hail Rastafari" - that song takes me into a different dimension.

One thing I noted is his vocal clarity is tops. You hear most words. In addition to the forward he received for his verses on "JA", there were big reactions for his guitarist playing the guitar behind his back in full Jimi Hendrix style and his backing singers deejaying the second verse on "Who Dem A Program".

Most popular songs (judging by crowd reaction when they started) were "Rasta Love" where they sang-a-long to the chorus without prompt and "Kingston Be Wise".

Danakil came on, didn't really understand anything they said but felt the energy and vibes. The crowd was really into it and that's all that matters. Only bit I understood was the "Redemption Song" cover - second time I'd seen it that week (The Wailers at indigo at the 02 being the first). Good melodies and positive vibes inside.

Keep up to date with Protoje, get your merchandise and etc. here

Also, make sure you're here: