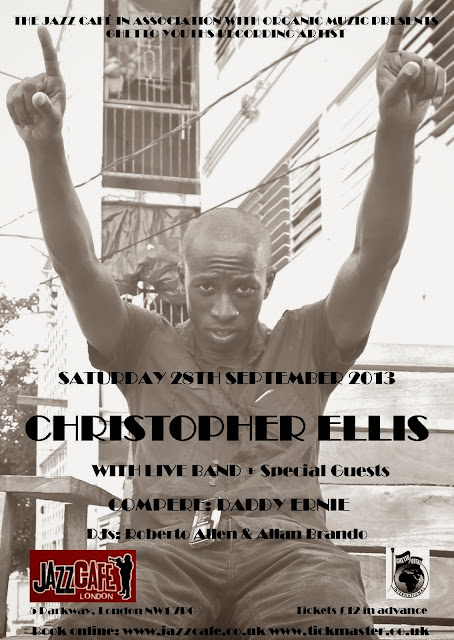 Marvin Sparks caught up with south Londoner, Christopher Ellis (@EllisMuzicChild), in a west London hotel lobby to talk challenges making a name as a singer in his own right, choosing authentic reggae despite its lack of pop chart presence in UK, disappointing reaction to last single and learning from the other Ghetto Youths members.

Marvin Sparks: Was music something you always wanted to do?

Christopher Ellis: I always imagined myself as a singer from ever since I could remember. I used to tell my school teachers that I don't have to do the work because I'm going to be a singer [laughs]. I was always a clever boy in class, but I didn't like doing the work.

MS: A lot of times singing parents don't want their children to follow their footsteps into a musical career as they know how hard it can be.

MS: Feel any pressure with the name?

CE: No. That's a very popular question, but no, I don't feel the pressure because I don't have to do this, I choose to do this - even though I say the business chose me. There's no pressure, really. I feel like I'll be okay if I be myself.

MS: I guess it's a popular question because people often unfairly compare children with their parents and the child will never be as good as the parent to some people.

CE: You have to remember, it's not about ability, the guy who came first will always get the glory. It's the root. There are players who probably have the ability of or better than Pele, but they will never get the title of being better than Pele because Pele was the first. You aren't going to beat that. I don't really think 'My dad did this so I've got to'. Just have to be me and be great and it'll work.

MS: I think it was brave of you to cover your father's songs so early in your career which some people would rather steer clear from.

CE: I wanted to and Stephen Marley said 'No, let's do it.' We did "Willow Tree" and it came out good. Even "End of Time", I used one line from that song. From there we moved on to songs like "English" and other songs that I wrote so it's all good. It's a challenge to find the balance to do those things because you can overdo it. Covering too many songs, to me anyway, is a bit karaoke-ish. Come out as an artist, people love originality.

MS: And as a British artist, not many black artists venture into making reggae. What made you stay true to reggae?

CE: It chose me and I like the sound. I love the sound. And my father is a great influence on me as well, so that pushed me into an area where I'm exposed to this and then the love grows for it.

MS: I think a lot of artists in the UK like reggae, but they don't pursuit it because it isn't in the pop charts so they don't really see a possibility of making a living from it. Didn't that thought cross your mind?

MS: Speaking of attempting popular sounding songs, you did make "Don't Change Your Number" with Bay-C from Ward 21.

CE: Yeah, and even that came organically. We just went in the studio mucking about, a keyboard man was playing something and I started singing [melody of chorus]. It just came like that - it wasn't planned. He was just doing that [imitates piano from single], it's a doo-wop kind've sound and that's how we got the song.

MS: What did you think of the reaction when that came out?

CE: It wasn't too... The reggae crowd didn't warm to it to be honest with you. I understand, because of the sound, but it's on MTV Base now so that's doing something in that crowd which is always great. I have a new song named "Better Than Love" which is playing hard around the place. Damian Marley produced that one and it's getting a lot of love. That's our world now, the real rock[steady]. Soul meets rock[steady].

MS: Is that your lane then, soul and reggae?

CE: My lane is the songs you're hearing, "Don't Change Your Number", "English", "End of Time","Better Than Love"... It's not down to a certain sound like 'Oh, he sings rocksteady', you just hear songs from me and I hope the people like them.

MS: How did you get with the Ghetto Youths camp?

CE: My father passed away when I was in Jamaica. A man said to me 'Stephen Marley should be the man to produce you', then drove me to Stephen's house where Bob used to live.  We spoke, then the next day we made "End of Time". 24 hours after I met the man. What a great story.

MS: What have you learnt from being around those guys?

MS: And I guess you get to see the power of reggae as you travel around to various continents on tour with them. You can see it's a worldwide thing, which many in England don't.

CE: Yeah, you can see it. [Mainland] Europe takes the thing very seriously. America, but Europe the thing is really there. England has a big reggae scene too. It's going really well, man.

MS: You're back headlining at the Jazz Café on Saturday 28th September.

CE: You can get your tickets from Jazz Café website or Ticketmaster.

CE: Yeah, that was a year ago. The last one sold out and we're looking for the same sort of turnout this time. We want to see people come out. And like I say, I don't want people to come out to support me, I want you to come out because you like the music.

If you missed last year's show, check out this video: