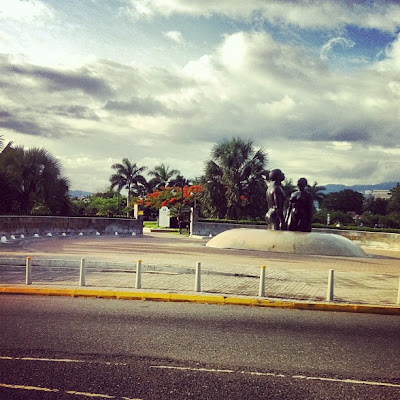 Today is emancipation day in Jamaica. I am a British-Jamaican man that acknowledges wah gwaan on both sides of myself. One without the other wouldn't make me who I am today. Judgement by outsiders can't make me feel ashamed of my heritage nor does misbehaviour by minorities with whom I share my heritage. At the end of the day, I'm still who I am. And proud.

Above is a picture I took of Emancipation Park last summer. Today's post is filled with tweets I've seen over the past couple of days that I felt were appropriate for today.

According to Wiki: "Emancipation Day is celebrated in many former British colonies in the Caribbean and areas of the United States on various dates in observance of the emancipation of slaves of African origin. It is also observed in other areas in regard to the abolition of serfdom or other forms of servitude."

@Afrotonomy "Some of the greatest & most progressive Black/African people where born on this Island called Jamaica. Marcus Garvey is without a doubt one of my heroes. A strong & passionate man who wanted to uplift the state of black people, from Ja to Asia. When people cuss Jamaicans I think 'Do you know what Jamaican people have done for the progression of Black/African people in history?' Some of the most influencial Pan-African people who influenced people like X, King, Assata etc were. Jamaican. That little Island has a history that is rich in language, culture, people & has birthed incredible human beings who have influenced us."

AkalaMusic "[in reply to] @Afrotonomy That's precisely why ppl r taught to cuss us. Same with the Haitians in fact even worse with them."

@Lelaslounge "#Jamaica Fact - due to the rebellious nature of the Maroons. The British deported thousands of them to Novo Scotia and Sierra Leone in 1796.

#Jamaica Fact - 91% of The Sierra Leone Creoles are descendants of Jamaican maroons who were deported to Freetown by the British in 1841.

#Jamaica Fact - Sierra Leone Creoles and Jamaicans are the closest connected people of African descent in the diaspora and the continent.

#Jamaica Fact. Marcus Mosiah Garvey - the father of the Back to Africa Movement and UNIA group was born and raised on the Island in 1887

#Jamaica Fact - The rastafari spiritual system was the first of its time to see people of African descent choose their own religious belief.

#Jamaica Fact - During Ethiopia's struggle against Italian occupation. Thousands of Jamaican's signed up to go and fight for Ethiopia.

#JA fact - The maroons intermarried with the Arawak and Taino natives on the Island which formed the "coolie" population of Jamaica.

#Jamaica Fact - The Jamaican Maroons were the most rebellious Africans during slavery - second to the Haitians.

Well this is the history lesson for today :D I will be back later on with some more extensive ones on the roots of Jamaica's culture. :D I am just trying to post some inspiring facts about Jamaica.There is a rich history there that if often hidden or compromised with lies. Anyway, where was I. Ahh yes I had entered the 20th century...

As the great father Bob Marley sang the words of the immensely inspiration forward thinking Marcus Mosiah Garvey "Emancipate yourself from mental slavery. None but ourselves can free our mind"