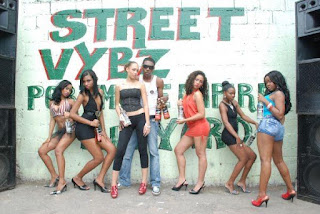 If you know how much I love dancehall, you can kinda guess how excited I was to do this and bring it to you. If you know how respected your work and avenue have to be + small amount of interviews Kartel (that's the abbreviation, not Vybz) does, you'll understand how special this interview is. I think this is his first ever UK interview (outside of DJ's Robbo Ranx and possibly Young Lion at 1Xtra). His PR said it's the first too, but I couldn't prove beyond reasonable doubt that the now defunct New Nation didn't interview him. Anyone else that did one didn't register on Google. Soz xxx. (So yeah, if you wanna cover dancehall and reggae interviews, holla at me for the BEST/unreachable reggae and dancehall artists: marvin.sparks220@gmail.com)

Vybz Kartel has been one of my favourite deejay's long before the Gully-Gaza feud. From he was shouting "Up to di time" or when he adopted the badman Kartel persona on track with "Up to di crime". Them tunes there did maddddddddddd! "Portmore have di askella/ Weh make big man scream like Angela/ Police can't lock me up like Mandela/ You mad?! Head we open like umbrella" or "Mi nuh care weh you bad from/ Or di ends where you trod from/ Gunshot make fall like the bridge over London!"

At times I wondered whether this would ever take place. Was supposed to interview him whilst I was in Jamaica this summer. He got locked up. Then two weeks ago, but he had a family matter. This story is similar to another reggae artist; first time his house got burnt down, second he got locked up. Still praying for that day.

Before you get the link, I'mma take you on a little journey with a slightly personal blog which I don't ever do, but 'cos it's year end and I'm actually proud of myself here goes...

This time last year (well until about May this year) I didn't have anywhere to post interviews apart from this very blog. I didn't do stuff for PyroRadio.com anymore because of changes going on there, nor did I write for the magazine I used to. Why? A few reasons. Is it professional to go into them here? Probably not. Could be here all day. But I will say this: treating people with respect goes very far unlike a par + "Me run tings, tings nuh run me". If you know which one that is, you know, if not, I ain't gonna say. Big up Matt Power from PyroRadio all day though. Don innadis! I'll always say that. He's now doing very well over at FlicksandBits.com.

I've always known I am the man for reggae and dancehall interviews in the UK, others didn't. I know this from feedback I have received from those in and out of the dancehall genre + I don't see anyone else cover it as hard as I do. Plenty dancehall followers on Twitter now so it's reaching the people. I can't say journalism because man like Gabriel Heatwave is a badman (when he gets time to blog and isn't travelling around the world DJing)! Same for Dan and Benjamin. Check out Heatwave site to see what they do. There may be others, but I can't think of them right now or I haven't(/don't) read their isht.

Anyway, I remember last summer getting air on the Serani interview, because quite frankly, the people there didn't rate me or the avenues. I also remember wanting to interview Sean Paul around the same time. Never got that due to miscommunication, then SP didn't return when he was scheduled to over carnival weekend. Now you can kinda imagine my disappointment seeing others who I know don't share my passion for dancehall and reggae get those interviews.

But you know what, I thought I'm good enough, let me push on.

Year goes by and I've had the pleasure of interviewing three of my favourite producers including Serani. The man from that Clarks song Popcaan's first interview with a UK journalist which exploded all over the interwebs and re-posted on 14 different dancehall sites last time I Google'd. First with Alliance member Wayne Marshall who had a big song this year posted on Drake's site and featured Estelle on the remix. Interviewed the man with the biggest song of the year, Gyptian. UKs leading reggae artist Gappy Ranks interview included on his press release. Got another one that got posted on quite a few sites with Busy Signal.

Outside of reggae and dancehall, I interviewed two of my top 5 "More I'd like to hear more from' in 2010, one of my fave grime artist's Devlin and my favourite rapper J. Cole (I think that will drop in 2011), released my first video interview with Akala, there's a second one somewhere not online yet though. Also, an exclusive interview with SAS. Oh yeah, also got a front cover feature too with Davinche and Cleo Sol for Flavour magazine. I've done a few others as well, but you'll see them in due course.

Haven't got the Sean Paul yet but he follows me on Twitter so you never know.

Shout out the good people at VP, Joseph Patterson and Annika Allen for this year. Ya large. Also 'ang tight my Bloggers Delight familia. Last night's live session was big!

So yeah, it has been a productive one. If you feel like people aren't rating you, hold the faith, push harder and you'll get there. Trust me.

Disclaimer: This doesn't work for everyone. You have to be good. Obviously

Anyway, here is the first part of 2/few/twice ("we nah test two") for MTV Wrap Up. But like Clarks, there has to be a trilogy, doah? Oh! Awoe!!!

In his first full-length interview with a UK journalist in over 5 years, Vybz Kartel speaks to The Wrap Up’s Marvin Sparks about his beginnings, writing for Bounty Killer, the infectious tribute to footwear brand Clarks, working with Major Lazer on ‘Pon Di Floor’ and much more, in the first of this two-part interview...

Vybz Kartel were a group comprised of three artists, including Adijah Palmer, then known as Addi Banton. The group split due to differences in vision, but Addi Banton kept the name Vybz Kartel, joined Bounty Killer's crew, Alliance, and the rest, as they say, is history. Initially coming to prominence flexing his lyrical skills in 2002, Kartel became one of the genre's leading artists shortly thereafter, which included featuring on the Def Jam's US and Jamaica collaboration album, ‘Def Jamaica’, working with Missy Elliott and fans including Nicki Minaj and Jay-Z. Controversy has never been far; from clashing Ninja Man, which lead to a fight on stage, leaving the Alliance then performing at his former mentor's biggest rival Beenie Man's wedding to Bounty Killer's ex-girlfriend, 2 years on-and-off fued with Mavado, to being sued for creating the explicit 2009 hit ‘Ramping Shop’ from Ne-Yo's ‘Miss Independent’.

The Wrap Up: You broke through with a unique style of deejaying (rapping) to dancehall in 2001/2002. Tell us a bit about why you adopted that style...

Vybz Kartel: That style was a combination of listening to all genres of music when Vybz Kartel was growing up. Vybz Kartel always wanted to be different from the regular deejay and wanting to bring something different. In my effort to become different, that style was created.

TWU: Who were your influences back then?

TWU: You started off writing songs for Bounty Killer, so how did that come about and what songs did you write for him?

Vybz Kartel: I wrote about 30-odd songs in total. ‘Gal Clown’ and a lot of those war lyrics were by me.

TWU: You don’t write your lyrics anymore, do you?

Vybz Kartel: No, I don’t write lyrics anymore. I have graduated from that stage. I just meditate or pre-meditate the lyrics depending on if I get the riddim before I go into the studio, or when I go to the studio. I just voice the riddim and listen to the music. The music talks to me and I respond.

p.s. as I said I think this is his first ever UK interview (outside of DJ's Robbo Ranx and possibly Young Lion at 1Xtra), but I couldn't prove beyond reasonable doubt that the now defunct New Nation did one with him. Anyone else that did one didn't register on Google. So yeah, if you wanna cover dancehall and reggae interviews, holla at me for the BEST/unreachable reggae and dancehall artists: marvin.sparks220@gmail.com

UPDATE: Part few (2) is about reinvention, I asked if he borrowed Mavado's style, about making x-rated songs when he has to make clean ones, he gives an exclusive about both his new album and the plans he has to work with Mavado http://www.mtv.co.uk/music/urban/250984-vybz-kartel-the-interview-part-2

Clarks: De Mixtape Raw , it was released on December 10th, and it's available on itunes now:

And if you wanna hear a CD I made which doubles up as a Best in 2010, click here. Has all the tunes from Clarks, Hold You to Cosa Nostra, to Gangsta City, to Street Swag, to Smokin' riddims, to Straight Jeans and Fitted, Fake Jeans, Rum n Red Bull eeeeeeeeeverything. Check it out. Will try up it to mixcloud soonish. Oh yeah, it has drops from couple man like Serani, Wayne Marshall, Busy Signal and Popcaan "Di Queen fi England just love off Marvin". Oh and I threw on a Trey Songz one too. Specially fi di gal dem uzeeeet