Mind on my blog and my blog...

Once upon a time, I said you shouldn't compare Drake and J. Cole because they are different rappers. However, I changed my stance today. FAO Anyone that thinks Drake is a better rapper than J. Cole should focus on pop. If you feel Drake's better, you are a product of the mixtape, lazy punchline era of hip hop. 50 Cent and Dipset is probably your starting point. I'm a fan, but Fif got cussed for his skills back in the day, and that 50 Cent plops on most rappers nowadays. Straight generalisation and I don't care. I'm right. Disagree? You're wrong. It's quite simple.

One quote to dead Drake:

"I left the city for a minute but it's still on my back
Told my n**gas, “Ay Im finna’ put the Ville on the map" - I'll be back
And I'm coming with a deal and a plaque
Cuz I'm ill bitch, they couldn’t make a pill for the rap
Pouring liquor for my n**gas that was killed, send em back
Came home shit is real n**gas still in the trap
Hold up now don’t get it twisted if you slang do your thang
Me I'm like a young Simba couldn't wait to be the king
Witness the dream"

Not only is the flow crazy, the lyrical content is on fire, self-expression without out corny punchlines. If anyone, I repeat ANYONE can quote that many lines from a Drake bar "Without a stupid #DrakeBar... tender" (bartender and tender as in money spent at the bar - double entendre! Add in the fact it's a subliminal. Lyrical dan), I'll stand corrected. Not really, I'll throw another J. Cole quotable at you 'cos it's that easy. UK grime MC Scorcher tweeted J. Cole is a little bit of Drake. Chatting SH*T blaaad! J. Cole is a rapper's rapper, Drake's a singer masquerading as a rapper. Makes very good songs, good sing along raps but he isn't a great rapper. Swear every feature burnt him on his album?

Then tell me can Drake make a powerful song like this:

2nd thought Album of the day:

Skinnyman 'Council Estate of Mind'. One of the single most greatest (does that make sense? You know what I mean) bodies of work I have ever heard, especially from the UK. Gritty street tales, accurate observations, engaging stories, well picked beats and cohesive.

3rd thought If I were a little youngster, I'd reach this to fly down on beanies

I don't even understand that. The Drum and Bass bit was good but it wasn't the selling point of the tune. I know Bashy did it too on Fantasy. I'm not a fan of bandwagon hopping myself. Good on ya Wiley

5th thought inspired by This Is Max

The gorgeous Max interviewed the wifey Rihanna the other day. Let's take a moment to appreciate beauty

Hold on, scroll back up, that wasn't long enough (forget what Rihanna is wearing).

They talk about a lot of interesting stuff, including Rihanna's new man, Drake, dancehall queen influence and other stuff. Someone tell me why the editor faded out Rihanna saying reggae/dancehall is her favourite music. Conspiracy

RIHANNA TALKS TO THISISMAX.NET ABOUT DRAKE, BEYONCE, BOY-FRIEND AND NEW ALBUM LOUD! from THISISMAX on Vimeo.

6th thought inspired by This Is Max again

If anyone reading knows Nicki Minaj, ask her to marry me please?

Which reminded me, I listened to Katy B and thought "I wonder what Ny thinks of Katy B's success"... This time last year they both performed at UK Funky Live in Wembley Arena, both blessed vocally, one has a top 5, going on tour and going down a treat in the dubstep scene. The other removed from Ironik's new single in favour of an actress, makes YouTube videos, sings on ustream, and well... she still looks good I guess. Ny baby, you'll get there. If ever you want consulting, holla at me baby. We can go for some Nando's. I haven't got a black card, but I have a bank card :)

Oh and one last thing spotted over at Mad News

FREE MA DARG GAMU!!! Not sure that's the appropriate way of requesting someone gets her stay in the UK but once again you know what I mean

Her controversial autotuned up performance

Judges house which saw her lose out to 2 singers that didn't even finish singing the song.

First Cheryl punched my girl and still managed to turn into a superstar (with the assistance of association with Vicky Beckham, being cheated on by footballer Ashley Cole) 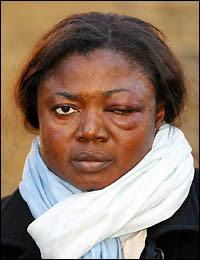 Now this? My gosh, this woman wields some power. Look at them adorable dimples. 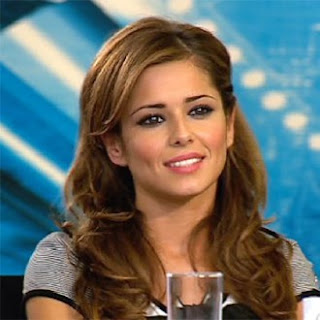 p.s. I tweeted: "Wouldnt it be funny if Gamu turned to Cheryl and shouted "this is for Sophie Amogbokpa" *paxxxx* (I dont condone violence)" I chuckled at the time. The BBM broadcast message I received that night wasn't clever but it was funny. However, it has made The Sun newspaper. Death threats aren't funny, the fact he spelt Gamu's name "GamBu" when 'B' isn't immediately next to M, spacebar wasn't required, and this was on BlackBerry not touch screen iPhone, he clearly didn't care about her name that much. But hey, Mr Capone (or can I call you Supe's? Supa?), I feel where the anger came from my brodda. Don't come fo' me eh...