October 18, 2010
So I failed to post over the weekend. Didn't have the time. I feel like a failure. One day very soon we won't use this (no [insert word]) disclaimer. It's dead. I'll wait for some uncool dude to use it.

So Lethal B/Lethal Bizzle/Jizzy Tissue wants to recreate Rage Against The Machine's anti-pop Christmas number 1 last year. Don't frown like "Oh that song's old" it's a stone cold classic that will never get old. And anyway, Rage Against the Machine's song was 10 years old. Peter Andre's 'Mysterious Girl' got re-released in '06(?) after his appearance on I'm A Celebrity Get Me Out Of Here so it's possible even though it got top 5 in '95(?). I'm for this idea. Not sure about this talk of re-doing the version. That's like So Solid doing a new 21 Seconds. Some classics should never be touched.

Album he's talking about is called My Beautiful Dark Twisted Fantasy, so I guess this is his fantasy: 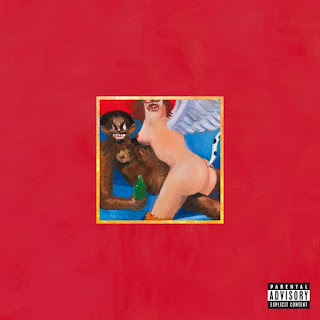 What's he playing at? Come like he thought "I'm so damn talented I can make sh*t and people will find a way to appreciate it like they've done for everything since I put out Graduation. Let me go back to Windows '98, open paint and give them a 'retro themed' bullsh*t. They'll love it." Nah mate, since the Taylor Swift incident you have to be on your A-game son.

Some would call him a window licker, but exhibit C shows him to be a baldhead licker. Both her hair and windows are transparent. Same difference in my books 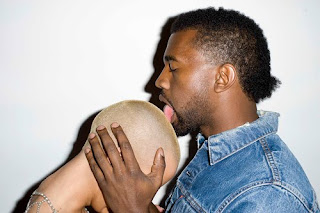 Yeah, I don't care for Omarion either but I found this interesting. When I say interesting mean I don't feel badmind for thinking he's over here in the UK pimping himself 'cos he's got money problems. He has been doing every radio show possible, performing everywhere (heard he was in Peckham the other day), and even begging with the UK Funky scene. You know you've hit the skids when you're begging it with washed up funky artists Gracious K and KIG, that's some real sh*t (see what I did there? Skids and sh*t). To think this time last year he'd just been dropped by Young Money and replaced by Lloyd on the now annoying Bedrock. Yesterday Twin B on 1Xtra was on a mission to set him up with Dot Cotton from EastEnders. Omarion was on it (hadn't seen the pics obviously). Saying that, she most probably has more pee (£) than him.

"A bum sent in from outer space..." inspired by XFactor via Brown Eyez 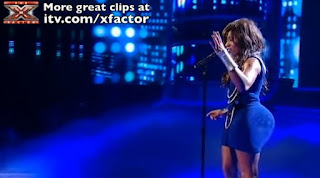 She can sing too. Singing Prince's 'Purple Rain'

In case you didn't get the "A bum sent in from out of space" (genius title if I do say so myself), it's a rework of the Max Romeo 'Chase The Devil' chorus. Yes, the same song Kanye West sampled "Lucifer son of the morning( mourning?), I'm gonna chase you out of eart'":

Which you may know from the Prodigy 'Out of Space'. Get your "big fish, little fish, cardboard box" on. Check the skank @ 1:30, SICK! The drums on this are ridiculously heavy!

Who said Marvin Sparks' blogspot isn't educational and *ODB voice* "For the kiiids"? Don't worry it'll go to some more ridiculously stupid/peculiar stuff in a matter of sentences.

Leading on from Prodigy 'Out of Space'...

I have no idea what he's talking about. I'm in a trance, focusing solely on the drums. Imagine being old enough to zone out to this in some random field. Why's the man rocking his hips like that? And for the first time I caught some of the lyrics, what's a "lipstick boy"?

"It's the ROC!" Jay-Z. "What's that blud? You want a O of weed? Cheese or lemon? Aight fam, say nuttn." Kareem Biggs, 1/3 founder/funder? of RocAfella records.

Read all about it here

So Buju Banton gets arrested for intentions to deal coke (re-trial is supposed to be next month after jury couldn't come to a conclusion), and Kareem "Biggs" Burke done for weed? Surely there's a mistake somewhere here. Jay-Z freely speaks about dealing coke regularly ("Like I told you sell drugs, no, Hov did that so hopefully you won't have to go through that" - H to the Izzo) and Buju buns the herb.

There were 45 of them. Yes 45. That's nearly half as many artists, producers and DJ's in So Solid if I believed everyone that told me "Yeah my cousin is in So Solid".

Been fully rinsing this. Along with Dexta Daps 'Mama Stop Cry' this received numerous repeats on the preview. I know this tune won't get much airplay over here. Why? Because it isn't slack talking about acts of a sexual nature, nor is it a gun tune. Anyone that listens to this and says they don't feel where he's coming from is a punk, straight. People wonder how I listen to dancehall all the while because they think it's a bunch of uptempo slack stuff. Nah mate, you got it twisted. This also counts for Quote of the Day: "But don't you worry mama I will be your pension." My parents are the main reason for my ambition.

p.s. there is a reason why the amount of dancehall recommendations has decreased over the past few months and it has nothing to do with the quality of releases. Stay tuned. Possibly this week all will be revealed.

Jamaica's National Heroes Day today. Big up Nanny of the Maroons, Paul Bogle, Norman Manley, Sir Alexander Bustamante, George Gordon, Sam Sharp and the man Marcus Garvey himself. I'd also like to big up Bob Marley, Dennis Brown, Michael Manley and all the others yet to be included. You are all heroes. For more info click ya'so

Went daaan the pub in Balham to see a man about with a guitar sing some tunes. Second time I've seen Ed. First was in March. I still think this guy is the truth. Real lyricist, amazing voice. Sidenote: I hate using "amazing" to describe anything. I think of them hippy/boho chicks saying it in the way where they stretch the "-aaaaazing" bit. The lucky lady I went with insisted on getting a CD. Got her Loose Change ('aaaaaaaard). This isn't on there though. Can't wait for both the Live EP (recorded yesterday) and Collab EP.

Check the lyric: "I could do without a tan on my left hand where my fourth finger meets my knuckle". The lyrics from 2:38 onwards are magical (no homo) (I've decided I'm going to run this bracket thing into the ground :) ). Bruno Mars, duss out to Mars bruvva, Ed Sheeran will dun your dance bossman.

My favourite tune is still A Team. The place rang off when he performed You Need Me, I Don't Need You, especially the "My eyes are red, I been burning..." bit. The generic-split-the-crowd-in-half-call-and-response-bit-was-not-generic-at-all. East side (dubbed Millwall) doing "You need me man I don't need you", whilst West Side (West Ham) shouted "My eyes are red!" He's so talented I don't even judge his faux patois. I choose to buss gunfinger and make assortment of gun sounds. In fact the place lifted off during the dancehall/reggae breakdown.

Just found this of when he appeared on Jamie Foxx's Foxxhole radio show. Ended up jamming around Jamie's gaff too in LA.

Bit pants if you ask me. Oh what you didn't ask me? My bad. Has nothing on Rainy Days. Think this provides me material for a future post this week! A long awaited post at that. As in a long time I've wanted to do the post not a long time you've been waiting for it.

I know it's supposed to be a thing voted for by the users but you mean the *whispers illuminati/Freemasons* didn't have a word to ensure Jay-Z was in there? The problem with these lists are civilians don't always make wise choices; be it XFactor, Big Brother... or politics. Hype over substance is never kool. Lil' Wayne shouldn't be over 50 Cent and Kanye. How 'Kiss is in there I'll never know. I'm a Jada fan from We Are The Streets but nah.

I got this from Mad News who got it from this dude. Why's he worried about F-A-B-O? Fabolous hasn't been good since he stopped spelling his name on every track. And look at his examples. One tune to dun all them records dance?

Why can I only find the remix of Keepin' It Gangsta? Hot remix but still. Hasn't got the

Some of the lyrics may be wrong. I haven't heard it in a couple years so that's off the top