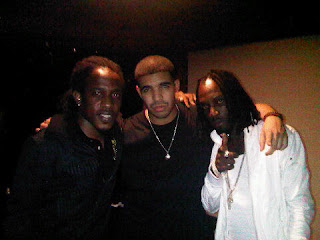 You read the title correctly, part again. We don't test two what about you?

Part 1, we spoke about how he managed to get Estelle on the remix for his single, why he chose the controversial Island pop sound for his single and his idol Bounty Killer. Pretty much a formal interview.

In part again, I go a bit more dancehall. I did ask about his appearance with Sean Kingston & Nicki Minaj 'Dutty Love' + whether him and Drake are going to collaborate. Oh and about Toddla T's single 'Sky Surfing'. But yeah, more dancehall-oriented; Wayne Marshall and I spoke about his beef with former friend and collaborator Vybz Kartel, both why he never responded to blatant disses and whether they'll work together in the future now that they've made up.

If you didn't know, Wayne Marshall was the big singjay in the scene before Mavado came along. That isn't me saying Mavado stole his thunder so don't try it, I'm just putting his career into something you can understand if you don't know. Anyway, from 2005-2008 he went quiet so I asked about that, as well as his marriage to former Akon protege Tami Chynn. Remember the stunner Akon brought to 1Xtra Live? Yeah her. And ended on whether dancehall has changed for better or worse in the time since he burst onto the scene in '01

I much prefer this half of it. In my head, part 1 was more commercial-friendly.

Anyway, check it out here: http://www.mtv.co.uk/music/urban/235910-wayne-marshall-the-interview-part-2

And remember My Heart is out now on iTunes here