November 01, 2009
For a brief (in comparison) on point review head over to my dargette NewsyChick. For one of my in-depth play-by-play, continue.

I was excited when I first heard the show announced via @HanifBoogie's twitter back in August/early September. Not only would this be the first Shabba show in 13 years, it would also be the first dancehall show at Brixton Academy in almost as long. However, with the excitement came curiousity as to what this Shabba in 09 will be like. "Will he be off his head on drugs like so many of our legends are? Will he be overweight and lack the energy we all came to know? Has his time away turned him into a recluse and mad at the world?" were some of the questions that ran through my head at the time. Undoubtedly the biggest one was "Will the show actually happen?" We all remember the well-documented interview on The Word. Surely Peter Tatchell and his gang will come out in full force, won't they?

Well they didn't and praises to Jah for that!

So the full line-up read Shabba Ranks, Chaka Demus and Pliers, and Maxi Priest. At £30 per ticket, that was a bargain. That's 3 of the biggest commercially successful reggae artists in the last 20 years over in UK with many classic records that are guarateed to be included on every cheesy reggae compilation going.

Taking all that into consideration, let's just say I wasn't surprised to hear Chaka Demus and Pliers wouldn't be performing due to illness.

Back to Shabba, he appeared on Robbo Ranx's 1Xtra radio show the night before. Anyone who follows me on Twitter would have been able to tell my excitement from my tweets. Shabba was none of the shell of a man I anticipated. He was still hilarious, charasmatic and possessed the distinct barritone voice. Shabba was just as I remembered. The morning of the concert I tweeted "I woke up this morning excited. Last time that happened was as a yout on Xmas morning. Shabba last night got my hyped for tonight" 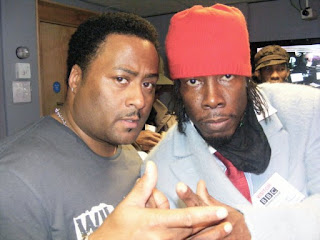 Got to the show as Robbo finished up his set. Sounded like it was a new skool set. Blacker P from Vibes' set was laced with reggae smashes by Dennis Brown, Sanchez and Garnett Silk. Gunfingers aloft for every tune.

Next dude shelled down the place with 80s/early 90s riddims ranging from Answer, Sleng Teng and Punani to Bogle. Just like to take time out to say Super Cat was THAT guy. I gave a forward to Terror Fabulous' Position standing next to my mum. Are you ever old enough to do that?

Following a 10/15 minute interval much to the now impatient crowd's displeasure, Ruff Cut band were fully strung up. "YO" rang out through the venue as someone tested out the mic, I thought "I know that voice"... A recording of Michael Buffer's "Let's get ready to rumble" was played, Ruff Cut band ran through familiar riddims whilst that voice from before said what sounded like a prayer. When the band played Shabba's opening track, Get Up, we knew what time it was. The anticipation was overwhelming at this point, you could feel the wait was nearly over. About 18 years since he last stepped on an English stage was ended when Shabba, decked in all black with a green tie, appeared from the back of the stage where three Jamaican flags were waved for the entirety of the show. Gone was the lean high-top, replaced by plaits. "Shabba... Him Deyah" was actually a reality, as he begun to reel off big hit, followed by big hit consistantly.

before embarking on a medley over what a DJ earlier in the night dubbed Shabba's riddim, once again, the Punani riddim.

Love Punani Bad was the last song of that segment. During this time, he'd been whining, jumping across the stage like a man half his age. His energy was incredible!

Shabba, who we remember as the loverman ("Shabba"), reminded us of his versatility with songs such as Reality, Respect, and Having It All.

Mr Ranks' next trick was to bring out guests starting with Mykal Rose for Shine Eyed Gal - much to my surprise. Unless he lives here, I didn't expect another Jamaican artist to appear. Band played Shoot Out riddim for Mykal Rose to perform his most recent hit "Police and thief inna shoot out" then appeared to have memory loss or maybe the occasion got to him when Shabba said they were going to perform a new song. It was just bass and drum so he couldn't say level to mark time. Strange, but got over it.

Other guests included JC Lodge (Telephone Love), think it was the original man Home T for Pirates (sounded like him), a young looking lady, Selena Serrano, sung Twice my Age and his most famous song Mr. Loverman "Shabba". Maxi Priest sounded exactly how you heard him on House Call. I could tell people were satisfied at this point because we all clapped at the end of each song. For anyone who goes to dancehall shows or even hip hop shows will know we black people don't do that normally. Initial forward yes, clap at the end? NEVER!

Ending the night with "more hits" Trailer Load of Girls (with about 7 girls on stage). Let me pause there, there was some girl decked out in all black (including them black wet look leggings God sent from above) who could brush the floor with her rear judging by how low she went. Shabba took one look at her, stood their poised like he was ready to strike, she got nervous and stopped. Shabba took her centre stage and begun daggering/whining her. At this point, Shabba had taken off his waistcoat, shirt then his black tee, so he was performing shirtless.

Last song was Ting-A-Ling!!! The other most renowned song. Due to the nursery rhyme sing-a-long nature it turned into a collaboration between us and him. For the encore Shabba urged us to continue supporting Bounty Killer, Mavado, Vybz Kartel, Beenie Man, Busy Signal and Assassin, "but most of all continue supporting ya Shabba Rankin" before dropping the mic and walking off his now cremated stage.

Host Robbo Ranx (or Daddy Ernie, but I'm sure it was Robbo) came back on stage to declare "Shabba... did deyah"

Best performance I've seen in years!!! Consumate professional, oozed charisma, mastered crowd control, right balance of hype and calm, quality set list etc. £30 well-spent. Even my dad said it must have been good for me to keep going on about it. I actually left feeling satisfied for once.

Don't watch the blurry nature of the following pics 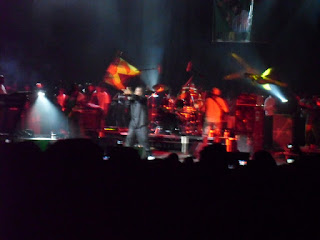 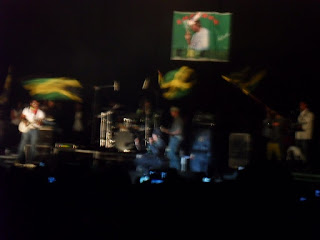 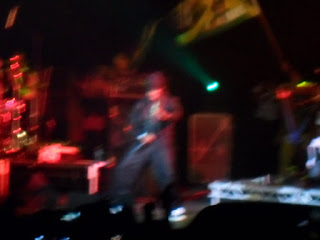 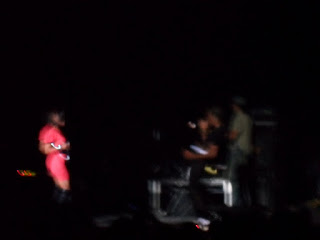 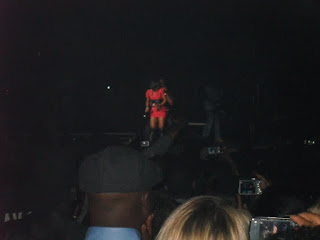 Selena Serrano, who sung Mr. Loverman and Twice My Age 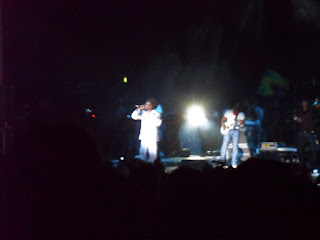 Didn't take good/any pics of the other guests

Shabba came, he saw and he conquered 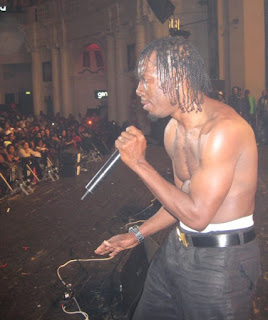