WTF?! Please Say That Is NOT Beyonce

Actually, I'm gonna tell you a little story - the creative side of my brain has kidnapped my fingers. Now, when you see the inspiration, I know you are going to think "All of that for this?" but what can I say? My brain is running.

After No x4 as part of the original Destiny's Child and the 2nd song with JD I've been a fan of Beyoncé. Thought she was the sexiest thing alive, plus her name was on a next ting. Imagined her being my girlfriend, tore out pics from magazines etc. all the things we do as kids.

I must admit once upon a time, I remember it vividly, it was around the time she was about to release the second album BDay, I never thought she was all that. Media hype turned me off her like media help me dislike certain national football teams/football players. Her peak, for me, was around the time of Goldmember. My gawd she looked mad healthy.

She fell off after that though. Looked like she lost weight to be accepted universally for her beauty. That Baby Boy vid (big tune) was the turning point. Obviously she started her fling with the boof mout' bwoy Jay-Z by this time. That was devastating. No homo needed but if it was someone girls liked for example Usher I wouldn't have complained. Rags, I'm possibly better looking than Jay-Z.


The dancing bit in the sand offends me to this day

Then I was invited to her album listening party. Took the day off work (legit I swear), obviously I wanted to hear the music, it was also the chance to see my estranged girlfriend (she never knew at the time... ok she still doesn't know) but even more than that to see if she was worth the hype. This was make-or-break stuff. Waited for about 30mins (longest 30 mins in my life), had a bite of some mini burger I could have sky'd and swallowed in one (if it didn't look like the cook just finished killing the blasted thing) and waited some more.

Finally there was some movement outside, the paps begun to move frantically. I spotted someone I recognised from TV. "Oh look it's, it's..." "Matzih Varni?" (not really I stole that from Michael Jackson's Speed Demon)... (ok I'll get my coat, that was dry). I'll start again shall I? I spotted someone I recognised from TV. "It's, it's, that's her mum?" I asked my friend (after a nudge of excitement). She (my friend) didn't seem too bothered. Mum was much smaller in real-life (isn't everyone?). Anyway, now I knew Beyoncé was in the building. The excitement in my bones (no crude jokes thanks) grew (I warned you!!!), for the first time ever I felt like a fan. Wasn't going to faint or scream for that matter, this is industry invite-only business - can't look like that fool.

Mic man took to the stage, "Ok, she's about to walk in" I whispered in my bassy-est voice (that's me tryna man up). He announced Beyoncé, we stood up like it was an important political figure, the doors burst open, and in came... these two fat blokes a.k.a. security. So now I'm trying to tip-toe to get the exclusive first eye-contact with Beyoncé (that's me increasing the chances of love at first sight). Lemar was in the building so I had to be quick of the mark (no no homo required). In she walked, open was my mouth. Missed the eye-contact because a. I got a nudge back after repeatedly nudging my friend again and b. I kept blinking in amazement.

Finally we meet!!! At this point, it was just me and her in the room. She walked maybe 2 feet in front of me, I saw her smile and wave at me (on my life), but I was still blinking. She stayed to introduce a couple tunes; remember it like it was yesterday. First was DeJa Vu with the geriatric camel (fully hating), up next was exclusive showing of Ring The Alarm. Woi what-a-terrible song. Irreplaceable was after that. I'm gonna hold the list there; from I first heard that song I knew it would be a smash. It's just one of them songs alie? Fourthly (can you say that?) was Green Light. Then off she went.

Babylon (some form of authority not police or anything special like that) in the venue tried to tell us we weren't allowed to take pics and to turn off all phones. Man like me iz a rebel so I switched off my phone (no reception anyway), but turned the flash off my camera and took sneaky pics. 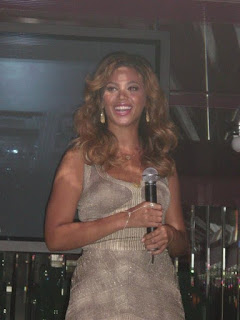 Was an absolute stunner


Couldn't believe it. Stopped off at two bredrin's (friends) houses to show them the evidence on the way home. Gotta make the most of it, right? There was an England match on so there were more bredrins in one place than usual.

However, (back to the original point now) nothing has offended my eyes since the Baby Boy vid like this has 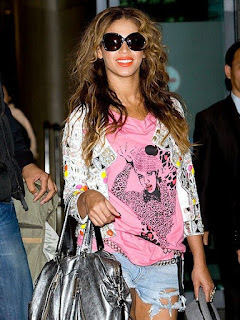 Hands up, who wants to tell me that is not a younger version of Latoya Jackson? Wha' gwarn for her face? It doesn't match the glorious golden brown legs. And the ratty weave? I don't even mind a girl with horse or imported hair. I'm with TLC on "You can buy you hair if it won't grow," but at least make it look presentable. The weave look all frass out. Ladies holla at me and break it down where she went wrong. I'm so confused right now. I need help understanding how one so magnificent can even look like this on a bad day. Beyonce and bad day's don't go. Like Marmite and, well, erm, anything it doesn't go. 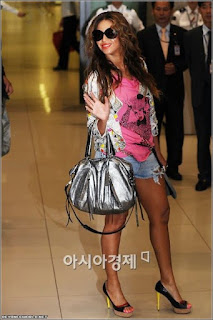 We know she's gonna be looking banging again, was most probably hot stuff by the end of that day, so don't take this as I've quit pursiting. I'm just horrified. For now I'll stick to my other crushes Sadie Ama and fellow top 3 UK selected Cheryl Cole (Max could possibly be third. Isn't she just adorable?).

p.s. I know the internet is a powerful place, but there isn't a need to actively snitch to any of the females mentioned. Let cupid work his magic else karma will come for you!

p.p.s. *thinking out aloud* I may make this another one of my series'. Will try to come up with a catchy title and boom.