BNP on the BBC 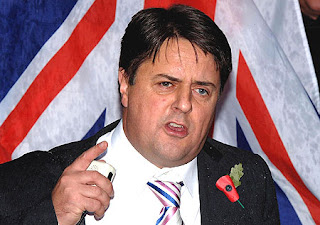 So there's a lot of controversy concerning the appearance of racist/fascist/"nationalist" extreme right-wing BNP leader Nick Griffin appearing on fully skenged off show Question Time. Ok, more than a lot of controversy; this has been on the news for tiiiiiiiiiime (couple weeks equates to tiiiime), protesters outside the BBC building and all sorts. There's ag' in the village!

First things first, we need to get the formalities out of the way: Nick Griffin's face reminds me of that arcade you and your mandem - and sometimes random mandem join in - where you test how hard you can punch. I've found the run up and SMASH!!! works best for me. I don't condone violence, I'm just saying he has one of them faces. 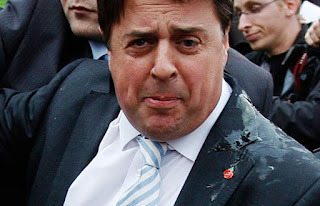 Did I lie? (the gunge on his shoulder is egg)

The BNP are nothing more than professional racists. I respect them for that (in a sense), because unlike many other people they are slightly more blatant with it even though they try to deny it (who believes them apart from those who support/empathise with them?). In doing so, they expose the other racists in authority who we saw named and shamed in the leaks of BNP member lists.

As a proud black man myself, I see no problem with him being on the show. I understand people saying he shouldn't be allowed that forum, but fact is BNP are one of the fastest growing parties, recently actually managed to win 2 seats in European Parliament (MEPs). How many more people are going to know more about the BNP tonight than they would have known before? Will it really make a that much of a difference? Tories will win the next election and I doubt BNP will gain many more seats than they would have done without this appearance. All the BNP do is tap into the psyche of those who already lean that way.

The real problem, in my humble opinion, is not the platform this single show is giving them, rather the platform they really owe thanks to; everyday newspapers like The Scum or Sun whatever and Daily Express banging on about "these bloody foreigners" which in turn fuels the fools into thinking they are somewhat inferior to those "job-stealing/benefit-taking" aliens. I don't even understand that "logic"; how on one hand can you be complaining about them coming to sponge off the system, then complain they are taking all the jobs? It has to be one or the other no?

This has lead to BNP growing in support without really having to put money into Political Party advertising (or whatever it is). Those papers (and some news channels) make out like Englishmen and women are forced to scavenge on leftovers in their own country - that is the real problem NOT Question Time.

Also, maybe we should address why the BNP are so in-demand. Instead of sweeping everything under the carpet thus making the issue taboo which then leads to the problem intensifying, let's give the racists a soap-box. What they should do is level it with some reasonable non-hippy, non-too-politically-correct mid-left-wingers and some general people with sense to throw facts at him.

BNP manipulate the minds of the ignorant with half-truths and colourful vocabulary to make it seem as though the problem is a pandemic and requires urgent attention. It's a sad day when they are classed as the voice of "forgotten Britain" who coincidentally have always had an alien messing with them from the Irish, the black's to the Asians (Indians, Sri Lankans, Bengali's and Pakistani's), the Somalians now to the Eastern Europeans. Expose the whole truth in the face of the "nationlist" and let us hear his answers. Don't even give him open question which allow him to spew his nonsense, expose the half-truths and ignorance.

Like every relationshio, communication is the key. To solve this problem, we need to hear both sides in order to erase the ignorance. As long as there is balance, hopefully we are on track to solving it.

I guess these same people who cross the BNP box, protest about Bank Holiday for St. George's Day, wear the Union Jack with pride and proclaim their "Britishness" forget what their Great British empire who went around colonising these places did in years gone by. The chickens are just coming to mother England.

p.s. I am not a BBC employee so it's not that, but BBC are the evil guys at the moment therefore an easy-scapegoat. They themselves "waste taxpayers money on pampered presenters" namely Radio 1 loudmouth Chis Moyles and the "disrespectful" road-running-rebel Jonathan Ross (doesn't make sense, but I used alliteration because I doubt Wossy can pronounce it lol).

However, I do wonder why BBC (and Channel 4's program next week) are during Black History Month.

Disclaimer: All IMO (in my opinion)