September 14, 2009
Yes, I'm mad late on this - busy day today. If I'm honest most of my initial emotions have moved onto pastures new. I've had time to think about it + tweeted most of my thought. To be honest those factors take away from making the best rants. However, I wouldn't write this if I didn't have enough for the reader.

"Get on with it!" I hear you scream. Alright, I hate when people ramble intro's too.

(Head over to http://www.thatgrapejuice.net/2009/09/mtv-vmas-2009-performances.html for the performances. Can't get the embed code)

Truly magnificent! That's what you call a tribute. I think recreation was lead by Wade Robson I believe. He choreographed for Britney, Nsync and other top acts. Also had that MTV show back in the day 'Wade Robson Project'. Execution was beyond on point. J-Lo's ex-hubby from when she was that chick Cris Judd was up in there. Janet sounded mad aggressive, the bit where she was dancing "next to" Michael was the beez neez!!!

Not looking forward to MOBOs soon-to-be woeful attempt. They've got Jermaine Jackson and the Shangoolie kid from Britain's Got Talent + Michael Jackson memorial. Now what are they really going to do? If they don't have Flawless and Diversity somehow involved in the tribute we know it's gonna be waste. Now I've said that, I bet they have both. Even though it will draw comparisons to VMA's at least it will be better.

Apologies, I gt sidetracked, this is MTV VMA

Single Ladies (with a couple lines from Sweet Dreams)

"Head over to http://www.thatgrapejuice.net/2009/09/mtv-vmas-2009-performances.html for the performances. Can't get the embed code)

Beyonce is that chick! No one in the game puts in that much on stage. The mass choreography was effective as well. Wonder if being single was part of the criteria. Saw a couple I wouldn't mind put a ring on, or even my dong... What?! I wasntt going to be disrespectful. Woman is the best thing Jah created, ugly fat ones too!

I can't comment on Pink or Lady Gaga. If I'm honest I can't be arsed to watch them. I'm in love with Pink though if that's any consolation.

Now the formalities are out of the way we can move on to what made the VMA the most notorious awards show - excluding the Source awards; they should have held that in various projects - the 'It'll be alright on the night' moments. Remember that dude scaling the decor behind the desk thing they give awards from?

Starting with the least controversial, Jay-Z featuring Alicia Keys and surprise guest Kid Sister. No, Lil Zane. Nah that wasn't the one either... Lil'... Lil'... Mama that's the chick.

What was she playing at? Like really, I didn't even know she was still in showbiz.

“I did not mean any disrespect towards Jay-Z or Alicia Keys,” the statement reads. “I admire them and look up to them as role models. ‘Empire State of Mind’ had my emotions running high. In that moment I came up onstage to celebrate my two icons singing about NY.”

She walked on what was a moving tribute to the city that raised him and turned it into a circus on her Jack Jones (own). Lol @ Jay asking if she's T-Pain tonight. 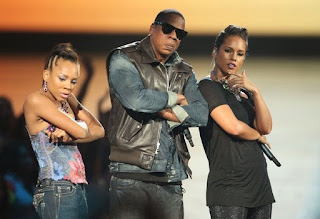 This pic is hilarious! Alicia wonder what Jay's gonna do, Jay looking like he's holding a wasp hostage in his mouth thinking "Wait til I get off this stage, Chris Brown won't have shit on me" (I don't condone men hitting women, nor stating Jay hits women merely commenting for comedic purposes), Lil' Mama "Erm... I was told KanYe was this way. (Damn this chopper suit didn't make me invisible)".

What a [insert 4 letter expletive of your choice]?! What is he playing at? Firstly, the one type of American you don't mess with is a blonde "attractive" American sweetheart who sings country music. She symbolises everywhere outside of the multi-cutural places in Yankland = the real $$$. We loved you when you did it against Bush because it was true. Ok, you did it to some band who's name I didn't know then, don't know now, but you were still cool then. Now you're this big superstar who has well and truly made it. Know how I know? You released a utterly bs album yet managed to sell loads. Try pull that stunt again and see how the bandwagon doesn't work for you. Every celebrity who has commented has been against him; Pink called him a piece of sh*t, Katy Perry compared it to him stepping on a kitten (how very ufckin clever Katy!), Marsha "boy better know she's boss of this falsetto ting" Ambrosius wrote an essay on twitter. We all know Bill O'Reilly will have something to say.

How dare he talk about give a black man a chance? He doesn't even rep black people like he did once upon a time. IMO Graduation and 808's and Heartbreaks even moreso were made for "crossover audience". I don't relate to him, his tight jeans, YMCA-esque taste in clothes, weird/off-key haircut... In fact the only thing I rate him for (outside of work he's done for others) is the slag he rolls with. He thought outside of the box, got a bal'head chick who inspired other chicks to adopt what was once thought of as a dyke cut. Her face isn't all that but her body is amazing.

Anyway after deleting the first one,

I’M SOOOOO SORRY TO TAYLOR SWIFT AND HER FANS AND HER MOM. I SPOKE TO HER MOTHER RIGHT AFTER AND SHE SAID THE SAME THING MY MOTHER WOULD’VE SAID. SHE IS VERY TALENTED! I LIKE THE LYRICS ABOUT BEING A CHEERLEADER AND SHE’S IN THE BLEACHERS! …………………… I’M IN THE WRONG FOR GOING ON STAGE AND TAKING AWAY FROM HER MOMENT!…………….. BEYONCE’S VIDEO WAS THE BEST OF THIS DECADE!!!! I’M SORRY TO MY FANS IF I LET YOU GUYS DOWN!!!! I’M SORRY TO MY FRIENDS AT MTV. I WILL APOLOGIZE TO TAYLOR 2MRW. WELCOME TO THE REAL WORLD!!!! EVERYBODY WANNA BOOOOO ME BUT I’M A FAN OF REAL POP CULTURE!!! NO DISRESPECT BUT WE WATCHIN’ THE SHOW AT THE CRIB RIGHT NOW CAUSE … WELL YOU KNOW!!!! I’M STILL HAPPY FOR TAYLOR!!!! BOOOYAAAWWWW!!!! YOU ARE VERY VERY TALENTED!!! I GAVE MY AWARDS TO OUTKAST WHEN THEY DESERVED IT OVER ME… THAT’S WHAT IT IS!!!!!!! I’M NOT CRAZY YALL, I’M JUST REAL. SORRY FOR THAT!!! I REALLY FEEL BAD FOR TAYLOR AND I’M SINCERELY SORRY!!! MUCH RESPECT!!!!!

here is his apology part 2:

I feel like Ben Stiller in "Meet the Parents" when he messed up everything and Robert De Niro asked him to leave... That was Taylor's moment and I had no right in any way to take it from her. I am truly sorry.

Who's kanYe going to interrupt next? Obama? *someone from audience shouts too late*