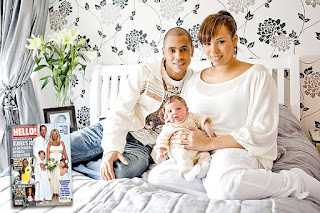 Javine and Harvey Split
Last update: 15 Sep 2009, 2:18
MC Harvey and Javine Hylton have broken up – less than three years after their highly publicised affair behind Alesha Dixon's back.

Ironically, the couple, who have a one-year-old daughter, spilt after Javine caught Harvey cheating.

A spokesman for her said: 'Javine has left Harvey and the family home for a myriad of reasons. The main crunch came when she found evidence of him being unfaithful.

'She now wants to be left alone to regroup, resettle and care for her daughter Angel.'

In our video below, Harvey hits back at the scrutiny he's received from the public over his private life.

He blasts: 'Concentrate on your own relationships and your own life. I'm sure there are people out there who've had affairs. The only difference is that mine is documented.'

Heres the vid they are talking about. Not sure if its old

I feel like a contestant on Bruce's Price is Right. Wondering where I am going? Well I'm wondering if he upgraded or downgraded from Javine. He most definitely went "LOWER" the last time.

He failed. He's gonna have to go around with Jermaine Defore and them losers picking up bimbo gold diggers desperately-seeking fame so they can sell a sex story before embarking on a glamour model "career" complete with biography, or as I prefer to call them "career slags". I'm not knocking you career slags; supply and demand so you serve a purpose.

If Harvey could spit (hence "'s around MC)I would feel sorry for him, fact is I cringed whenever he touched mic. Unlucky pal, chin up

She's a butters failure whatever the weather. Feel sorry for the daughter