Ideally I would have updated this from Tuesday so it would have been in easily digestible bites but I forgot.

This is the 5th series (if I recall correctly)of the popular 24/7 filmed 4 weeks leading up to the big fight. 24/7 provides the viewer with an in-depth look into the gruelling training sessions, reveals both fighters personality outside of the fearless bastard they are in the ring, relationships in the training camp and family, and everything in between. Shot and edited immaculately, it almost looks like a movie. If you can't tell it's fair to say I love these shows.

Great way to build profiles and (or in my case add to) anticipation for the showdown as well as provide casual arm chair fans a look at the smaller named fighter. 24/7 played a big role in making Mayweather the big marquee name he is now. At the top of the century 'Money' May was struggling to attract big pay days he felt he deserved. Fast forward to 2006 he fought recently deceased warrior Arturo Gatti, a fight which brought initially this format, and Mayweather - the victor in the fight - pitched himself as the heel (arch enemy), flashing his money, cocky persona, trash talking etc.

This series documents Floyd jr. & sr. on-again-off-again-now-on-but-for-how-long relationship, Marquez's strange choice of juice, appearance from a man I hate on for messing with my future lover Mel B (Eddie Murphy)... But trust me, watch it if you like good programs. Even if the fight has finished, watch it to see what training camp is like. The result of the fight doesn't take away from the program.

I chuckled at how many 50 Cent songs they played when Mayweather was on screen. The two friends had a "physical fight" after the De La Hoya fight. 50 claims Mayweather is no longer undefeated, I don't believe the fight actually happened. And I swea Rodger only knows 3 facts about boxing. Can't fool me!

To the fight: this will be three-weight world champion Marquez's first fight at Welterweight meaning Mayweather is the naturally bigger fighter. In addition to that Marquezz weighed in 4 pounds lighter than Mayweather. This suggest JMM (Juan Manuel Marquez) will be aiming to keep up with the incredible speed PBFM (Pretty Boy Floyd Mayweather) possesses. I'm not sure if that was the right idea. Not like I'm an expert or anything but I would have gone in as heavy as possible hoping I would be strong at the weight.

What many people watching JMM for the first time will not know is he is a fighter with incredible heart, ring knowledge and intelligence. He survived 3 knockdowns in the first round at the hands of Pacquiao to rescue a draw (he isn't chinny don't get it twisted). Many, including I, felt he did enough to win the fight. Was robbed in their second encounter hence Pacquiao rejecting a third fight. Believe me, he is no slouch. Pac-Man is lightening fast, possibly as powerful as PBFM, main difference is styles; Pac-Man is an aggressive southpaw, PBFM a counter-punching orthodox meaning JMM will have to force the fight on the front foot. The Mexican is more than capable of doing it and doing it well, he forced Pac-Man back.

People are placing all their eggs in the Mayweather basket. Many on twitter are fairweather big fight fans casting their opinions based on ignorance like they know it will be an early KO. Main reason why I want Mayweather to lose or Marquez to give a tough fight, ideally a split-decision points victory for either, is as a boxing fan I want the sport to be a winner. Remember the ignorant "fans" who thought Hatton would wipe the floor with Mayweather? Betcha they are all Mayweather fans now. Same people who were introduced to Pacquiao after he lights out'd Hatton. In an ideal world JMM will win then go on to fight Pacquiao, Money Mayweather will man up and fight Shane Mosley, boxing grows.

Having said all that if forced to make a prediction I believe the victor will be Mayweather on points. Mayweather is gifted beyond belief with all the right tools to win the fight I just hope Marquez gives a performance he'll be proud of.

I've seen a live PBFM training session when he came to promote this fight in London. He's a nice chap, signed everything put to him for about 40mins. 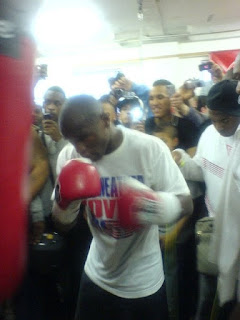 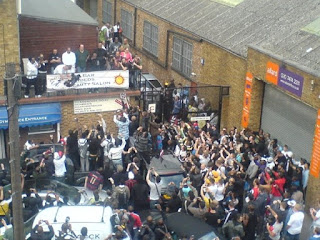 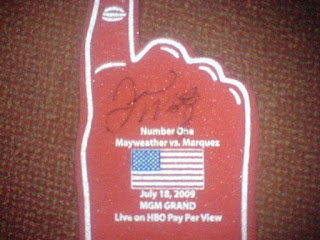