Former world boxing champion Arturo Gatti, who was raised in Montreal, has been found dead in northeastern Brazil.

On a second honeymoon with his wife and 10-month-old baby, Gatti's blood-stained body was found in an apartment in Porto de Galinhas, Brazilian police say.

A police investigation is underway, but few details are being released. Foul play is suspected in the death.

Gatti's body was found at around 6 a.m. Saturday morning. He was found in his underwear, with blood stains on his neck and the back of his head.

Nicknamed "Thunder," Gatti was one of the most successful Canadian boxers in history. Beginning his professional career in 1991 at age 19, he scored a third-round knockout in his first bout.

Born in Italy but raised in Montreal, the 37-year-old Gatti retired two years ago.

Can't believe it man. Just under 2 years after his last fight.

Wasn't the most gifted fighter in the world or anywhere near it, but he approached every fight with the mentality of "It's me or him" before brawling toe-to-toe which usually resulted in exciting fights. Linked up with trainer Buddy McGirt who changed his style to a more reserved style. Last time I saw him fight, he was embarrassed by first series of The Contender contestant Alfonso Gomez, but he was past it by then. Mayweather already beat him convincingly on Mayweather's first appearance on PPV (to my knowledge, but it was definitely the first of this current line of PPVs).

Will always be remembered for his trilogy with "Irish" Mickey Ward. One of the best trilogies you will ever see as well as one of the first fights I recommend to people who tell me UFC is better than Boxing. He injured his hand in either the second or third fight and fought on. Sums him up.

Here are all the clips in playlist:

Tried to find an example of what to expecct but the video is kind of a giveaway and can't be embeded. Trust me on this one, if you want to watch what Nigel Benn woul describe as a tear-up, watch this. I cannot stress enough that these fights are all top 10 from 00 beyond.


RIP a true warrior and legend 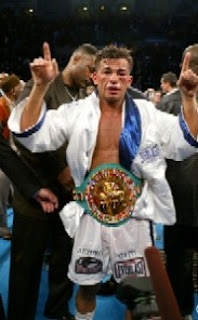