March 02, 2009
Well, this has another story; was meant to be on Monday night but got cancelled. So I'm at work the next day when I get a message saying they are available to be interviewed in 10 minutes!!! Once again, I'm not turning down the opportunity. Luckily I could organise my lunch break around the time so did that.

Halfway through the conversation, after much dodgy reception, the phone cuts out. Ring back... voicemail. Tried again... voicemail. Times running and my stomach is hollarin like "Yo bredrin, I runnin kinda low down here fam". Low and behold they called back and we finished it. Much respect to Gramps Morgan and the rest of the fam

Described as one of music’s most influential reggae acts around today, the "Royal Family of Reggae" Morgan Heritage have been a blessing to Reggae since they first graced the scene in the late 90's. With an array of influences ranging from Bob Marley and Peter Tosh to Green Day and Whitney Houston, their diversity is displayed for all to see through an abundance of hits spanning over 10 years.

From spiritual teachings on "Don't Haffi Dread," and heartfelt, romantic odes such as “Love You Right” to social-commentary, most recently on latest single "Nothing To Smile About." There is a song for every mood.The members of Morgan Heritage have returned with their 10th album, ‘Mission In Progress’.

Although produced in its entirety by Morgan Heritage, they have also enlisted help from Shane Brown (Mavado - 'Money Changer') and 17 year-old hit-maker Stephen “Di Genius” McGregor, (Mavado - 'Weh Dem A Do' and Daville - 'On My Mind') to help behind the boards on a few songs. Lyrically, ‘Mission In Progress’ finds the group continuing their quest to bolster their love for reggae music and promises to be the best reflection of the collective’s well-renowned live performances.

Marvin Sparks recently caught up with Gramps and the rest of the family to discuss the current Reggae/Dancehall scene, their recipe to success and the newly-released album.

For those who haven't heard of Morgan Heritage, how would you describe yourselves as a group and your sound?
To those who haven't heard of Morgan Heritage, we describe our sound as the Rockaz sound. It's like Reggae meets Rock music. It's Reggae music that has an edge and has a mixture of Hip-Hop, Punk Rock, Rock and Reggae but is predominantly a Roots Reggae sound.

What can we expect on the new album, Mission in Progress?
You can hear where we brought the live sound of our stage performance to the studio because many times we hear "Man, you guys sound better live than the record." So after touring on a Punk Rock tour in 2000 and 2001 we found that when you play their album is sounds like them live, you know? The same energy of high intensity and we were able to capture that on this record. It's out on the 14th April.

Which previously released songs will be included?
We have two singles out right now. One is called ‘Raid Rootz Dance’ and the other one is called ‘Nothing To Smile About’.What's your secret to churning out hits for over 10 years and staying relevant?It's just the humility. Never get high on your on own supply and just staying in the studio. Keeping focused and still making that music. Many times you find that artists get a hit and then they feel like that hit is supposed to carry them for a long time. You can never get high on your own supply and get amped up on your own music.

Do you ever feel pressured into producing another ‘Down By The River’ or ‘Tell Me How Come’?
Never, never, not at all! When we go into the studio we try to make sure the music is sweet to us and we’re very critical of our own music. So if it’s sweet to us then it will be sweet to the general public and we just hope for the best. But as long as you’re making music from your heart and your soul, everything will be alright.

What's your view of the current reggae scene now compared to when you first burst on to the scene?
Well to me I think that there is a lot of growth that has come into the music. A lot of young and new artists. The creativity has jumped a lot, especially in the Deejay (artists) and Dancehall world. The violence has grown a lot, but you know it (Reggae) continues to grow and Reggae music continues to evolve everyday

Any artists you'd recommend?
Definitely, I would recommend Busy Signal and Lutan Fiyah. Good artist’s them.You spend a lot of time touring. Outside of England and Jamaica, where else do you have large fan bases?Basically Western Europe. Every country in Western Europe. Germany, Italy France, Netherlands, Austria. We are currently working on our fan base in Eastern Europe, places like Czech Republic, Poland, Hungary, and Croatia. Those places are starting to open up to reggae music. Even places as far as Russia.

So when can expect to see you next in the UK?
We’re trying to arrange something for the near future, just keep your ears tuned and keep tuned in to Myspace.

Lastly, 3 reasons why should the reader buy Mission In Progress?
Well if you’re looking for a bit of fresh air in reggae music, then ‘Mission In Progress’ is a great album to have in your collection. If you been with us from the start and you’re looking for growth of Morgan Heritage and where we’re taking the music it’s a good album for you. And if you are a lover of Reggae music but never heard of Morgan Heritage it’s a great start for you. 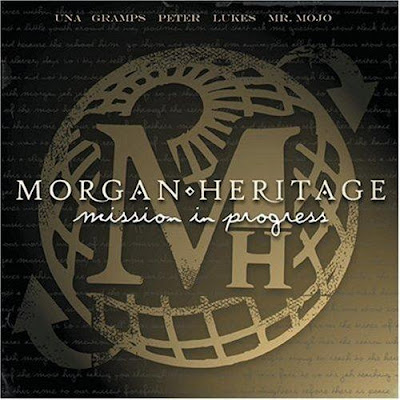 Mission In Progress is available in good stores now. For tour and general information visit the bands Myspace @ www.myspace.com/morganheritage