March 14, 2009
If you aren't familiar with the beef between Pimpin Curly and Officer Ricky, get familyar!

"We're steppin on your crew 'til the motherfucker's crushed
And making sweet love to every woman that you lust
I love to pay her bills, cant wait to pay her rent
Curtis Jackson baby mother aint askin for a cent
Burn the house down, you gotta buy another..."

Fifty responded with a (lame) diss to which Rick Ross issued a 24hour deadline to make another. Fif' declared war, telling Ricky he's going to end his career

Fiddy's first step was to interview Ricky's first baby moms, Tia, talking slick about Ricky being broke, which was later backed up by a financial affadavit released by Fif'. Took her and her bestie shopping for mink coats.

Second was going to head of Def Jam South DJ "We The Best" Khaled's mum's house and place of work. Why? Fif' claims Khaled put the battery in Rick's back to get publicity because Khaled's first release, Ace Hood, flopped.

'Look at the stretch marks on the stomach from Ricky's daughter''

"The nigga licking on the Ricky tattoo"

"That's the poom poom, punany, the puma, the pussycat"

"She bobbing and weaving Ricky like a professional fighter"

Too deep? I don't know but what I do know is this beef + Pimpin Curly has rejuvenated the previously lack-luster 50 Cent. He needs his own sketch show.

Back in 2001, Nas recoreded 'Ether', fast forward 8 years and this is probably the digital ages equivalent. Will Rick Ross's superbly produced Hip-Hop keep him afloat or will he possibly be the second career suicide of '09? One things for sure, people with cobwebs will stay away from Fif and his alter-ego Pimpin Curly 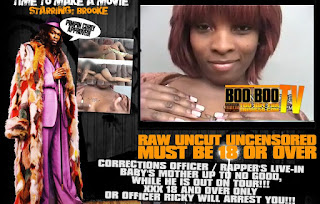