October 20, 2010
So basically I started writing notes for my MeView. If you haven't experienced a MeView (my view on a performance/concert) click here. It was going well until, well, Twitter became more interesting. I hardly watched the TV because I spent my time copy and pasting funny quotes from Twitter. I always tell people about the jokes I get from my timeline. Today I'm snitching on everyone I follow with a public account. (Disclaimer: YOU may have a private account but if it got RT'd by someone on my timeline with a funny tweet, then you are in here) Oh and one more (Disclaimer: I only realised the fact some may have private accounts long after. Apologies in advance. Holla at me and I'll remove your tweet).

I'd like to thank all of you, my unaware Tweeting contributors. Here goes the MeView x TweetView (snitchin'). I DON'T NECESSARILY AGREE WITH EVERY TWEET/OPINION. IF I THOUGHT IT WAS FUNNY OR INTERESTING I'VE POSTED IT. SOME I AGREE WITH, SOME I DON'T, ALL ARE WORTHY

RT = retweeted = copy and pasting someones tweet to show your followers, either to agree, it's funny or to add/correct/amend

Gwaan J2K performing with Mark Ronson. Lol @ him shouting out Roll Deep. This weird chick can't sing though. Oh ok, Manga too. Maybe this is the whole Roll Deep entourage with the platinum haired man. WE WANT AMY WINEHOUSE THOUGH! Mark Ronson without her is Jacobs Crackers without butter.

LMAO @ Wiley performing Cash In My Pocket! He hates this song. Dressed like me the last time I went to Liquid though. Tune lacks vibes. WE WANT WHEN I'M 'ERE NOW! Booooooooooooo that was boring. And why they keep cutting to a black audience in the dark? Don't they know all we see is teeth and eye balls?

World Cup 2010 in Africa, Ghana do well so Reggie Yates embraces his African heritage in public? (disclaimer: I never knew until this year) Why he roll out with four topless men without a no homo badge? And who the hell are Lebara Mobile? I see certain man handing out their cards. I never stop. Reggie's got jokes "Name checking Jason Derulo." Who's the random man singing (poorly) whilst Alesha Dixon walks out. And oh no, she looked so sexy until she spoke. Why does she have that voice Jah?

Ahahahaha @ them saying "You've only got yourself to blame if your favourite act doesn't win". That's in response to last year's shenanegans with Tinchy. I wonder if Tinchy's there today.

Sorry but why don't they have a comedian presenting? Reggie's to clean cut for this. It's all a bit sudden. Ohhhhhhh Grime Daily got a shout out!

Last years Best Newcomer Act JLS presenting this years award. Tinie Tempah has to get this. Strong category though. And yes Tinie Tempah wins. What's he gonna say in slow-motion. Well deserved. Ok, speech is a bit long, play the Grammy music. Oh safe, I kinda got a big up cos I wrote good things about him.

N-Dubz are them kids!

Peak! Reggie putting people on blast this year. LOL @ warning Alexandra Burke to keep her weave away from the lights.

Yeah so I missed a couple awards. African and JLS won something. Reggie introduced Alesha's single as smash hit. Which part? If she MC's I'm gonna punch my screen.

Nelly and Mohombi present an award

@PinBoardBlog PinBoardBlog.com
"i'll tell u why they got Nelly - because no other US act said yes. Lol. Simples. Trust."

Me in response to the above tweet: Not even Jason Derulo?

@PinBoardBlog PinBoardBlog.com
"i was offered an interview with the dude last week - not sure why I would have said yes. Sorry. It's not 2006."

Me: "Jazz Award should be given out on the Red Carpet"

@madnewsblog Janice Miss Mad News
"Who told Skepta that it was a good idea to wear an outfit that looked like something Cilla Black would have worn in the 80s?"

Plan B won something

Me: Peridot dancing. Atful (I'm not correcting that typo, sounds like a freshie 'Atful' haha) Dodger 'Re-e-wind' is still a dutty banger. Damage 'Ghetto Romance' = one of the best UK R&B songs ever. Romeo 'OH No' is greeease! Lethal B 'Pow' = classic. Dizzee Rascal 'Bonkers' = so yeah I've never understood breakin' to grime like they did to Pow!

@PinBoardBlog "gospel music is key to whats happening in the music industry"...Erm, really?"

@PinBoardBlog "these people talking about genres have absolutely not been briefed or told what to say. They ARE experts. #sideeye."

@MarvinSparks Negus Marvin Sparks
"If you aren't following @pinboardblog you're missing out on GOLD!"

@BROWN_EYEZ_UK BROWN-EYEZ.COM
"THE CROWD IS SHIT!!!! THE DONT KNOW WHAT THE HELL IS GOING ON ....BOOOO MOBO NEEDS TO BE AT BRIXTON ACADEMY!"

@PinBoardBlog PinBoardBlog.com
"ummm, I would LOVE to tell some stories about food on tables (which cost upwards of £2000). Hint: You don't get fed."

@MarvinSparks Negus Marvin Sparks
"When Reggie said "Jermaine Jackson's face", I looked up and saw Labrinth. Fully thought he was Jermaine for a sec. I'm not alone on that"

@MaleekBerry MR BERRY
"He got an MJ jacket on theaux lolol"

@missjaylouise Janay Louise
"Ahhh I like Tinie Tempah...always makes an effort with his performances."

@PinBoardBlog PinBoardBlog.com
"1 good artist on the stage for the whole night. 1"

@MarvinSparks Negus Marvin Sparks
"Awoe! Have to pay tribute to reggae ya mad"

Quote of the Show: Robbo Ranx "Reggae is one of the only music that still speaks for the common man"

@MarvinSparks Negus Marvin Sparks
"LMAO WHY THE HELL ARE THEY PLAYING A SCREWED VERSION OF MAVADO - LAST NIGHT?!"

@XianLoves ❤ Xi'an Loves ❤
"RT @ParYourFaceOff: WHO CLOCKED THAT 50 YEAR OLD YARDIE IN A SILVER DRESS WITH GREEN AND YELLOW FEATHERS IN HER HAIR? • Gyptians Babymadda"

@MarvinSparks Negus Marvin Sparks
Check my interview with Gyptian. Only one you need to check really http://www.mtv.co.uk/music/urban/242752-gyptian-the-interview

@Christiana1987 Christiana Mbakwe
"Feel like I'm in a time warp.It's 2003 and Nelly's forgotten to slap a plaster on his face. #Mobos"

@MISSLALAREPORT MISS LALA
"Ahhhh Nelly, I wud have preffered "Tip Drill" over that drival! Come better than this! I hv to pay TV licence to watch this, Cha!"

@KarlNova Karl Nova
"Nelly's performance is the worst of the night and it's not like he's wack it's just bland." 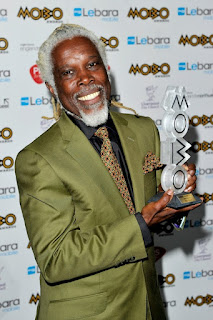 Thanks Metro (don't sue me)

@AraTheCoach Ara
"Billy Ocean is an absolute legend!!! And he could double as a baddie in Matrix! #MOBOs"

@Christiana1987 Christiana Mbakwe
"This crowd needs to pipe down, they're in the presence of a legend. He's giving knowledge. Be quiet. #mobos"

@MarvinSparks Negus Marvin Sparks
"Hold on, a Ras just gave thanks to Jesus? Not Jah or Selassie? Kinda plastic dread (no disrespect)"

@KarlNova Karl Nova
"Wow Wiley was supposed to be in the song! He was cut out!!!"

@DanBean Dan Bean
"is wiley ustreaming this one"

@Christiana1987 Christiana Mbakwe
"Two highlights of the Roll Deep performance? When they exited and the Louboutin's. #mobos"

@XianLoves ❤ Xi'an Loves ❤
"Scratchy has got a Croydon facelift!"

Reggie on JLS vs N-Dubz beef

@tahirah Tahirah
"Reggie...son...it's a bit hit and miss for you, this whole "comedy" malarkee, isn't it?"

@MarvinSparks Negus Marvin Sparks
Come on lads, own up, who woodn't?

@XianLoves ❤ Xi'an Loves ❤
"Looooool why are you benning at you OWNA DRY JOKES Kanya? #MOBOS"

@loudmouthmelvin Loudmouth Melvin RT by @AraTheCoach
"Kanya King = self promoting fool. What other awards organiser speaks at every show? She dont't care about UK Black Music."

@AraTheCoach Ara
"If I ever get up and talk at any Jump Off event PLEASE someone sniper me! #MOBOs"

Montage of previous years to celebrate 15 years of MOBO Awards:

@RioChiLondon Rio RT by @NicholasMarston
"Is it me or MOBO's got worse over the years?"

On Tinchy's performance (thanks PinBoard)

@tahirah Tahirah
"RT @RogerAjogbe: Imagine if Jay-Z charged for his stage swagger? He'd be getting money from everyone on this MOBO stage."

@Christiana1987 Christiana Mbakwe
"I didnt win a mobo after havin da highest selling urban single of the year and sellin over 1million singles this year, cool. F the MOBOs”

@MotiveUK Theo 'Motive' Oliver
"So that performance saved the show...kinda, not really but it was a lot!"

@AraTheCoach Ara
"RT @jessiejofficial: Can some explain to me what 'Urban' Music is?.... < pls let me know wen u find out, i think its basically anything!"

@ChuckieOnline Chuckie Lothian
"Look at our stars. Their ours. We don't need Americans anymore. Love that.!"

@reggieheavee Reggie Styles
"In all seriousness though...N Dubz better song than "Pass Out"...pls, never bun dwn a dance with one of their tunes ever!!!"

These times MOBO's finished 15mins ago

That ladies and gentleman was MOBO Awards 2010.

Once again, if you don't want your tweet up there holla at me. I repeat it was in a public place (unless I pasted it before realising your twitter is private). I feel you are deserve more followers after that. *Round of Applause* To follow them their twitter names are www.twitter.com/[insert name after @ sign]. Follow them allllll!

My predictions from earlier today are below with the actual winners. I didn't do badly

Winner: Gyptian (but we knew that from nominations)

"Thanks for the MOBO Award UK! It's an honor to win Best African Act having lived outside of the continent most of my life now."